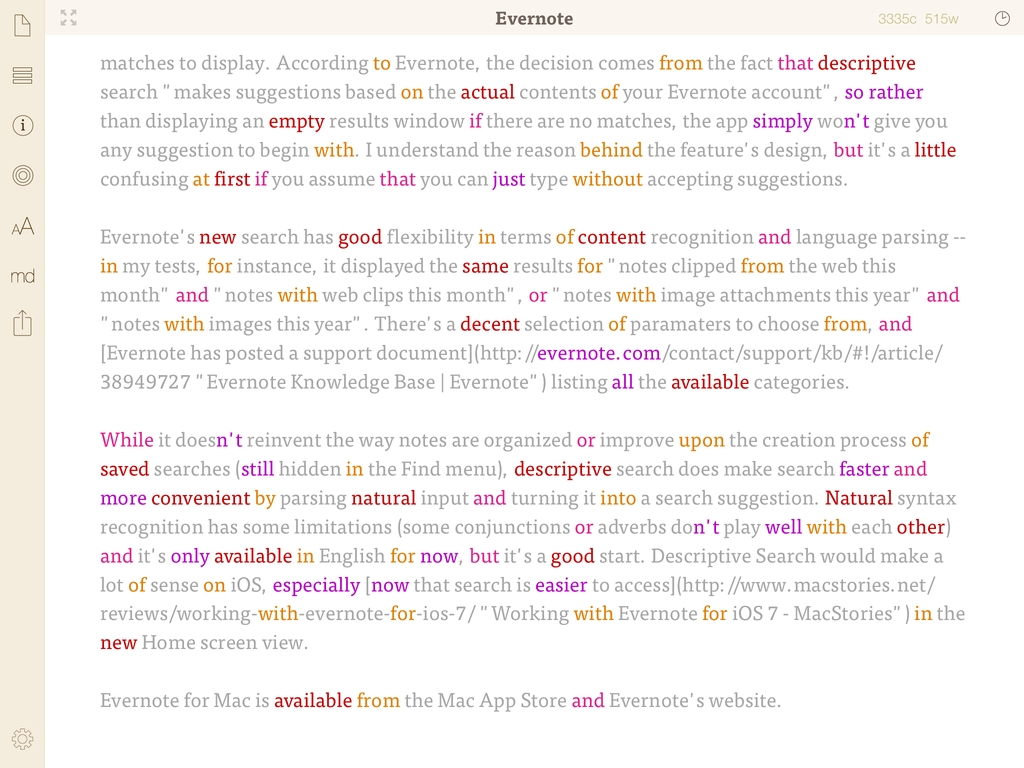 My iPad writing setup primarily consists of Evernote, Editorial, and WriteRight, three apps that I use to research, write & edit, and proofread my articles, respectively. For the past few months, I’ve been using Greg Pierce’s Phraseology 2.0 for iPad, which is out today on the App Store and which I consider a must-have companion app for people who write on the iPad and want to craft better text.

Phraseology isn’t primarily a text editor and it doesn’t need to be. We first covered the app two years ago, when Cody noted how the app’s distinctive interface design offered a calm editing environment for writers who wanted to inspect and rearrange text after the writing process. Phraseology is a companion to your regular text editor in that it can be used to write – possibly in MultiMarkdown, which the app supports – but it’s really meant to help you improve your writing. The app can give you a variety of statistics about text such as typical word and character counts, but it can also show you scores for reading ease and grade level, parts of speech that you’ve used, root word counts, and occurrences. In version 1.0, Phraseology had a handy Arrange feature that allowed you to drag & drop entire paragraphs with simple swipes directly on the iPad.

I’ve always considered Phraseology a fantastic addition to my writing tools, and version 2.0 introduces new features that have now become part of my workflow.

First and foremost, the app is ready for iOS 7 and it comes with iCloud sync and a Dropbox version browser. While the app is still iPad-only (and therefore the benefit of sync may not be immediately clear), it’s good to know that documents are backed up in the cloud and ready to access on another device. I don’t write in Phraseology – I just send text to the app and then return with updated text to my main text editor – but I’m glad Greg added a versioning feature. Similarly to what Ole Zorn did with Editorial, you can preview versions of a document saved in Dropbox, pick one, and restore it on your device whenever you want. I like it because if I change my mind about an edit I made in Phraseology, I can roll back to an old version with ease. Overall, the design of the app has been refreshed for the new OS, but its basic layout has stayed the same with a sidebar on the left and a popover to open your Phraseology documents; the entire app is unmistakably Agile Tortoise in terms of typography and color choices. 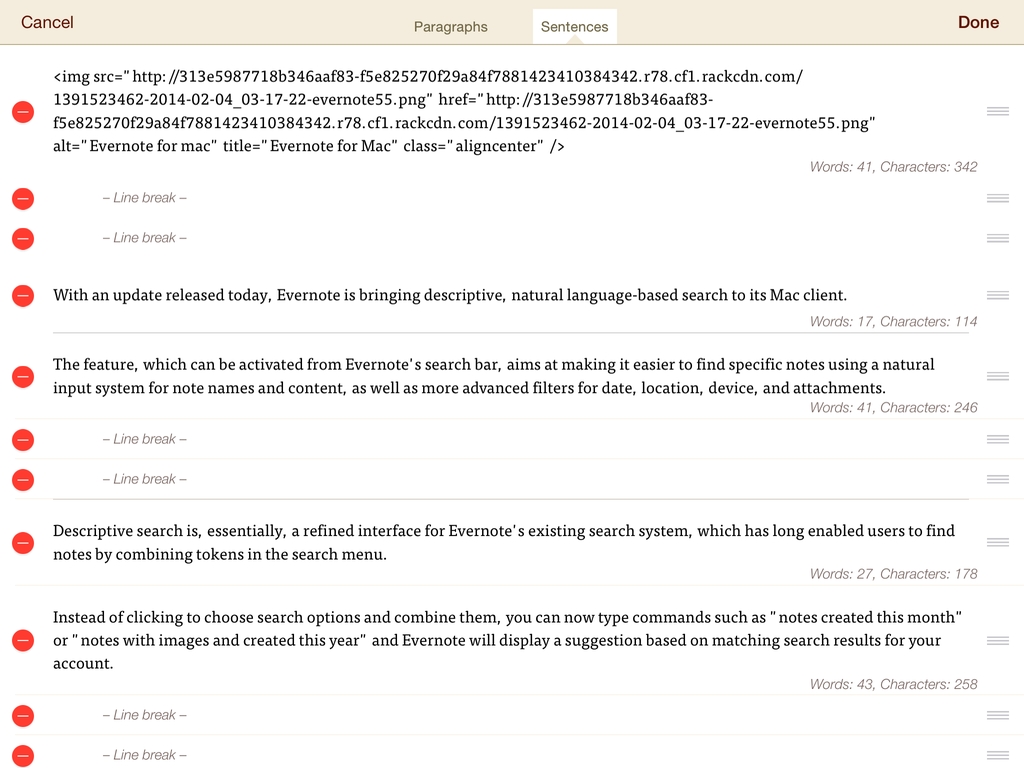 Unsurprisingly, Phraseology 2.0 comes with completely new inter-app communication features based on URL schemes powered by x-callback-url. Greg and other folks have already covered this aspect, but, in short, you can now send text to Phraseology from other apps, append and prepend text to existing documents, and trigger the app’s Inspect and Arrange features through URL schemes.

If you write in apps that support customizable sharing services like Editorial and 1Writer, you can understand the usefulness of sending text to Phraseology with one tap, inspecting and re-arranging text, and (for Editorial) sending back updated text automatically into the text editor. Greg has put together demo workflows for Editorial, which leverage x-callback-url to chain Editorial to Phraseology. And if you use Greg’s Drafts, the app now has built-in buttons for arranging and inspecting text in Phraseology, too.

My favorite feature of Phraseology 2.0, though, is the new part of speech syntax highlighting. Based on language APIs provided by Apple, Phraseology can now highlight with bright, distinguishable colors the following speech elements:

The selection of speech elements comprises all the ones I want to check upon, and Phraseology lets you highlight multiple items simultaneously – if you want to, say, highlight adverbs and adjectives without having to pick just one, you can do it.

Syntax highlighting is an important feature as I tend to overuse adjectives and repeat nouns when I write in English. When I’m done writing in Editorial, I can send text to Phraseology, hit the highlight icon, and see an overview of the parts of speech that I’ve used thanks to dimmed body text and colors for highlights. While Phraseology doesn’t let you replace words with synonyms/antonyms like WriteRight, I find the possibility to highlight multiple parts of speech extremely convenient and well implemented from a visual perspective.

One minor quibble that I have with the feature is that Phraseology can’t exclude URLs from syntax highlighting. Because I don’t write in Phraseology, when I send MultiMarkdown text to the app I always end up with formatting for image URLs, inline links, and other HTML code that I need to embed in my articles. Phraseology’s highlighting tool will also highlight words found in URLs and Markdown links (as shown in the screenshot above), which I think could be improved upon by filtering out parts of text that are recognized as Markdown syntax.

With Phraseology, Drafts, and Terminology, Greg Pierce has built his own ecosystem of apps aimed at writers and enhanced with callback-based inter-app communication features that, while not optimal for the future of iOS, work today. Combined with apps like Editorial and 1Writer, Agile Tortoise’s apps provide excellent features for writers and they can be easily integrated with other apps and workflows that can save time and make you more efficient on iOS.

Phraseology 2.0 is a great update, with syntax highlighting being a clever solution to the common problem of part of speech repetition and overuse. Phraseology 2.0 is only $1.99 at launch, it’s a free update for existing customers, and I highly recommend it if you write on the iPad.