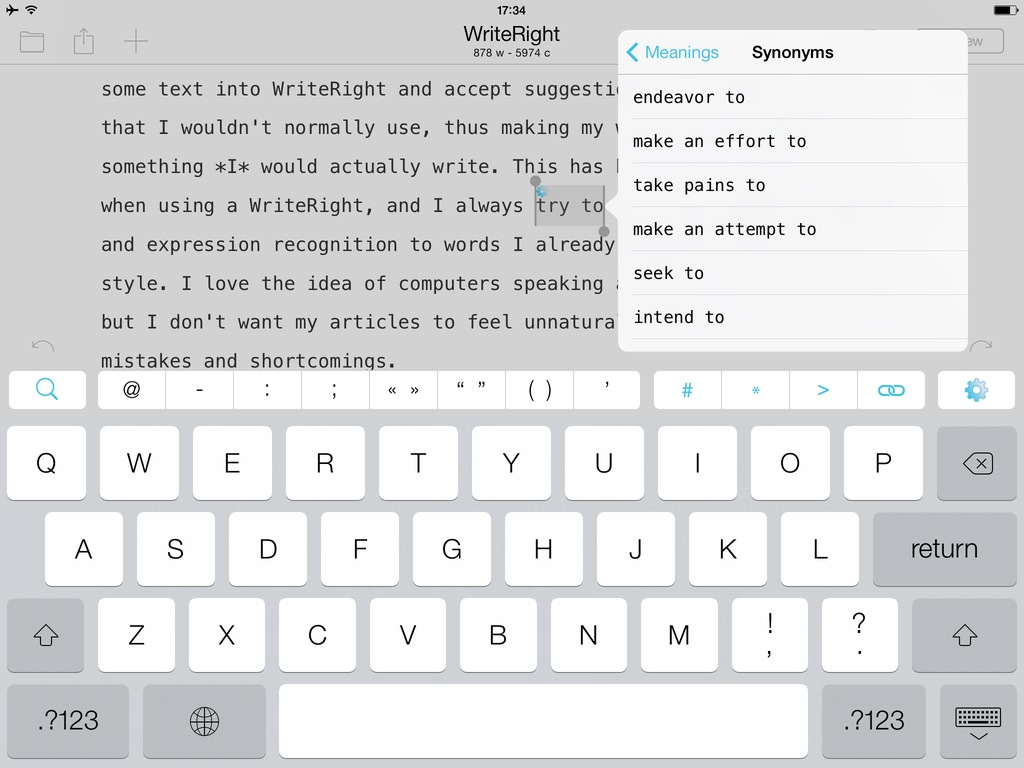 A $2.99 app available for iPhone and iPad, WriteRight is a text editor that, instead of offering powerful Markdown tools or customizable sharing features, focuses on providing synonyms, antonyms, and other phraseology-related features through a built-in grammatical engine that supports both English and Spanish.

I’ve been using WriteRight to edit my articles since early December, and while the app has some notable issues with Dropbox sync and Markdown previews, I believe the tools it provides can be useful once you realize that WriteRight is no alternative to Editorial or Byword. I’m using WriteRight alongside Editorial and Phraseology, and I like the unique features that make it different from other text editors.

You can use WriteRight as a Markdown text editor with Dropbox sync, but my experience with that hasn’t been great. I often ran across sync errors when trying to import files from Dropbox, and the app doesn’t support any kind of syntax highlighting for Markdown (for hyperlinks and other formatting). Even if it has an additional keyboard row for text editing, it would be unfair (and ultimately pointless) to compare WriteRight to what Editorial offers. I find it difficult to evaluate text editors in a post-Editorial market, mostly because the bar is too high at this point. But what WriteRight does in terms of grammatical analysis and text substitution has allowed me to use it as a complement to my Editorial writing setup – even if I could, I wouldn’t want to replicate WriteRight’s features with Python scripts or workflows.1

WriteRight gives you synonyms and antonyms for the currently selected word, but it can also scan text for multiple-word expression or phrasal verbs and offer you alternatives inside a contextual popup. The key aspect is that in offering suggestions for words with the same/opposite meaning of your selection, WriteRight can also detect conjugation, plural, tense, or person and insert a replacement based on what’s appropriate. These suggestions work either through custom buttons in the Copy & Paste menu for synonyms and antonyms, or by tapping a gear button to show multiple-word replacements for each sentence.

For instance, if you tap the gear icon in a sentence that contains “I know that”, WriteRight will offer “be aware that” as a suggestion; tap it, and the app will insert “am aware that”, because it recognized the first person and tense of the verb you selected. Same goes for other tenses or persons, although I noticed that the app would occasionally fail to recognize “they”, using “was” instead of “were” for past tenses or “I are supposed to” in present tense. This needs to be fixed soon; overall, I found the app’s grammatical substitution engine for multiple-word expressions quite flexible and impressive – especially when it successfully changedk expressions like “I’m able to access” to “I’m capable of accessing” with the tap of a button. I could go on with the examples, but the English language wouldn’t fit in an article.

According to WriteRight’s developers, the app comes with:

That’s for the English language alone. In my tests, WriteRight recognized a lot of expressions and was especially capable with synonyms as the raw numbers suggest. Of course, it would be great to see the app keeping up with modern expressions and meanings, perhaps organizing them by subject (in case you’re wondering, there is no synonym for “selfie”).

When I’m done writing in Editorial, I like to do my second round of proof-reading in WriteRight to change expressions that I use too much and spice up my writing a little bit with synonyms I should use more. The problem is that I need to be careful with that: it’s easy to import some text into WriteRight and accept suggestions for words or verbs that I wouldn’t normally use, thus making my writing less like something I would actually write. This has been a concern of mine when using a WriteRight, and I always try to limit my usage of synonym and expression recognition to words I already know and that fit my style. I love the idea of computers speaking a better language than us, but I don’t want my articles to feel unnatural – even in their styling mistakes and shortcomings.

As a text editor, WriteRight is disappointing when compared to Editorial, 1Writer, or Byword. I’m okay with that, but I think the developers should fix issues with Dropbox importing and at least figure out a way to exclude Markdown links from being analyzed grammatically. The text tools that WriteRight offers for word meanings and inline replacements aren’t perfect, but they work well overall and, in some instances, are fairly impressive. WriteRight is $2.99 on the App Store.