A full-fledged task manager is terrific for many projects, but if you dump your entire life into one, it can quickly become a cluttered mess. At the same time, if you’re focused on a big project, it’s easy to let everything that’s not in your task manager slip through the cracks. One strategy for attacking the problem that has worked well for me is using a separate, lightweight app for tasks like remembering to take out the garbage, pick up medicine at the pharmacy, or publish an article when an embargo lifts.

In the past, I’ve used Due on the iPhone and iPad for these sorts of tasks. There has been a Mac version of Due for years too, but it hadn’t been updated in about two years and was showing its age. However, with today’s update, Due for Mac joins the iOS version with a fully-modern design and slate of new features, putting it on par with the outstanding iOS version, which I’ve covered in the past.

If you’re not familiar with Due, the app’s strength is the ability to create reminders and timers quickly. Reminders can be one-off or repeating events and can be entered using natural language syntax that auto-populates the due date and time field. According to the developer, Due’s natural language engine has been improved with today’s version 20.1. 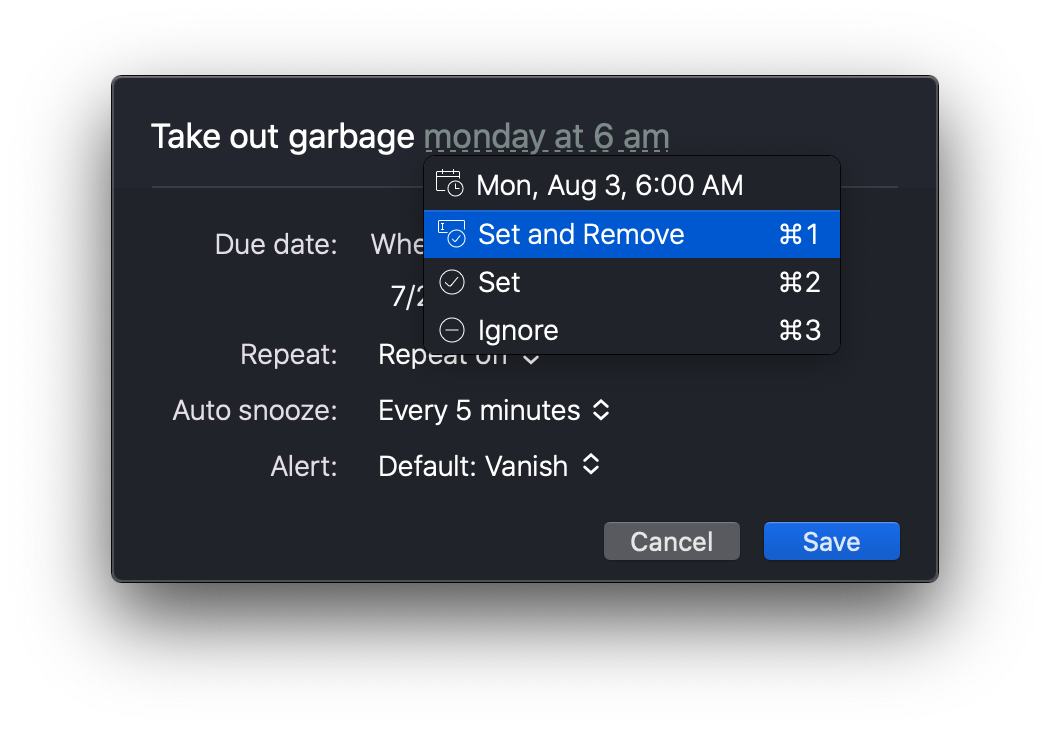 Due detects dates and times and gives you options for how to treat them.

My favorite touch here is that when as you type a due date or time into a new reminder, Due provides keyboard shortcuts to set the date and time and then remove the date text you typed, set the date but leave the text in the reminder, or ignore the typed date text altogether. I use these options to do things like set reminders that contain a deadline in the description but will go off in advance of the deadline. For example, I can set a reminder to ‘Publish article at 10 am’ ignoring ‘10 am’ and then typing ‘9:45 am’ and using that as the time for an alert.

Another of Due’s hallmarks is the ability to auto-snooze reminders and timers. For important tasks that need to be completed on a schedule, auto-snooze is terrific because it will remind you at regular intervals that an item is due or a timer finished running until you shut it off. Rescheduling a reminder is simple, too, using keyboard shortcuts, the right-click menu, or menu item to delay it 10 minutes, 1 hour, or 1 day. 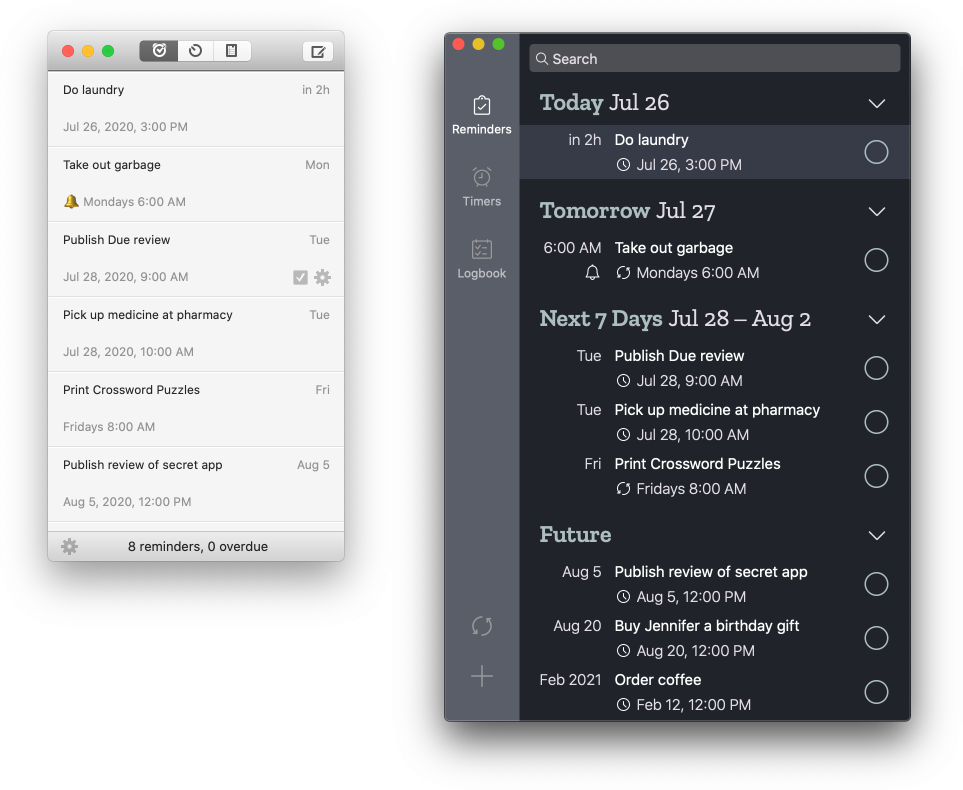 The difference in design between Due before (left) and after (right) its update is striking.

The difference between the old version of Due and version 20.1 is apparent immediately upon opening the app for the first time. Due has dispensed with the top and bottom window chrome. Instead of a toolbar at the top of the window, there’s a narrow sidebar for navigating the app’s sections and creating new reminders or timers. A search field also spans the top of the window, which is a terrific addition for quickly locating a reminder or timer if you’ve got an extensive collection of either. 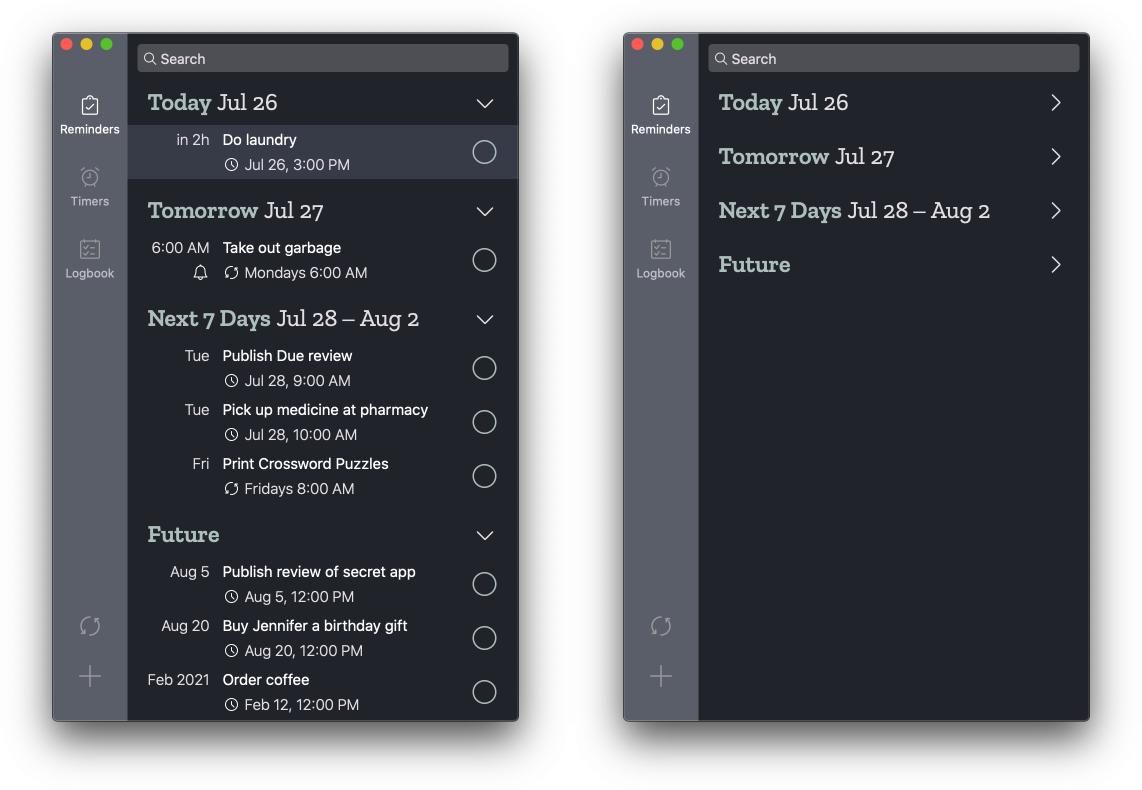 Reminders are organized into four temporal categories that are collapsible.

Reminders are now organized automatically by due date into four categories: Today, Tomorrow, Next 7 Days, and Future. Each category can be collapsed with the disclosure triangle next to its heading, allowing you to focus on one section at a time, which is another nice touch for those with long lists of reminders. Readability is also enhanced by the ability to adjust text size in the app’s Preferences.

Due’s redesign extends to its use of typography and color too. Each reminder category features big, bold titles that break up your list of reminders into meaningful sections. The default theme is Vanilla Lilac and features a light purple sidebar and section text against a light window background. The app includes another light and two dark themes, all of which I like a lot: Lavender, Slate Dark, and Pure Black. There’s also an option to switch themes based on your Mac’s light/dark mode settings that lets you pick whatever combination of light and dark themes you prefer. 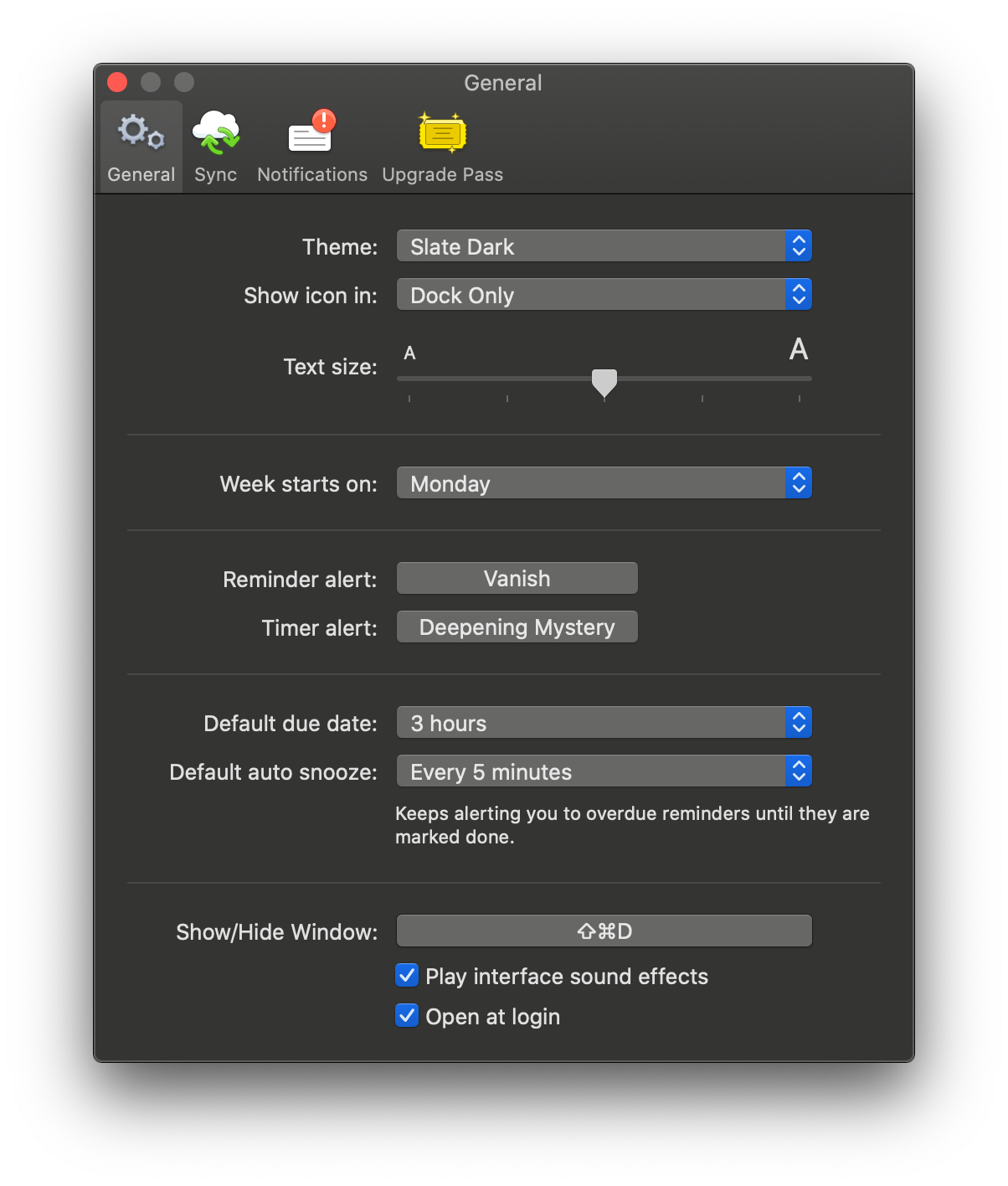 Due is highly customizable.

The redesign of Due is a significant leap forward and an excellent illustration of the importance of design. Mac app design had long since passed by the previous version of Due. With version 20.1, Due not only feels at home among other modern Mac apps, but it’s easier to navigate and visually superior to the previous version’s approach.

Due’s update on the Mac runs deeper than just its new design, though. There are new features too. Due can be run exclusively from the menu bar if you prefer that to seeing its icon in your dock. I try to limit the number of apps in my menu bar, so it’s not a feature that I’ll use, but it’s a nice option to have. Instead, I run Due as a standard dock-based app that launches on login and use a custom global keyboard shortcut to quickly bring the app to the foreground. 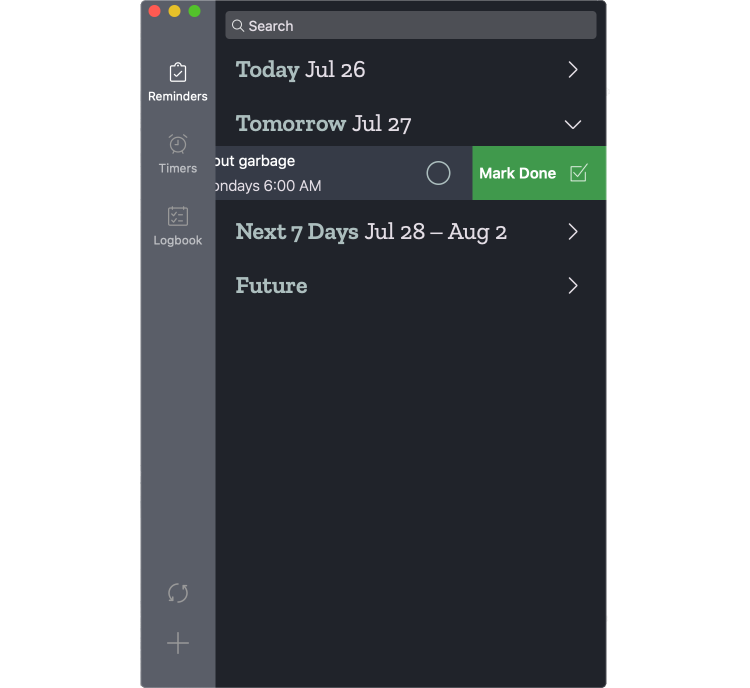 Like the iOS version, Due for Mac supports gestures.

The app has also added gesture support, allowing users to swipe left on a trackpad with two fingers to mark a reminder as complete and swipe further to delete it. The same gesture is used in timers to reset a countdown or delete a timer. Bulk editing is available now too. Simply highlight several reminders at once to mark them all as complete, reschedule or delete them, or change their alert and auto-snooze settings.

Due for the Mac has adopted the same sort of business model as its iOS and iPadOS counterpart. The Mac app is a separate $14.99 purchase from the iOS and iPadOS version and comes with one free year of updates from the date of purchase. After that, for an additional $9.99/year, you can purchase the app’s Upgrade Pass to receive upgrades for an additional year. If you stop subscribing, any feature updates you get through the subscription will remain available.

It’s times like this when I turn to Due. Many of the things I drop into the app are one-off reminders. Others are the kind of repeating tasks that are all too easy to forget about if I’m deep into writing or some other task. However, I also turn to Due for things that absolutely need to be done by a specific time. I use this sparingly, but auto-snooze is a fantastic way to ensure something gets done when it needs to be, especially since it syncs over iCloud so my reminders follow me wherever I happen to be. If you’ve ever needed a little extra prodding to get something done on time, Due is an excellent solution.