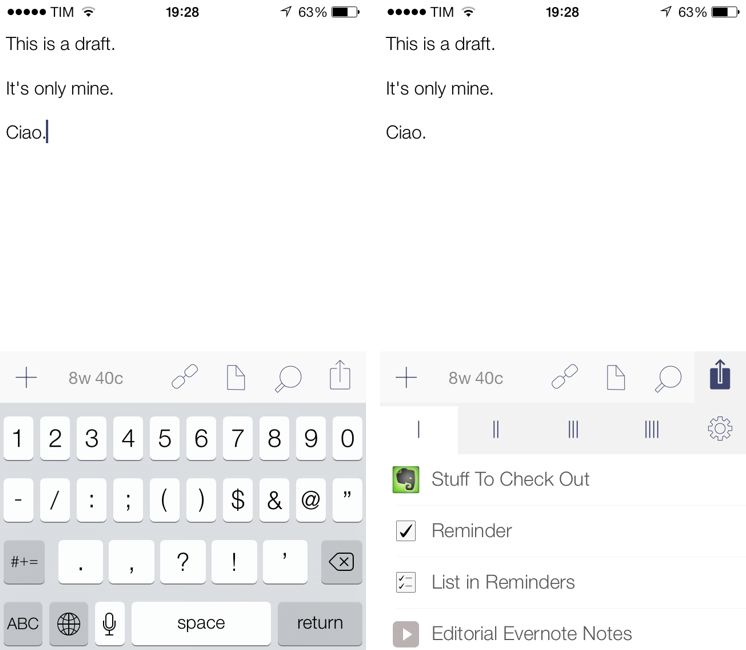 Drafts for iOS has singlehandedly reinvented, alongside Editorial, my iOS workflow. With a combination of URL schemes and custom actions, direct Dropbox and Evernote integration for saving text, callbacks, and a fervent community of passionate users pushing the app to its limits, Drafts has become an extremely powerful iOS notepad without losing its basic simplicity. Drafts is the perfect example of an app that is easy to use and approachable but that power users can tweak and enhance if they know where to look.

With the release of iOS 7, developer Greg Pierce has decided to make Drafts 3.5 an iOS 7-only app that includes an updated design and some new features for power users. This will likely be a controversial decision among users who won’t update to iOS 7 right away, but I certainly understand the motivation of wanting to move forward as fast as possible by promptly embracing our iOS 7 future.

Drafts didn’t have much custom UI to begin with, so this new version’s most visible changes are the keyboard, which defaults to the iOS 7 one, and the revised icons and menus that match iOS 7’s new design trends and guidelines. Icons are thinner, the Settings’ cells run from edge to edge, the On/Off switches are new, the status bar blends with the writing area, and there’s a lot more whitespace. After having used Drafts 3.5 for a few months, I would say that, in the transition to iOS 7, it has lost less than Pierce’s other app, Terminology, in terms of identity and personality. Drafts was already spare and clean-looking – iOS 7 just makes it official and takes the app’s whitespace up a notch. Overall, it’s still the same Drafts, now with new icons and an updated keyboard.

The additions to Drafts 3.5 should please power users and those who rely on Drafts as an application launcher more than a note-taking app.

A notable new feature is the possbility to launch empty actions: if you just want to launch an app or website from Drafts – something you’d normally do from Launch Center Pro – you can now do that just by tapping on an action’s name, and Drafts won’t give you an error. This can also be nice for actions that don’t require you to type, but that actually use tags like timestamps or or the contents of the clipboard to launch seemingly empty actions.

You can now tap & hold the “+” button above the keyboard to get a contextual menu with options to create a new draft, a new one from the clipboard or the current selection, or import a text file from Dropbox. The last option is interesting, as it uses the new Dropbox Chooser to take you to the Dropbox app, where you can pick a text file to send back to Drafts. The behavior can be a little confusing in that you can try to pick any file from Dropbox – such as an image or .zip archive – but Drafts only supports plain text. I would have liked the possibility to filter down the Chooser’s results to just plain text files, but I guess that the convenience of accessing your entire Dropbox trumps my minor nitpicking.[1] 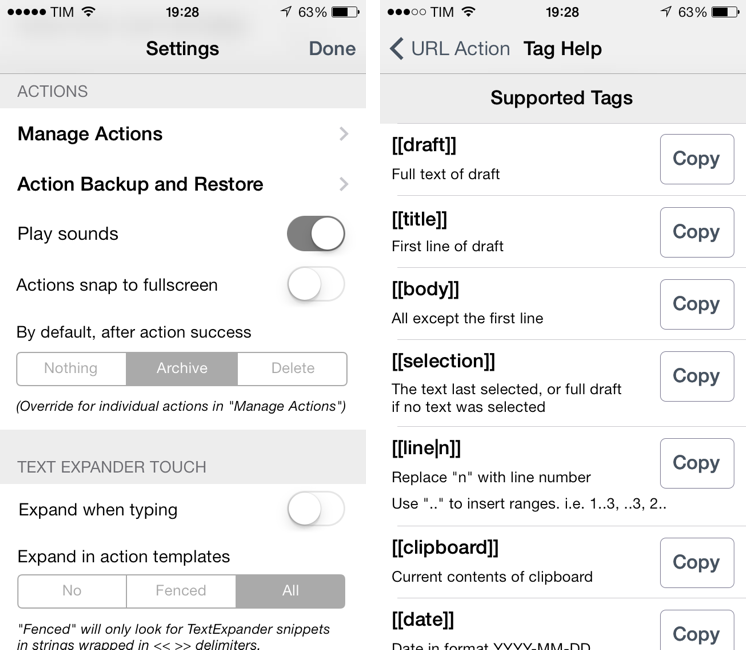 There is some new stuff in the tag department as well: there is a new selection tag to indicate the currently selected text in a URL scheme, and line tags now support ranges to specifically indicate the range of lines you want to pass to a URL scheme. For instance, [line|2..5] will grab lines 2, 3, 4, and 5, whereas [line|..5] will get the first five lines of a draft. This is some pretty advanced and niche functionality that’s clearly targeted at power users – personally, I haven’t found a use for ranges in line tags yet, but I’m sure that Alex or Eric will come up with something neat.[2]

Drafts 3.5 is an iOS 7-only app that isn’t revolutionized by iOS 7. There are some nice changes, but mostly they’re aimed at making the app work better, and not drastically change under iOS 7. Drafts feels more spacious and elegant thanks to iOS 7’s white theme and status bar, but I also think it could have used newer animations or support for Dynamic Type (specified in iOS’ Settings). There are some parts of Drafts that, compared to Pierce’s work on Terminology for iOS 7, now feel excessively static, such as the sharing panel, which is unchanged from iOS 6.

Drafts 3.5 remains a powerhouse of iOS automation, but I’m looking forward to more iOS 7-only features.

Drafts 3.5 is available on the App Store.