We previewed the new version of Daisy Disk for Mac back in November and I’ve been running the app on my computer since then. At regular weekly intervals, I’ve found myself using Daisy Disk 2 to take a peek into my Mac’s hidden and mysterious locations and see what was eating up all that space. Sometimes it was an iTunes backup. Sometimes it was a folder full of new apps to try. Most of the times it was just junk. Daisy Disk 2, with its gorgeous “sunburst” interface and file deletion functionality, provides a great way to “visually” know what has to be trashed on your machine. 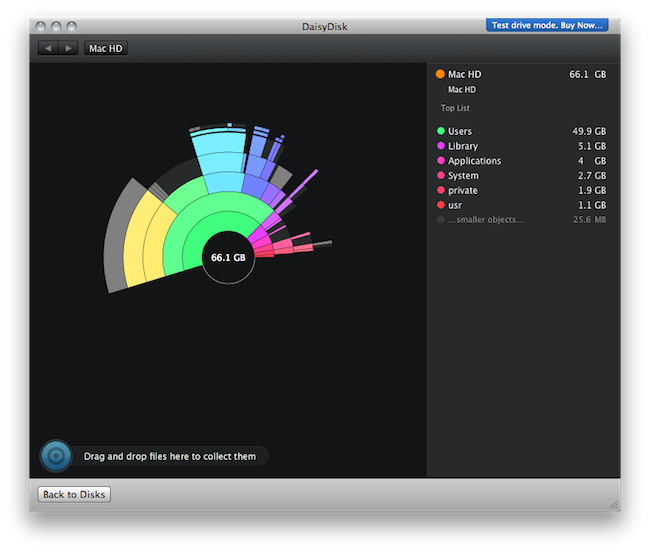 As we noted in our preview when the Daisy Disk team gave us the chance to try the update, the UI has been rewritten from scratch on Core Animation to offer better handling of drag & drop for files and folders, and in-app deletion. Unlike the first version of Daisy Disk – which only allowed you to see what was consuming space on your Mac, then open it in the Finder – you can now collect files to delete within the app. The collector resides at the bottom of the sunburst map, and can keep any folder of file you’d like to get rid of. As you drag “petals” (representations of files, and folders) out the map, Daisy Disk also updates its information in the right sidebar. Everything happens fast, in real-time, with smooth animations.

The best thing about Daisy Disk 2 is that, really, it doesn’t need much talking. It just works. Sure it’s beautiful and we could spend a dozens paragraphs about that, but in the end it simply helps you recover space on your Mac. If you don’t think dragging petals is your thing (how could it not be?), you can also do stuff with keyboard shortcuts and right clicks. If that’s not enough, you can QuickLook items and enclosing folders from DaisyDisk as if it was the Finder. Makes navigating across petals and sections even easier.

So is this public beta of Daisy Disk 2 perfect and worth a download? It sure deserves a try on your machine. There are a few bugs that still need to be squashed (that’s what betas are for, remember) and I’m sure the devs will add some extra refinements come the final release in 2011, but as I said in my preview: Daisy Disk is both beautiful and useful.