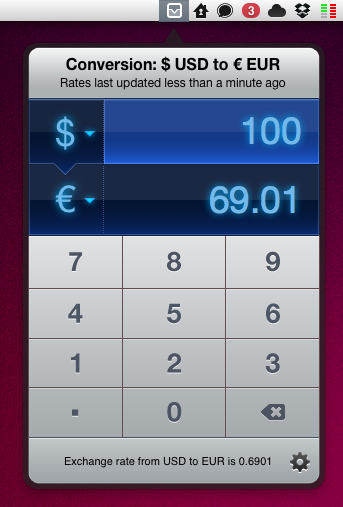 Being based in Italy, I have to deal with currency conversion on a daily basis. Most of my digital purchases are made on US websites, and either for work or personal purposes, more often that not I find myself going through my credit card billing statement to re-convert expenses from Euro to United States Dollars. As you can imagine, being able to easily and accurately convert currencies in seconds in the first place has become an essential part in my workflow. Currencies, a new app by Edovia released today on the Mac App Store, aims at making currency conversion super-simple from the OS X menubar with an interface design heavily inspired by iOS apps and multitouch.

In fact, Currencies for Mac comes from an iOS counterpart already available in the App Store. The app has been “converted” using The Iconfactory’s Chameleon engine, which allows developers to port the UIKit – the framework used to write apps for the iPhone and iPad – to the Mac. We’ve seen another example of Chameleon in action before, Carousel for Instagram. In a similar fashion, Currencies looks like an iPhone app inside an iPad popover menu running in the Mac menubar – a mix of interface schemes and devices that’s actually fun to use and once again hints at where the Mac platform is going. In the next few years, when Macs will be touch-enabled and even more similar to iOS devices, we’ll look back at this transition period, OS X Lion, iOS 5 and Chameleon. 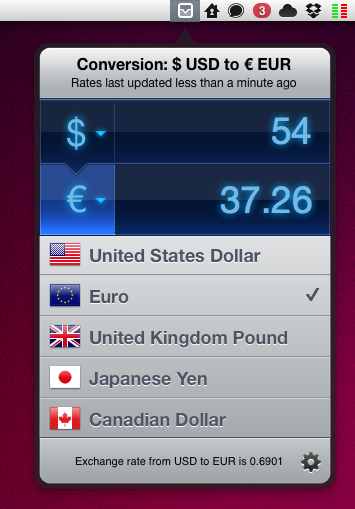 Currencies is very easy to use. One click on the menubar icon, and the app becomes visible to reveal two tabs for the currencies you’d like to convert. To type, you can either use the on-screen keyboard or your Mac’s one. To change currencies, hit the symbol and select a new one from the list – the design is nice and elegant. That’s it. The app has some preferences to choose a keyboard shortcut and a refresh time –  the app relies on Yahoo for its conversion rates, supports 130 currencies and dots / commas for decimal separation.

Should you buy Currencies when your web browser takes seconds to open a currency converter and do the job for free? There’s no doubt you’ll be just fine converting units on a website like Yahoo Currency Converter or Xe.com, but if you care about good design, usability and are intrigued by the whole concept of iOS apps running in the Mac’s menubar, you should give Currencies a try. Go download the app here at $2.99 – you can find the iPhone version at the same price here.