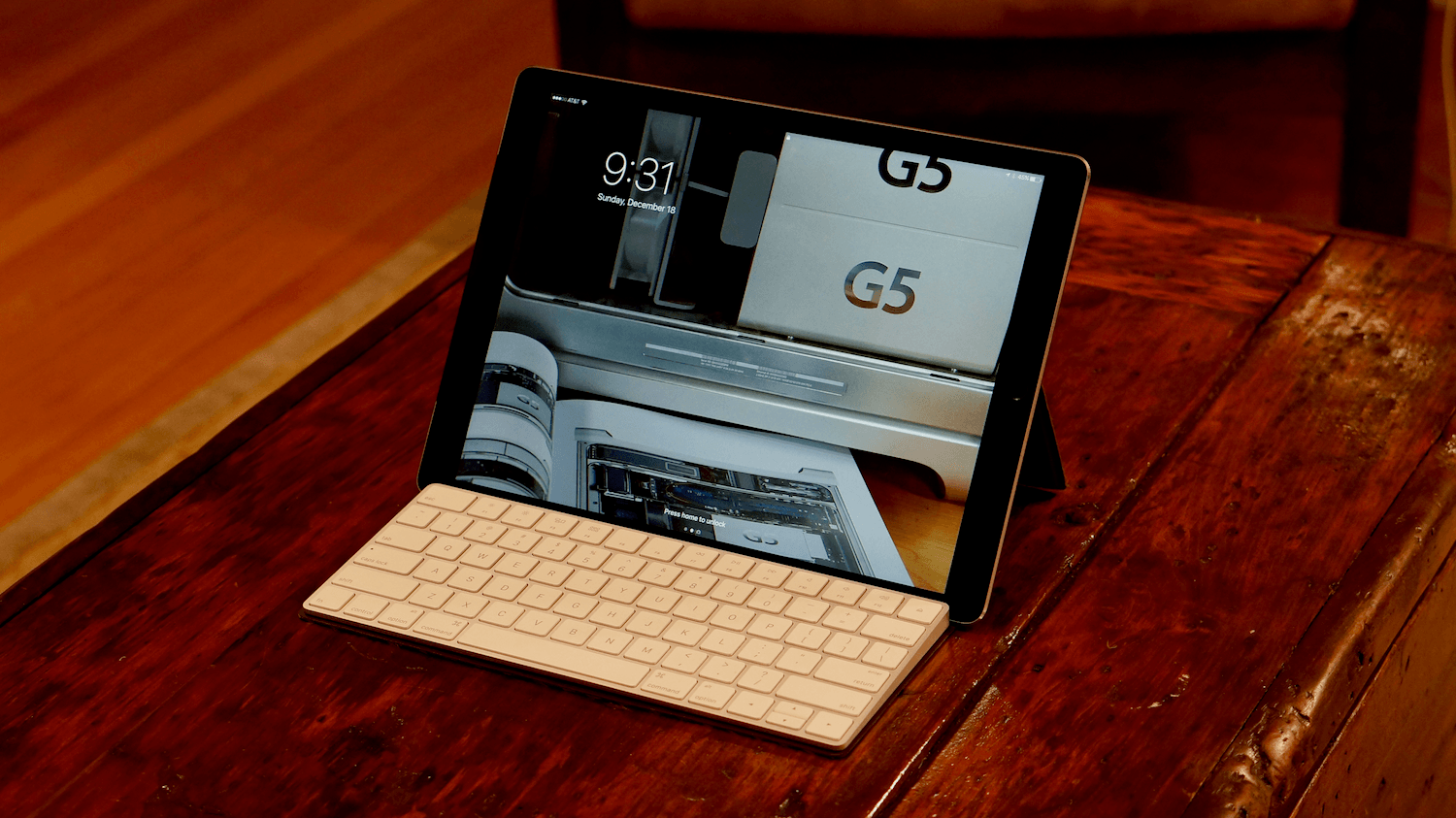 I’ve been carrying Studio Neat’s new Canopy, a combination keyboard case and iPad stand, for about a week. It’s the first time Apple’s Smart Keyboard has been off my iPad Pro since I got it, but I haven’t missed it at all. There are still certain situations where I prefer the Smart Keyboard, but I love having the option to work on my iPad with Apple’s Magic Keyboard when it suits my needs. So, while I won’t be switching to a Magic Keyboard/Canopy combination full-time, it’s a choice I’m glad to have and one I will use frequently.

I used an Incase Origami keyboard case with the original iPad. Apple’s previous-generation wireless keyboard was propped up at an angle by a barrel that housed the batteries used to power it. With the Origami, you popped the barrel of the keyboard into clips on the case to hold it in place. The case was divided into two panels that wrapped around the keyboard and closed with Velcro. The case’s name derived from the fact that you could fold back the two free corners of the case and attach them to each other with Velcro to form a pyramid-shaped stand. The case worked well, but it was a bulky solution because Apple’s previous-generation wireless keyboard was larger than the current Magic Keyboard. 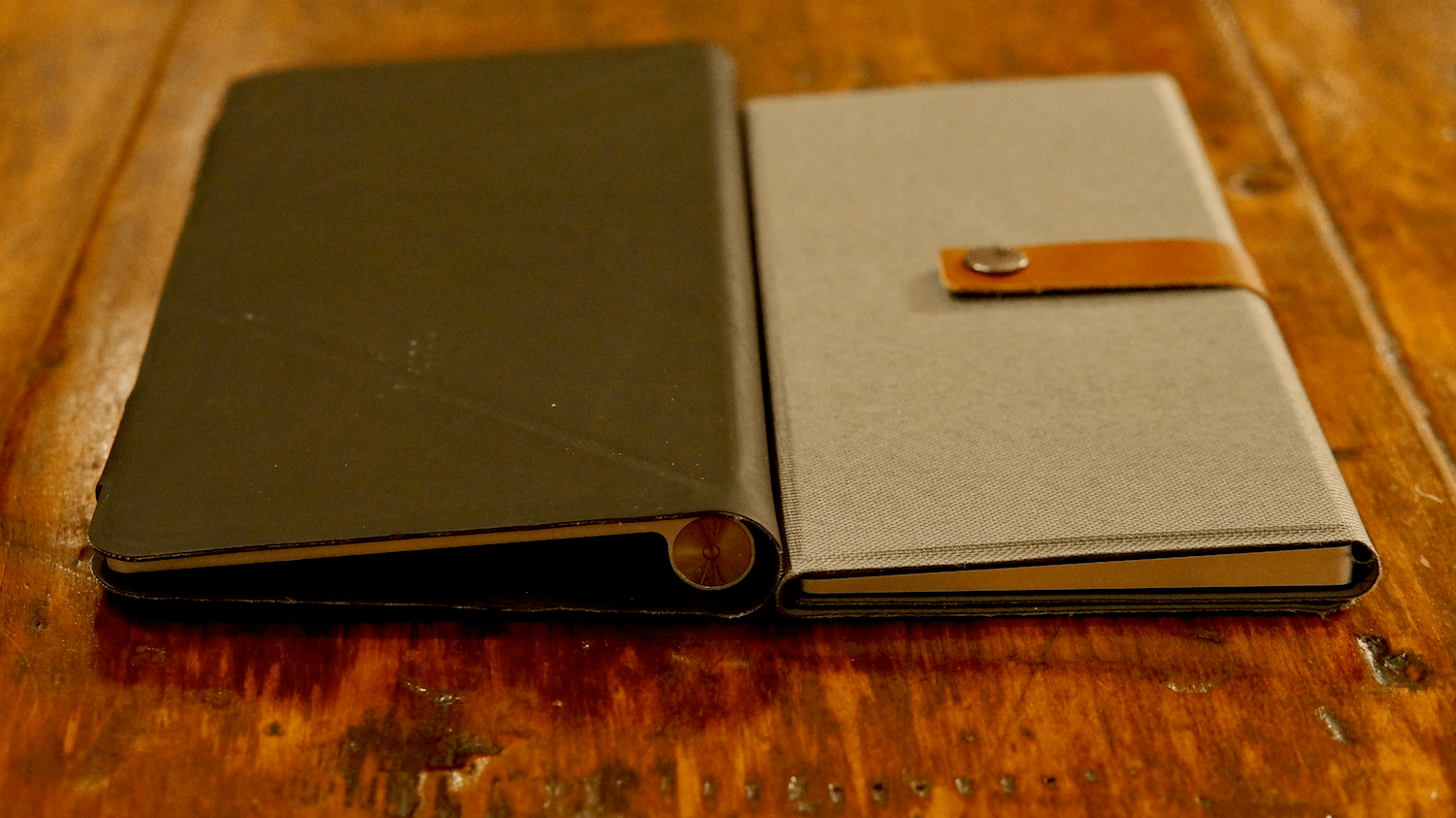 The Canopy is an evolution of the ideas pioneered by the Oragami case that improves every aspect of it. The case has a three-panel, hinged design. Laid flat on a table, the Magic Keyboard attaches to the bottom third of the Canopy with micro-suction pads, which Studio Neat uses in some of its other products. If you haven’t seen micro-suction pads in action, they have a tacky surface that holds the keyboard in place remarkably well. Better yet, you can remove your keyboard without leaving any residue on it and reattach it without the micro-suction pads losing their stickiness.

The exterior of the Canopy is made of what Studio Neat describes as synthetic canvas. It’s a nice material that feels durable and has held up well in the week it’s been banging around inside my bag. The interior is a microfiber fabric that isn’t as soft as the inside of an iPad Smart Cover, but is soft enough to protect the Magic Keyboard. The panels themselves are stiff, but flexible; a little like the panels of Apple’s Smart Cover, but thinner. The case wraps around the keyboard and is held shut by a leather strap with a snap. 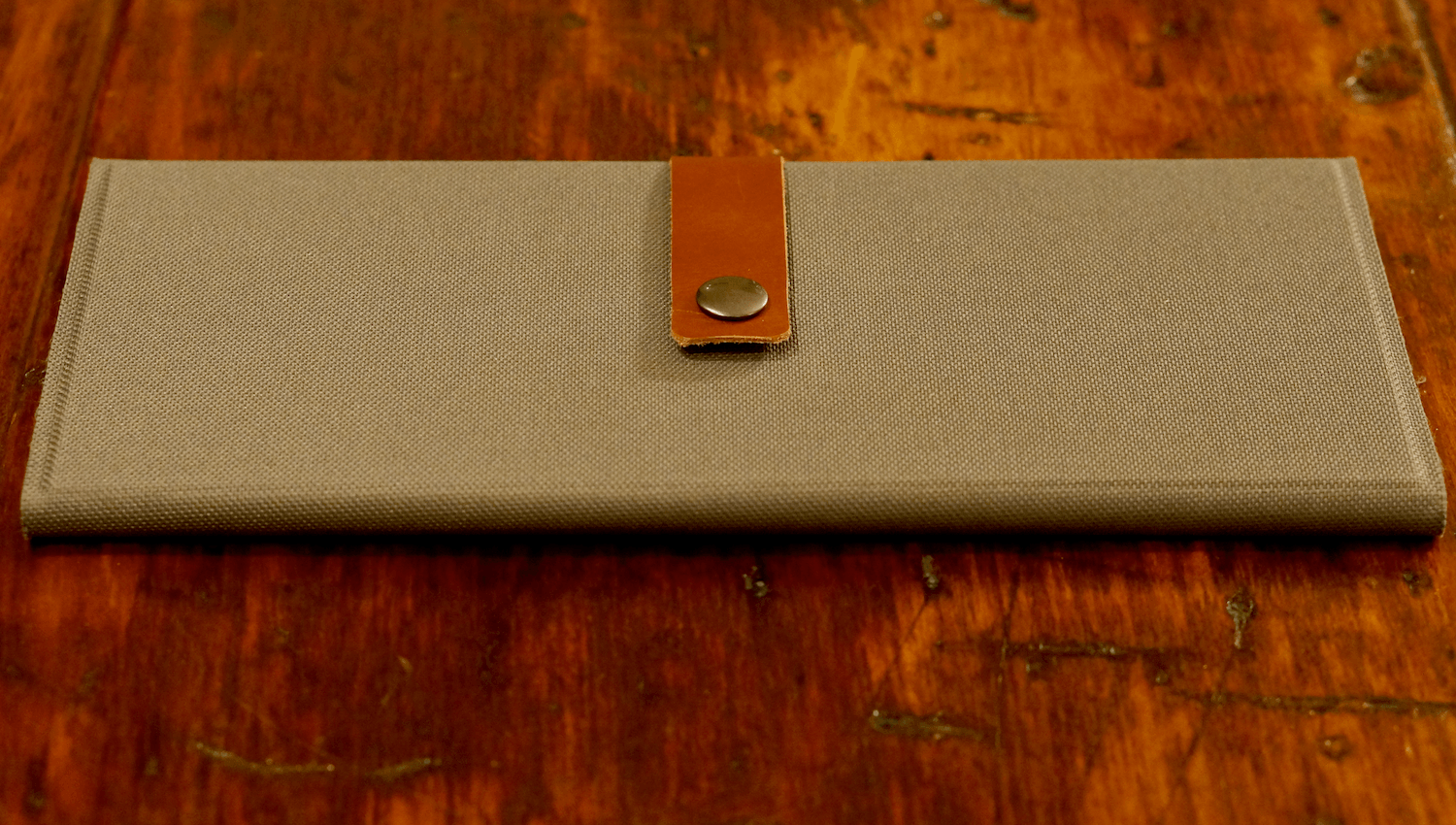 The fit between the Canopy and Magic Keyboard is perfect. The stiff panels surround the keyboard with a small amount of overlap at the edges that helps keep things from hitting the sides of the keyboard. However, the close fit also means that the Canopy only works with Apple’s Magic Keyboard.

Converting the Canopy from a case to a stand is easy. Open the case and fold the two top panels backwards into a triangle. The same strap that holds the Canopy closed as a case attaches with the snap to form the base of the two-panel triangle that acts as a stand. The hinge between your keyboard and the middle panel of the Canopy forms a slot into which you can drop any iOS device. 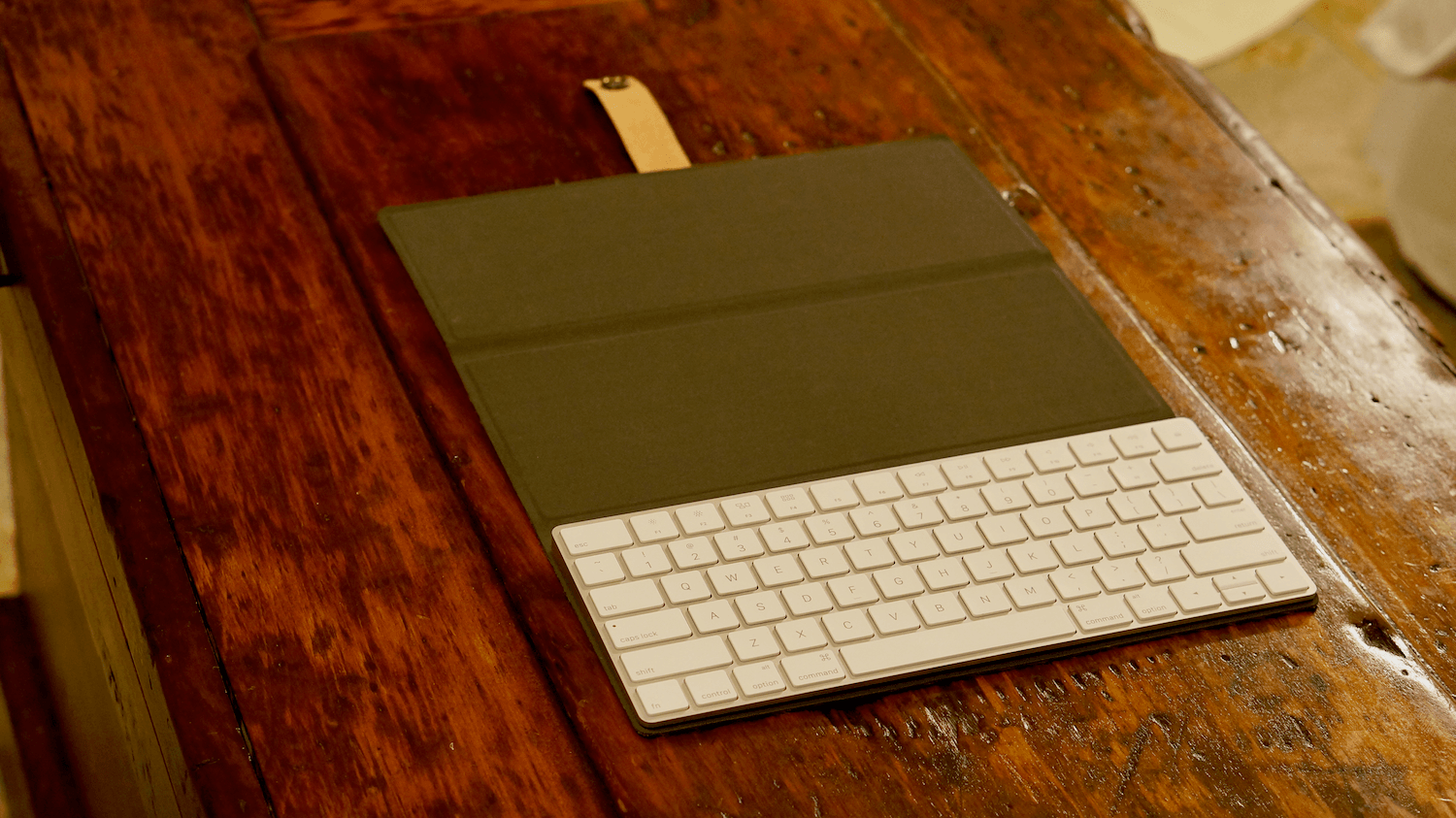 The Canopy features a three-panel design.

I’ve been using the Canopy with my iPad Pro, which fits nicely into the Canopy even with a Smart Cover attached, but any iOS device fits, including an iPhone. The snap used to secure the Canopy is strong and holds the configuration together well at a fixed angle that is a pleasure for writing.

An unexpected benefit of using the Magic Keyboard with my iPad that the Canopy has enabled is access to the function keys. iOS supports adjusting brightness and volume, controlling media playback, and showing and hiding the software keyboard with the Magic Keyboard’s top row of keys. It’s a small thing, but I especially like using the media playback keys with my iPad because use them frequently on my Macs. 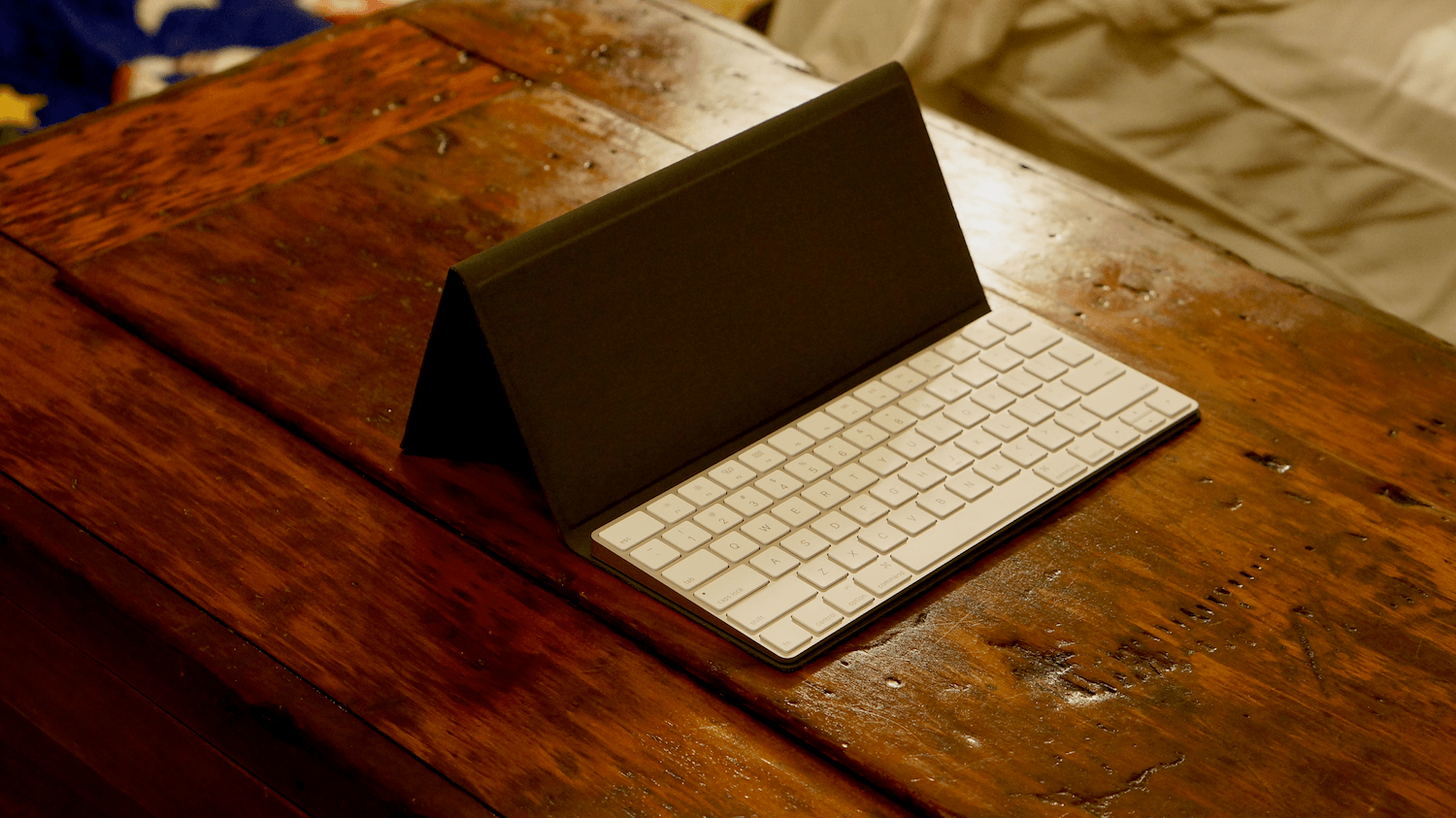 The leather strap and snap hold the top two-thirds of the Canopy together forming a stand.

I’m not picky about keyboards as long as they are comfortable. That said, I do prefer the feel of the Magic Keyboard to the Smart Keyboard. Before I started using the Canopy, I hadn’t considered using a Magic Keyboard with my iPad Pro, but the convenience and elegance of the Canopy has changed that.

After a week of heavy use, the Canopy has found a permanent place in my writing kit. I won’t use it every day – many days, the Smart Keyboard will be enough – but when I’m doing a lot of writing, I’m going to carry the Canopy. The typing experience is much closer to what you would find on a MacBook or MacBook Pro, which is sufficiently better than the Smart Keyboard that I bought a new Magic Keyboard to dedicate to the Canopy and my iPad. Students, writers, and anyone else who spends a lot of time typing into an iOS device should consider the Canopy.

The Canopy is available from Studio Neat’s website for $40.