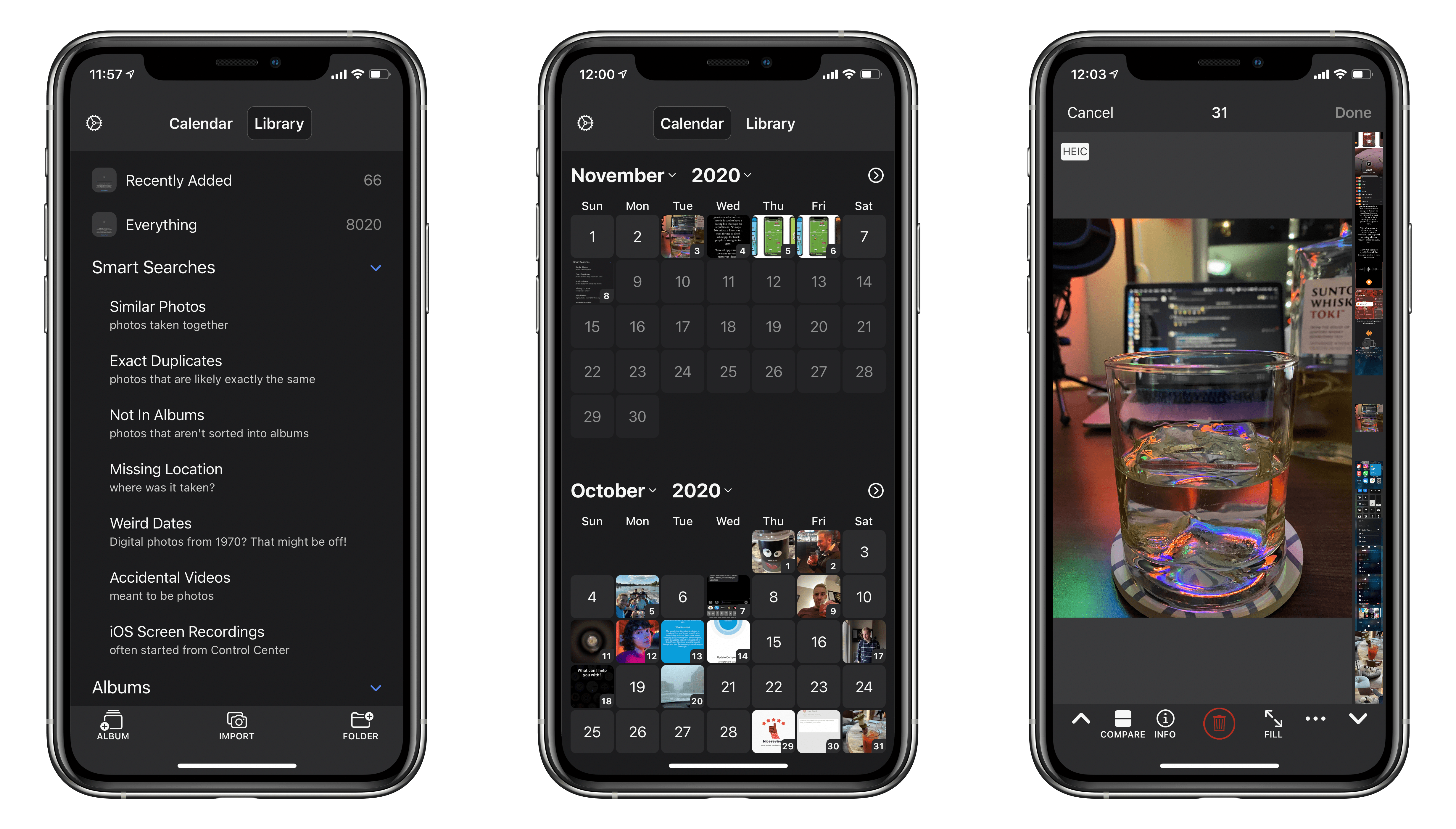 BestPhotos is a streamlined photo management app for iOS and iPadOS, which we last covered a couple years ago. The app seeks to help users clean up their photo libraries using smart searches, photo comparisons, and metadata edits. Today marks the release of BestPhotos 3.0, a major update in which developer Eric Welander has added a variety of useful new features and improvements. 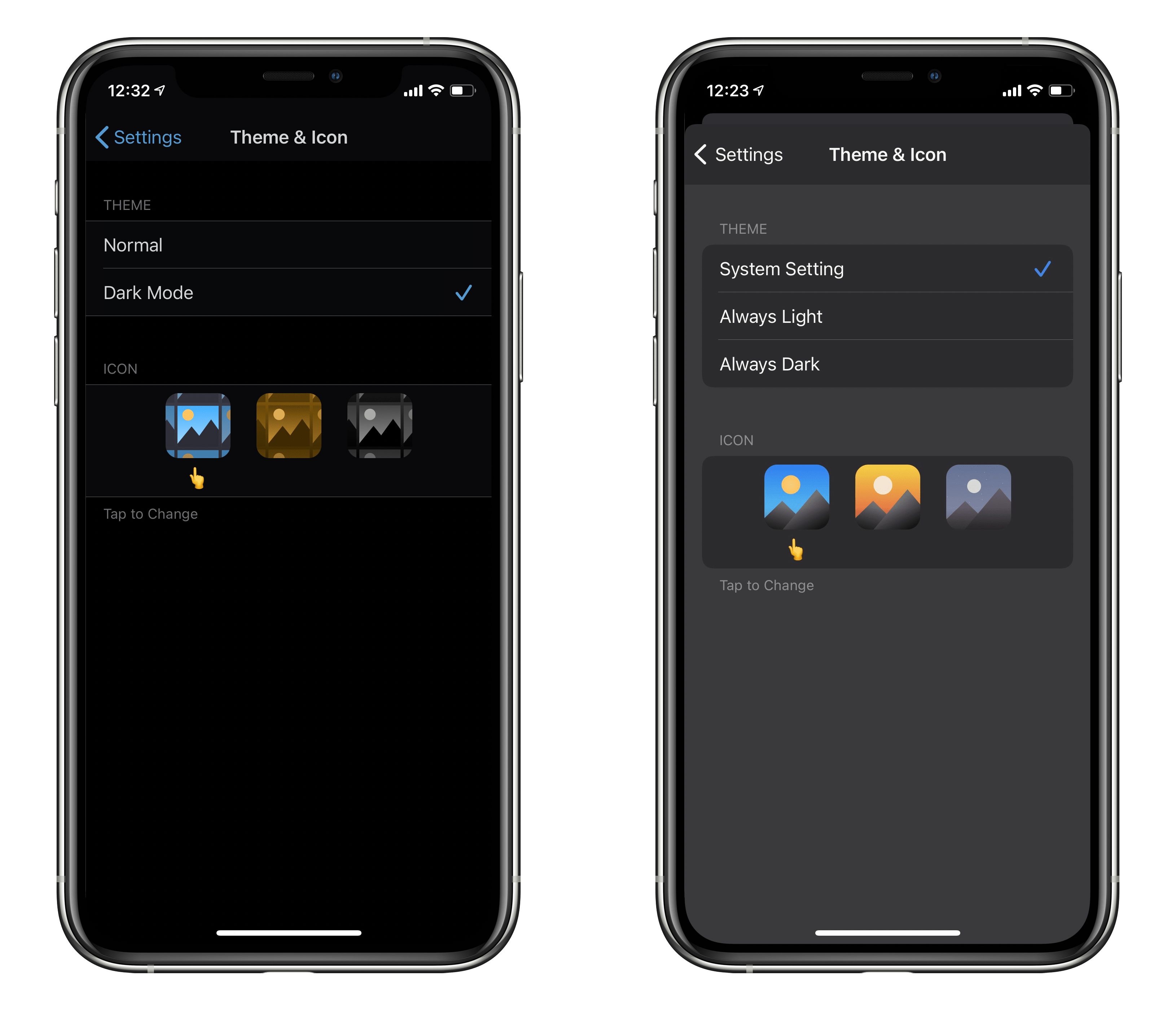 The first thing you’ll notice about BestPhotos 3 is the updated app icons. The previous version depicted a grid of photos, but the new one is zoomed in so that a single stylized photo of a mountain makes up the whole icon. The design is perfectly recognizable from its prior iteration but looks a lot more modern than the old one did. The icon is still available in three recognizable color options, but where the old icon showed its photo grid with a sepia or black-and-white filter over it, the new one feels more like an unfiltered photo taken at different times of the day. You can choose from daytime, twilight, or night versions of the icon. The new icons are gorgeous and a substantial improvement over their previous versions — especially the two alternate colors.

BestPhotos’ dark mode has been redesigned in version 3 as well. The old dark mode was mostly pitch black and had poor contrast between elements. The new dark mode is composed of a few shades of gray, and to my eye, looks much better. Throughout the app, there has been a subtle redesign of most elements, too — corners have been rounded and, spacing has been reconsidered. The result is a far more modern feel in most areas. 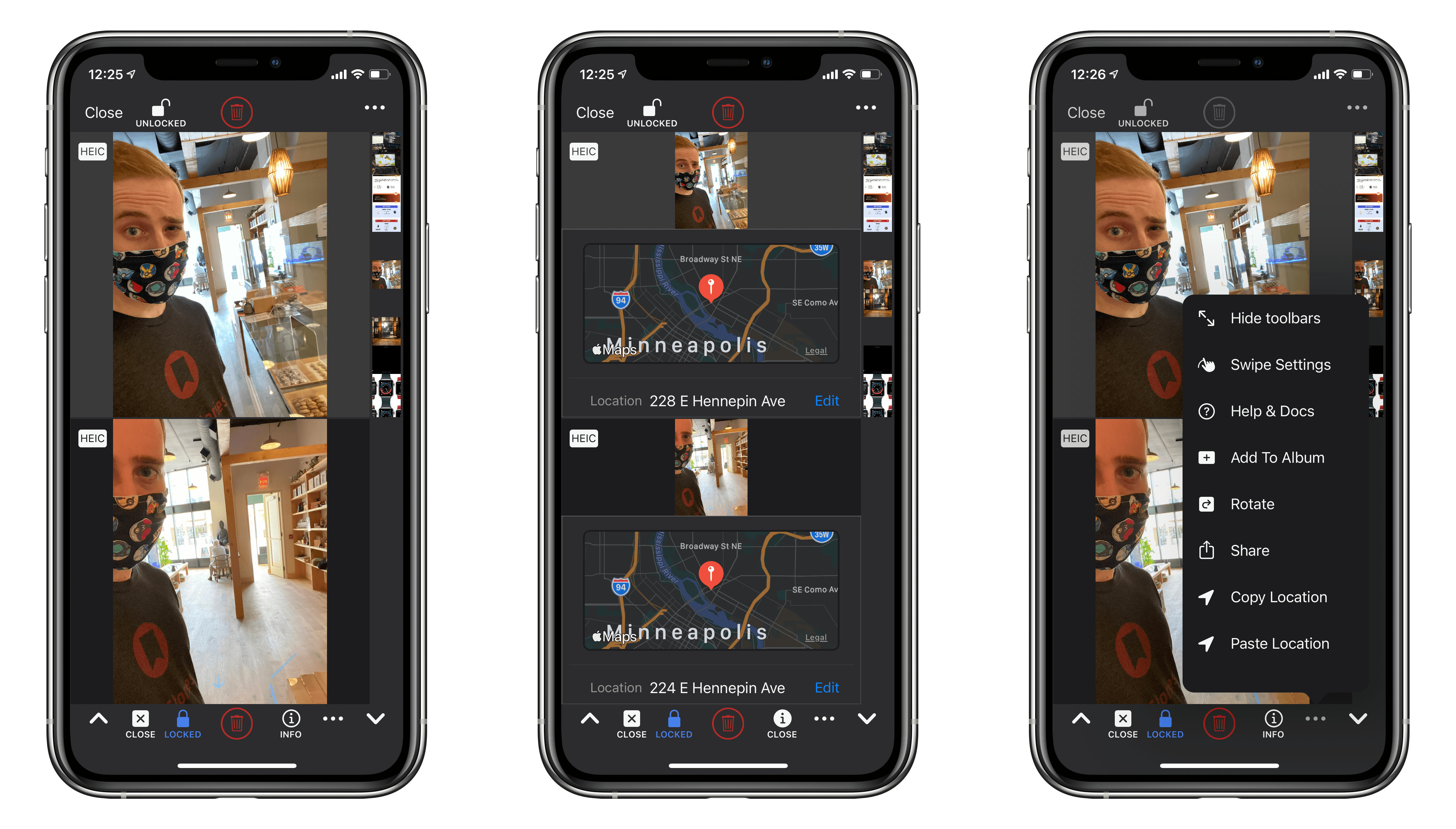 One of the core features of BestPhotos is comparing two different images, so you can choose which to keep and which to throw away. This is a difficult interface to get right, and we noted in our last review that the comparison UI wasn’t quite right. In BestPhotos 3, Welander has taken another shot at this interface, but I still find it similarly difficult to navigate at first.

The old comparison interface kept the top image locked in place at all times and allowed you to change the bottom image (on an iPad in landscape orientation, the lefthand image was locked while you could change the righthand image). To change the locked image, you would tap an icon to swap the two images and then continue from there. In the new interface, both images have a lock icon, one locked and one unlocked. Tapping either lock icon will toggle both locks to the alternate position and will move the scrolling thumbnail column to the side of the unlocked image. You can change the unlocked image by tapping the up arrow at the bottom-left corner or the down arrow at the bottom-right corner of the screen (or by tapping on a particular thumbnail in the column).

The new interface no longer requires you to position your base image on a particular side before checking various photos against it, which does make it a little more fluid to use since there are fewer taps to rearrange images. On the other hand, I find the shifting of the thumbnail column to be a bit jarring — perhaps adding an animation to the interface change might improve that feeling. Regardless, once I figured out how the new interface worked, it definitely improves my workflow for comparing similar photos and picking the best one. 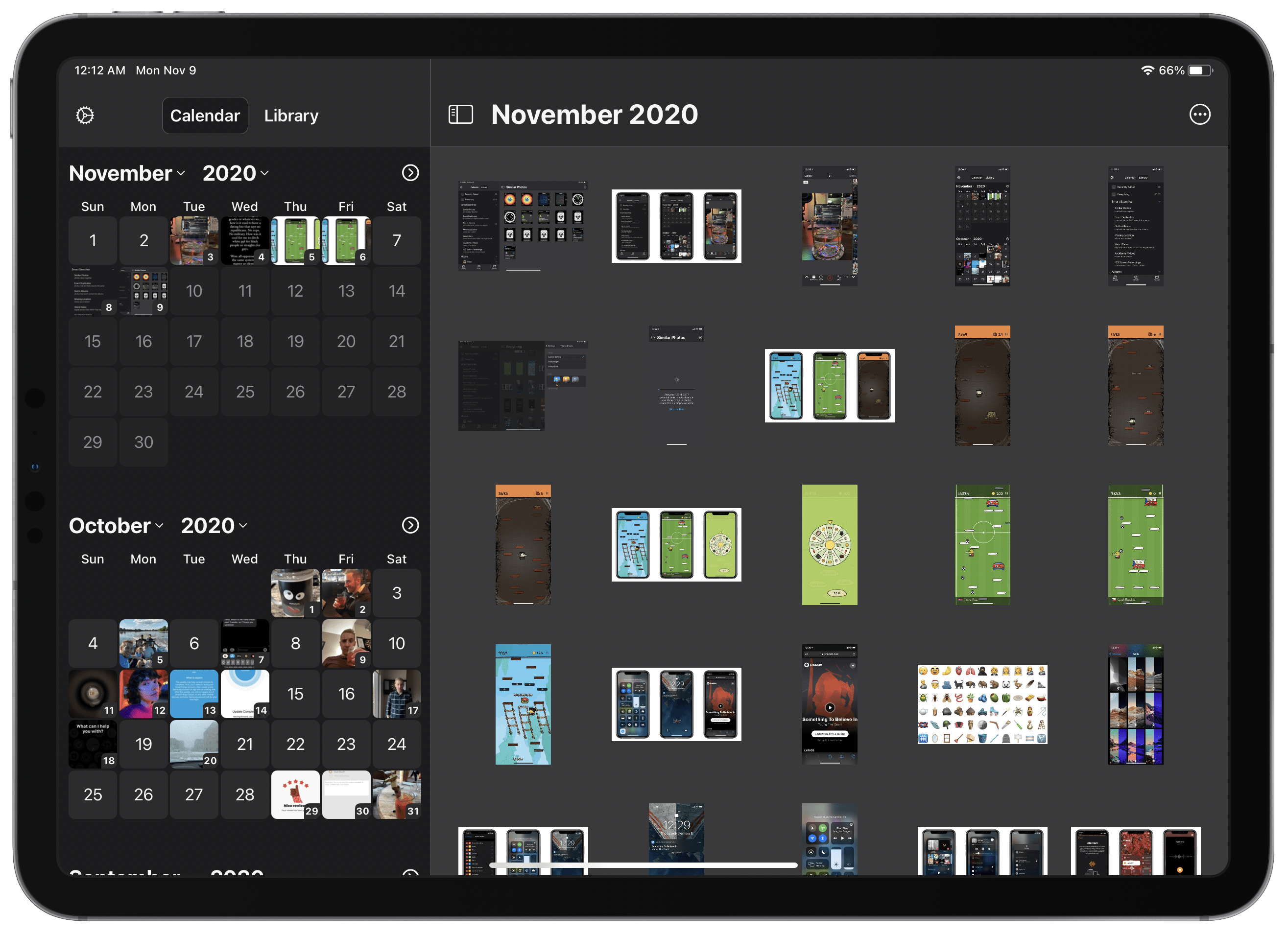 BestPhotos 3.0 features a brand new calendar view for navigating your photo library. The view consists of a scrolling list of months. Every day on which photos were taken shows a thumbnail of the last photo from that day. Tapping on a thumbnail opens a grid view of all photos taken on that day. You can also tap on the arrow at the top right of each month to open a grid view of all photos taken in that month.

I quite like the addition of this interface. I found it simply interesting to scroll through the past few years to see the clusters of days on which I’ve taken pictures and those that were dry patches without any pictures. Mostly, though, the new interface makes it easy to focus on honing all the photos that I took on a particular day. Usually, all the photos I’d want to compare are from the same burst periods anyway, so viewing only one day’s worth makes it easy to sort through and knock out a whole group without the clutter of unrelated photos from different days. 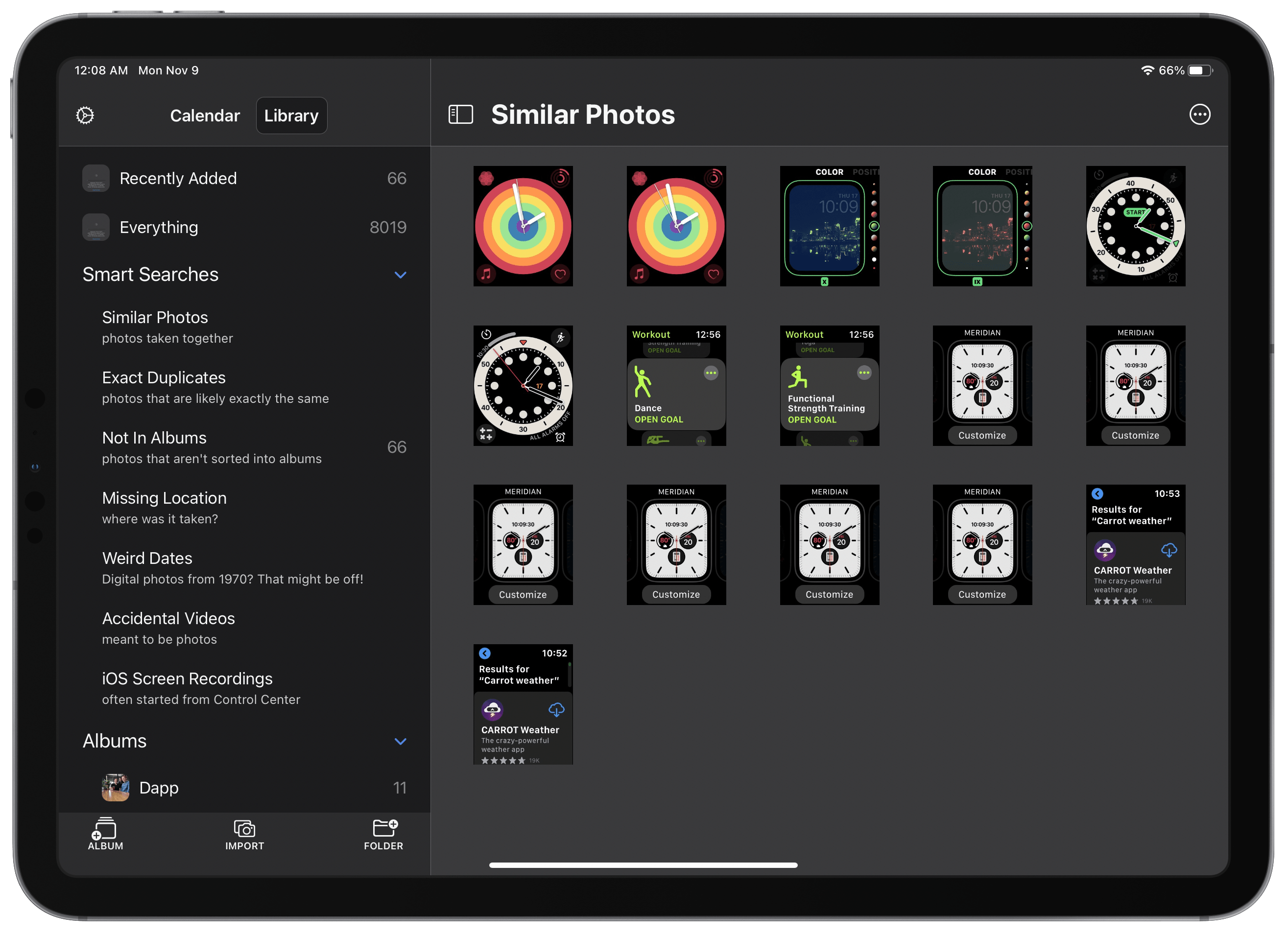 BestPhotos features a variety of smart search capabilities that you can access from the main Library view. My most-used smart search is the “Similar Photos” search, which scans my photo library and then shows me a grid of all groupings of photos that appear to be nearly identical. This makes it simple to start comparing batches of photos and identifying the best ones.

BestPhotos 3 adds a new “Weird Dates” smart search, which looks for photos whose date metadata say they were taken in 1970. In computer science, there’s a particular date in 1970 known as “epoch time,” which is the time that computers generally count from in order to set dates. It’s a whole thing which you can read more about elsewhere if you’re interested. Some older photo formats or import errors can result in photos being imported with a date set to epoch time zero. BestPhotos will identify these for you, so you can fix the date on them. 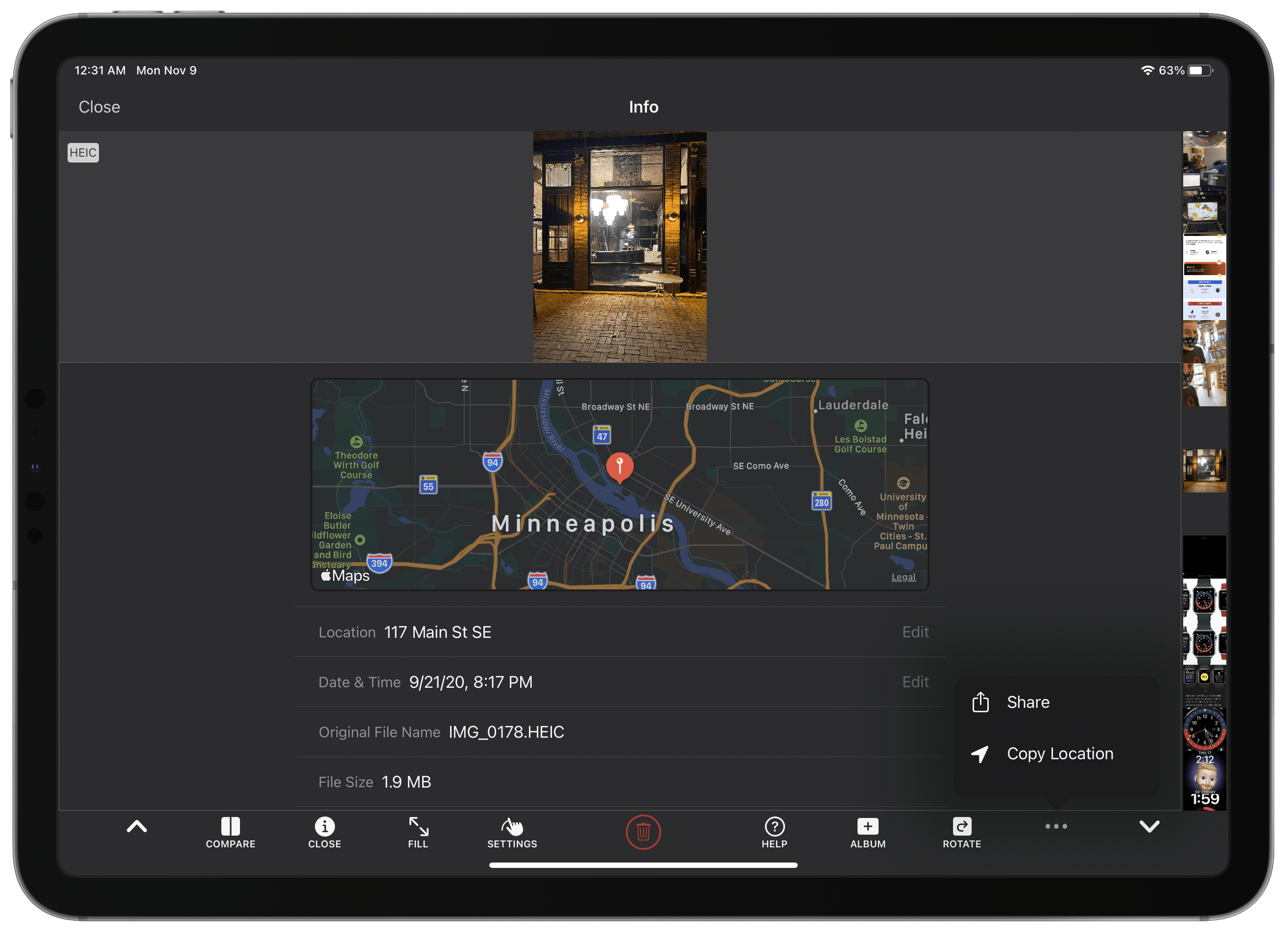 The new update also adds the ability to copy location metadata from photos and then paste it onto other ones. This is great if you have imported photos from an event using a data source that didn’t include the location metadata. If you take any other photos that do have the required metadata (or if you have any existing photos with the right location), you can now copy that metadata to the photos that are missing it. To perform this operation, open a photo with the location data that you want and tap the “…” icon. Tap “Copy Location,” then navigate to the photo to which you want to copy the location data. Tap the “…” icon again and then tap “Paste Location.”

If you don’t have an image from which to paste location metadata, you can also set it manually for an image. This is also new in BestPhotos 3.0, and you can access the functionality by opening a photo and tapping the “Info” icon, then tap “Edit” next to the location field. This opens a map view from which you can set a location manually. The info screen also now allows you to change a photo’s date and time.

If you want to batch-edit location or date and time metadata, you can do so from the batch selection interface described above. Once you have a batch of photos selected, tap the edit icon for the time or the location, and then save it for all selected photos.

Finally, BestPhotos 3.0 adds a new photo import tab. This is available from the top level of the app, and tapping the tab will automatically open the built-in file picker interface. From here, you can select a connected camera, SD card, or another external device from which to import photos. You can set a location, timezone, and album for all imported photos too.

BestPhotos 3.0 is a solid update to a useful app. I don’t think the interface is quite good enough to use this as my dedicated photo viewer, but I also don’t think that’s what this app is going for. BestPhotos is a utility built to speed up the process of comparing similar photos or (as of 3.0) batch-editing metadata. Seeing photos on the same screen while picking between them is a far better experience than my previous solution of quickly swiping back and forth in the Photos app.

BestPhotos is available for free on the App Store, with in-app purchases to unlock all of the app’s features. In version 3.0, the in-app purchase structure has been altered as well. You can unlock the app’s smart search functionality (which includes scanning for similar photos, photos not in albums, photos missing location metadata, and more) for $3.99, or all features (including smart searches, the compare view, metadata viewing and editing, icon and theme options, and the photo importer) for $7.99.

If you previously purchased the Best Features in-app purchase from an earlier version of the app, you can unlock the full features of the new version for a discount at only $3.99.

Alex has been writing for MacStories since 2013. As a MacStories editor he covers Apple and related technology on the site and for Club MacStories. Alex also keeps the site running smoothly and works on new technology as MacStories’ senior software engineer.