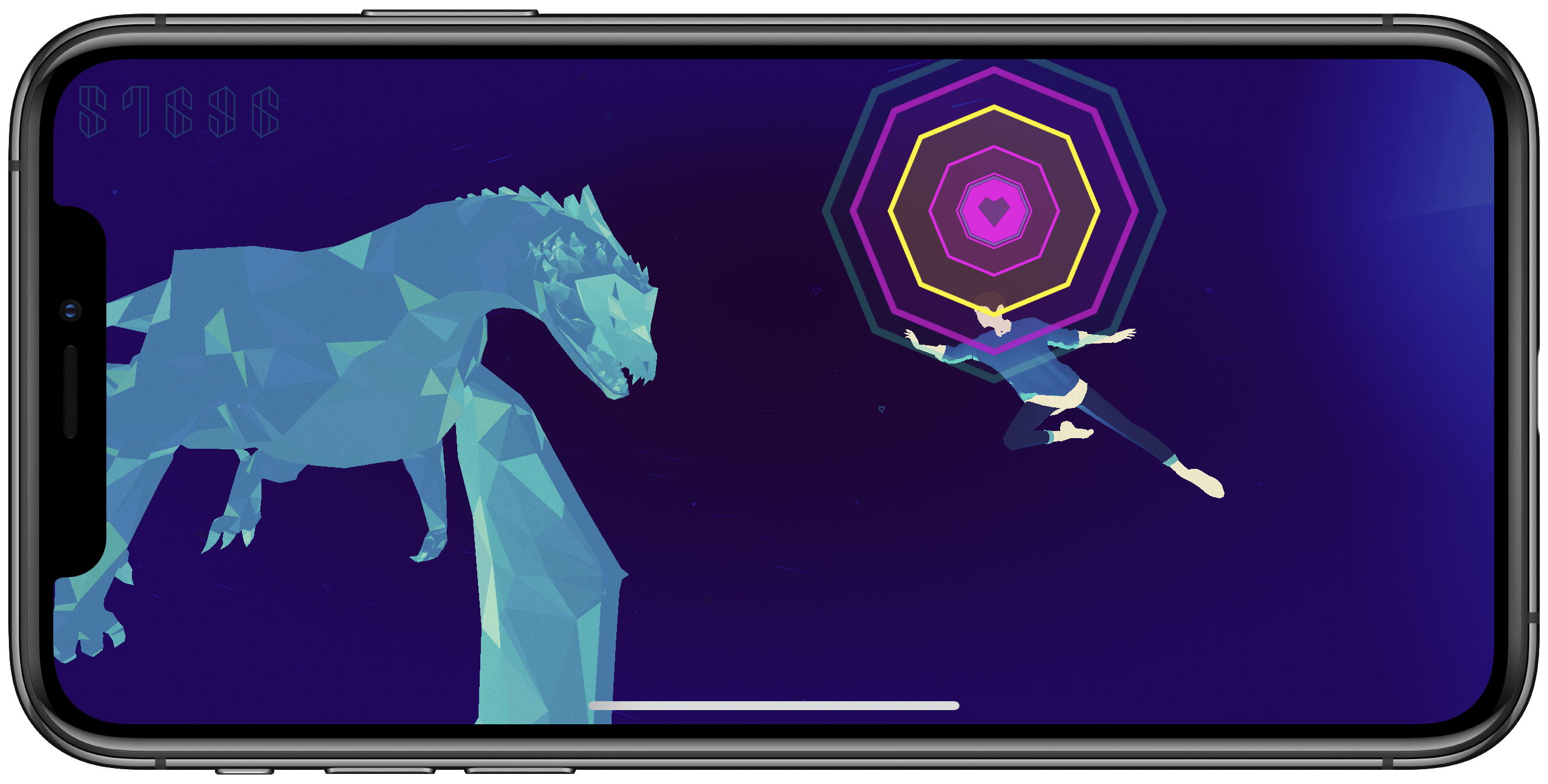 How can I best describe Sayonara Wild Hearts? It’s an on-rails music-driven game, but that feels like an inadequate description. Yes it’s a game, but combining the gameplay with Sayonara Wild Hearts’ blend of immersive levels, gorgeous visuals, and incredible soundtrack, it feels more fitting to call it an experience.

Sayonara Wild Hearts was an Apple Arcade launch title, one of the few demoed on-stage at Apple’s September event. And as one of Arcade’s premiere titles, it’s a brilliant representation of what Apple’s new service represents: off-the-walls originality. Arcade aims to fund and promote a variety of creative titles, freeing developers from the restraints commonly associated with the App Store’s In-App Purchase-dominated gaming fare. Sayonara Wild Hearts offers an experience that’s so unique and, dare I say, trippy, that it clearly represents its makers’ unfiltered vision. 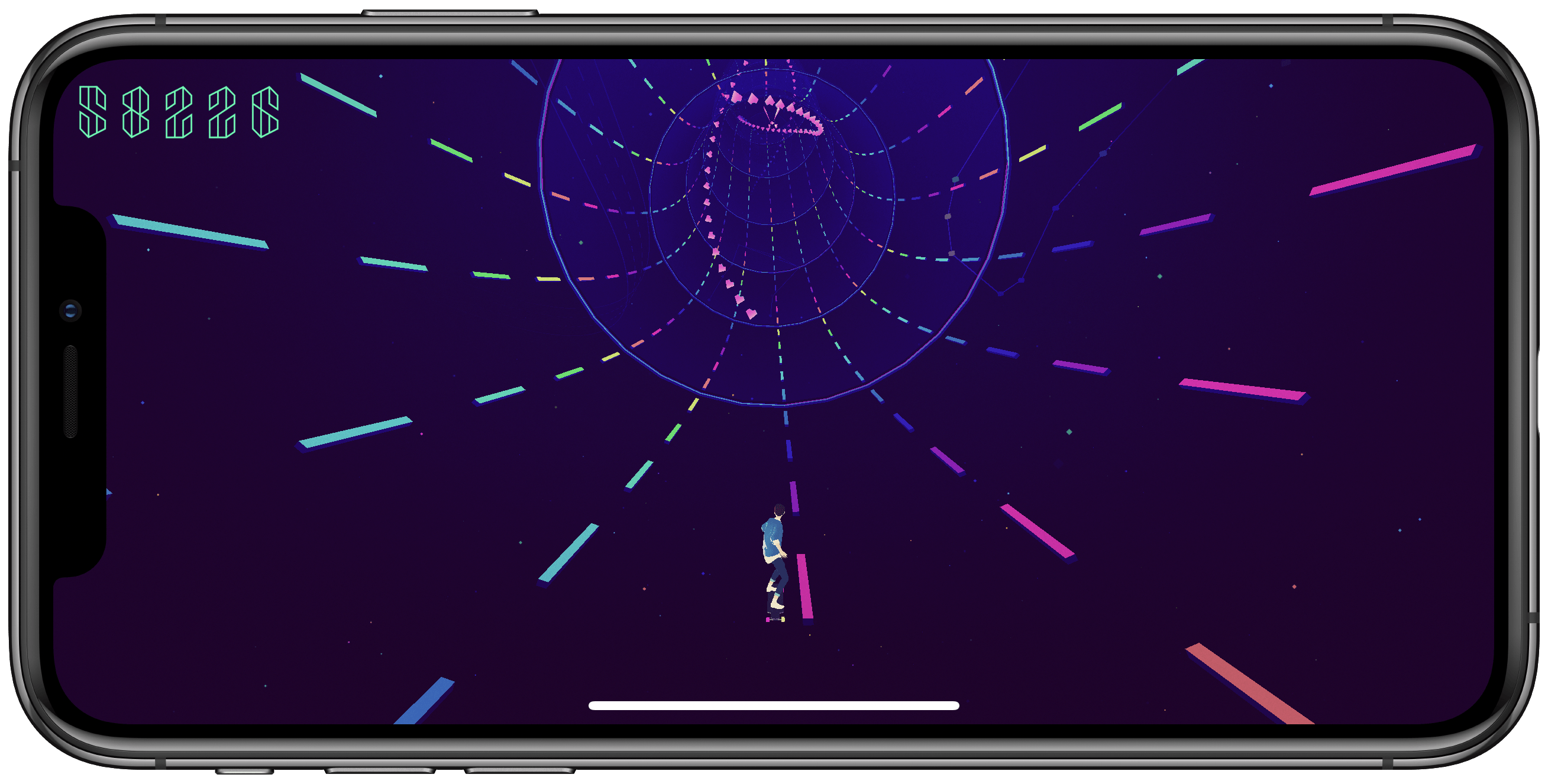 Stages consist of unique blends of light, color, and music.

Each stage involves riding a skateboard, motorcycle, or simply flying through the air as you try collecting as many hearts as possible to get the highest score, occasionally battling off foes with a sword or by shooting hearts at them. The game’s challenge isn’t so much about completing a level, but scoring well in it; gold, silver, and bronze rankings accompany your performance, and if you’re having a particularly hard time completing a portion of a stage, you’re offered the chance to skip ahead. Fortunately though, there are enough automatic save points that repeated failures don’t require much re-treading of lost ground.

Gameplay is relatively simple: your character is automatically propelled forward on-rails through the environment, and your task is to pan her around in space to pick up the aforementioned hearts, and avoid obstacles. It’s visually gorgeous, and each level involves a host of perspective shifts and delightful surprises. When I first started playing, the first couple stages were a little underwhelming because not much happened in them. Once you play more than a few minutes though, you start discovering the host of twists and turns that await you. Some stages, for example, eschew the game’s standard formula and instead focus on action sequences where you need to hit certain buttons in time with the music and on-screen events. Others take you all kinds of weird and wonderful places, like a sequence of levels where you’re trapped inside another character’s VR headset and move around in that interface. 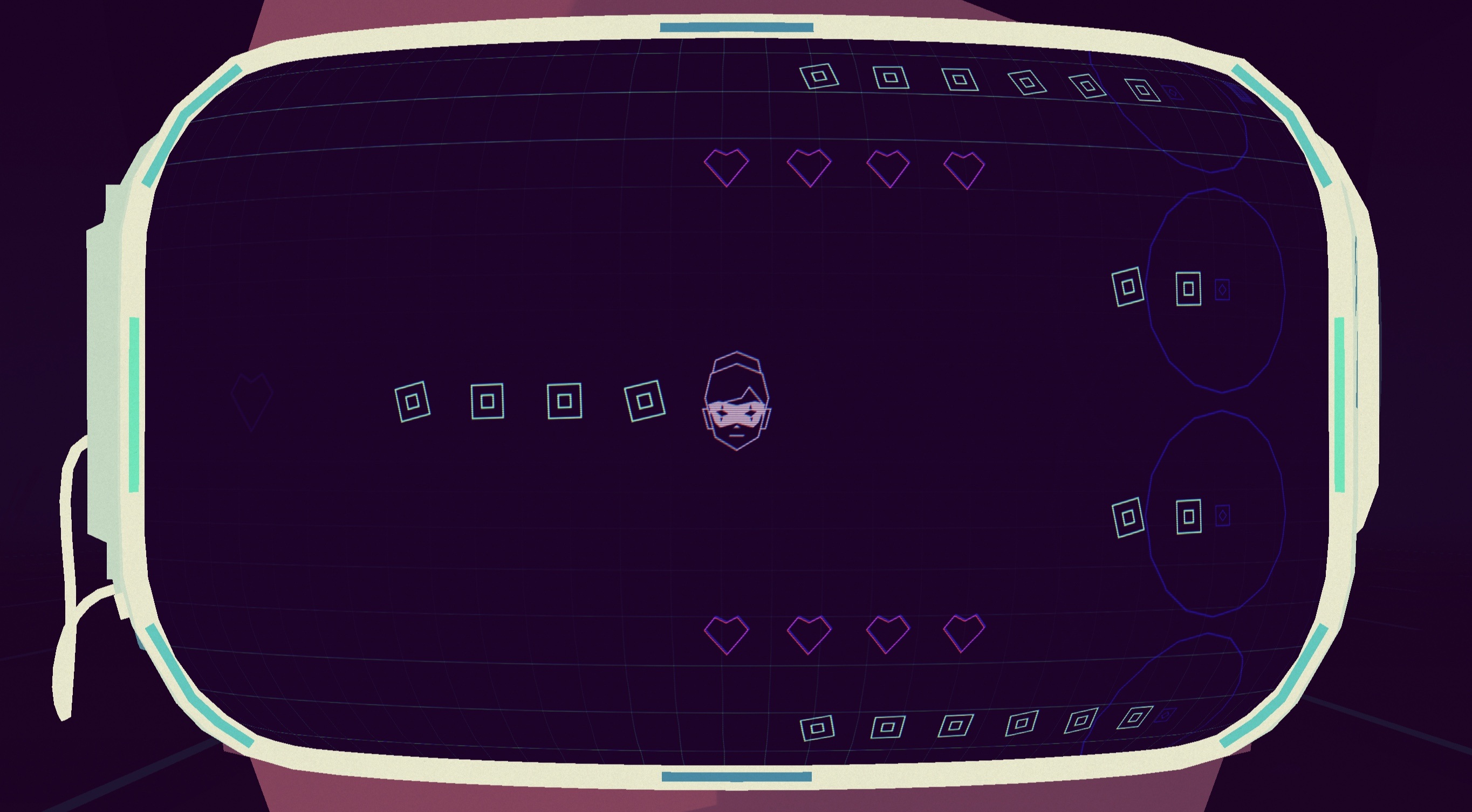 Playing inside a VR headset.

I’ll admit that Sayonara Wild Hearts’ frequent perspective shifts and flashy lighting effects were a bit physically unsettling at first, producing a low-grade headache as I tried to keep up. Fortunately, it wasn’t long before I adjusted and any sense of displacement went away. Hopefully this issue isn’t common among other players.

Once you’ve got the swing of things, Sayonara Wild Hearts is a thrilling ride. Its resonant soundtrack is a key part of the experience, setting the emotional tone for each stage and giving the game its soul. The stage design is another core part of the experience. You never know where each level might take you, and my only real complaint is that many of the levels are shorter than I’d like, ending right about the time they feel like they’re about to shift gears.

Tony Hawk’s got nothing on this.

Sayonara Wild Hearts is available across iPhone, iPad, Mac, and Apple TV, and crucially offers controller support. For most of my time with the game, I’ve used an Xbox One S controller and it’s been great; the touch controls are alright, but I think you’ll find they make it a lot harder to get high scores on each level. The times that I’ve used touch controls on my iPhone, I’ve preferred the game’s ‘High’ setting for Touch Sensitivity, which can be selected from the game’s Settings.

Apple Arcade launched with an overwhelming number of excellent games, and for the last several weeks Apple has added four of five new titles every Friday, making it all the more important to find the best of the best from Arcade’s catalog. I think Sayonara Wild Hearts is one of those gems. From start to finish it surprises and delights, offering an immersive thrill ride set to a terrific soundtrack. I’m sure it won’t be for everyone, but if you’re an Arcade subscriber, you at least owe it to yourself to give it a try.