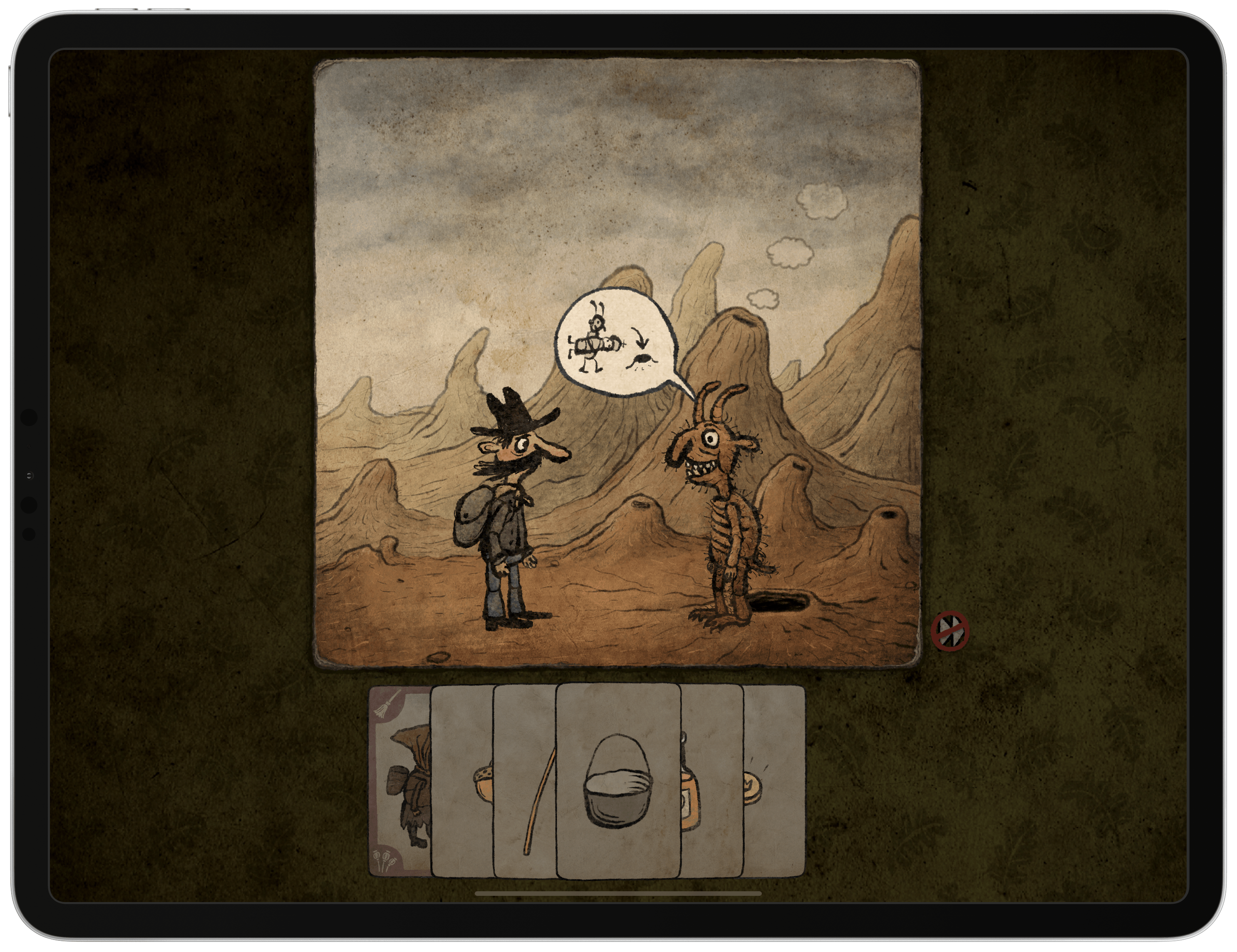 Apple Arcade launched with a flurry of fantastic games. Not long after the first wave of titles hit the service, Czech studio Amanita Design turned heads with the unexpected release of Pilgrims, a traditional adventure game that borrows interaction elements from card-based games. The studio’s quirky, signature art style and sound design come together in a short but delightful game that encourages exploration and experimentation.

Amanita has been making iOS games since the earliest days of the App Store. It’s probably best known for Machinarium, which was released in 2009, but it has released a string of artful games that are fan favorites, including CHUCHEL, Samorost 3, and Botanicula.

Pilgrims dropped on Apple Arcade in October and is available on iOS, iPadOS, tvOS, and the Mac. I’ve played the game on all four platforms and found that it’s best experienced on the iPad, followed closely by the Mac.

The reasons Pilgrims succeeds so well on the iPad are threefold. First, the game is beautifully illustrated in a hand-drawn style that is reminiscent of a children’s storybook, which a big Retina iPad screen helps bring to life. Second, the iPad’s superior sound system makes it a great way to enjoy the game’s soundtrack, even without headphones. Finally, as I’ll explain in more detail below, Pilgrims relies on a card-based approach to gameplay that lends itself to touch, making direct interaction with the game’s cards and collectibles a natural fit.

The iPhone benefits from the same intimate interaction as the iPad, but the experience is diminished by the smaller screen and the iPhone’s inferior speakers when played without headphones. Pilgrims benefits from the even bigger screens of a Mac and TV, where I found that interacting with the game with a trackpad or mouse felt closer to the iPad’s touch experience than using the Apple TV’s Siri Remote or a game controller.

The premise of Pilgrims is simple: you start the game as a traveler who wakes up in his tent. You navigate around a map to various locations by tapping or clicking on them. Along the way, you collect items, interact with other characters, and solve puzzles. As you pass certain milestones, you’re joined by other pilgrims on your travels as you progress to the conclusion of the story.

The characters you befriend and the items you collect are represented by cards at the bottom of the screen. As you travel from point to point, your objectives will be clear: the thief wants potatoes, and the restaurant owner wants wine, for example. To obtain those items and unlock later stages of the game, you need to visit other locations on the map and through trial and error, collect items, trade for others, and interact with characters to advance the story. 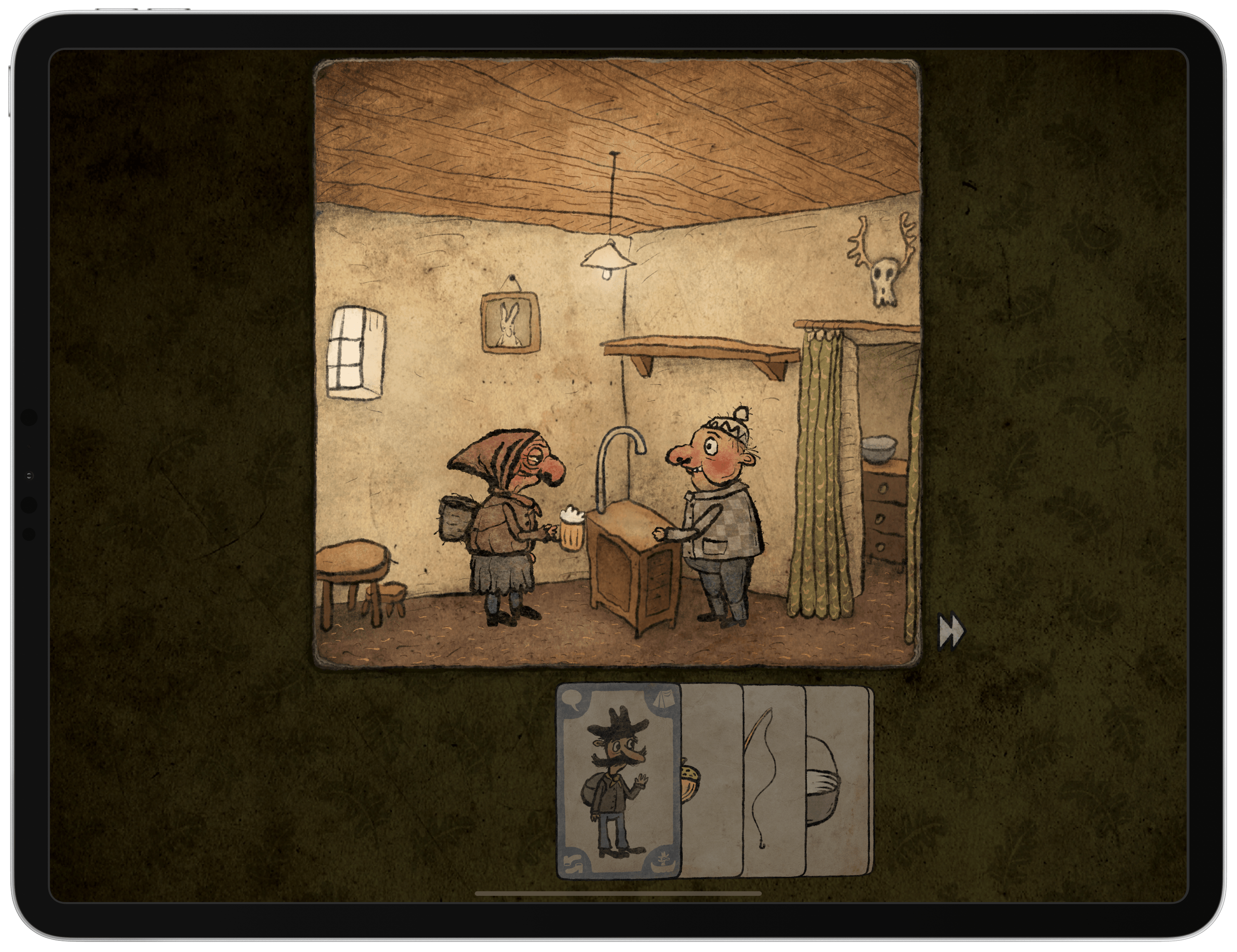 Interactions in Pilgrims are primarily accomplished by dragging the cards of items you’ve collected and travelers you’ve befriended into each scene.

Interactions are initiated by dragging cards into each scene and then watching how the story unfolds. The scenes are handled with an excellent sense of humor and whimsy that encourages you to experiment. In turn, that lends itself to a leisurely pace and provides a richer experience than doing the minimum necessary to reach the end of the game would suggest. It also makes Pilgrims a fun game to revisit because, although the environment may be familiar, testing different interactions with the characters you meet along the way makes repeat plays fun.

It’s the combination of storytelling and card-based play that makes Pilgrims such a perfect match with the iPad. Playing on a big Mac screen with a good set of speakers is a close second, but sitting back in a comfortable chair and exploring Pilgrims’ world from an iPad can’t be beaten. If you missed this release, which trailed the Apple Arcade launch by a few weeks, be sure to check it out now.

Pilgrims is available as part of Apple Arcade on iPhone, iPad, Apple TV, and Mac.