App Journal is a new series aimed at showcasing apps we have enjoyed using on our iPhones, iPads, and Macs, but decided not to feature in a standalone, lengthy review here on MacStories. App Journal is a mix of classic reviews, weekly app recommendations, and a diary of our experiences with apps that still deserve a proper mention.

After the release of iOS 5, iCloud and the first wave of new apps that take advantage of Apple’s new OS and sync services, the App Store is quickly marching towards a holiday season that will be huge, both for hardware sales as well as app and game releases, software deals, and new retail features at Apple’s physical stores. While we wait for the craziness to begin later this month, we take a look at a cool music visualizer for the iPad, a finance app for the iPhone, a Campfire client and a utility to update your status on multiple social networks at once.

Sounds cool? Follow us for this week’s app collection after the break, and stay tuned for more App Journals in the next weeks. 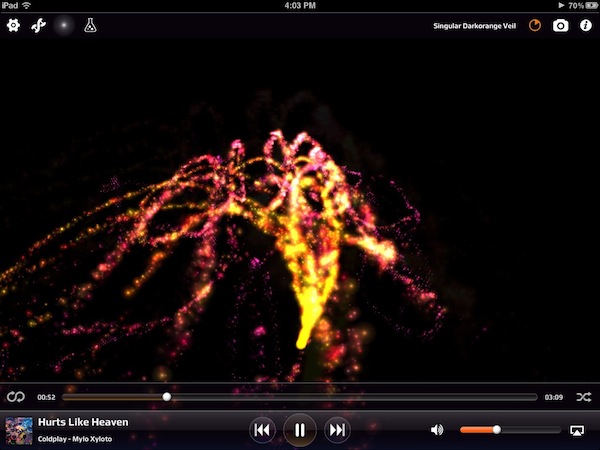 I found out about Muon when I first saw an ad in our site’s sidebar. I don’t manage advertising on MacStories anymore, so the encounter was completely random, and the fact that the developers are advertising on our site didn’t influence my decision to mention their iPad app on the Journal. Just making things clear.

That said, Muon is a nice music visualizer for the iPad, kind of like iTunes’ own visualizer but with more effects and touch controls. The app can fetch songs from your existing Music library, and displays AirPlay-compatible controls as a translucent bar at the bottom. You can tap on a song’s name at any time to change artist or album or pick a playlist, but I don’t like the blue design of the music picker menu. Visual effects are obviously Muon’s main feature, and interestingly enough the app comes with settings to control the Audio, Drag and Mutate reactions of the Visualizer. You can tweak things like Orbital Speed, Life Span, Color Entropy and Zoom & Blur, and you’ll notice that modifying these parameters really changes what’s displayed on screen.

The developers claim Muon can move up to 500,000 particles on the iPad 2, with a complex visualization engine that makes effects evolve with the beat of you music and gradually form different shapes and patterns that you can capture as presets, or screenshots with the dedicated camera button. The app supports video-out and AirPlay Mirroring, as well as dual monitor setups and full-screen view on the iPad.

Overall, Muon comes with some fairly advanced control options but I simply prefer to keep it running and let it decide which effects to use according to the song that’s playing. Muon is $0.99 on the App Store for a limited time. 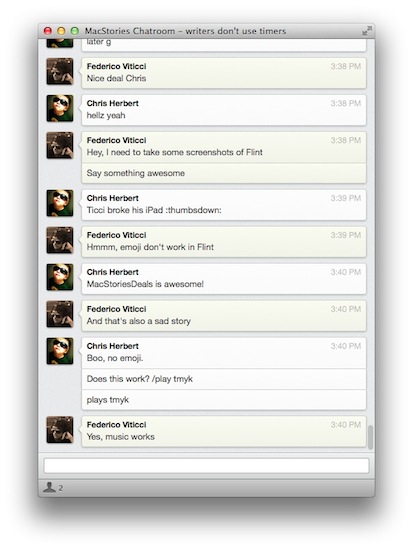 For our communication needs here at MacStories, we use 37signals’ Campfire. For those who are not familiar with the service, it’s a fantastic chat tool for teams that, among other things, allows you to upload files, manage chat transcripts for multiple rooms, and visualize media such as pictures and videos with inline previews. We use Campfire every day to quickly put out news, casually hang out, and assign articles to each other. There’s no doubt Campfire has become an essential tool for getting things done over here.

In the past months I’ve been testing Flint, a native Mac client for Campfire that’s available on the Mac App Store. It’s been hard for me to switch from the browser-based, pinned tab for Campfire, but Flint is simply fantastic. The interface is elegant, gets out of the way and nicely highlights conversations in a Campfire room. There are profile pictures for users, and a popover at the bottom lets you see all participants in a conversation. The app supports most of Campfire’s web functionalities (image previews, sounds, but no emoji), and more importantly it’s perfectly integrated with Growl on OS X. 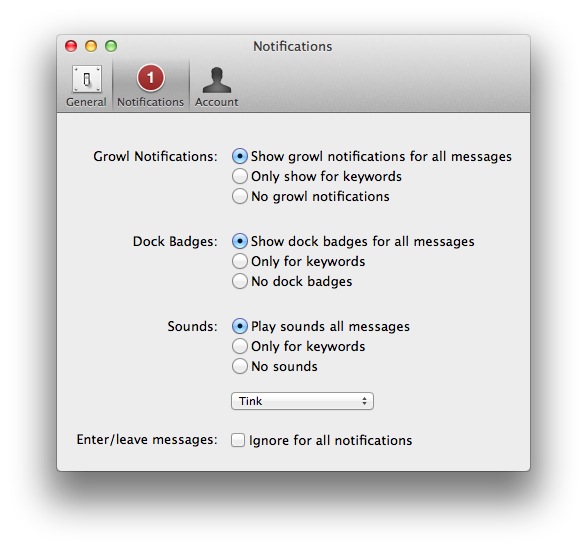 This is the main reason I use Flint – with Growl integration, I can take a look at what’s being said without opening the app and, from the Preferences, control the behavior of sounds, dock badges, keywords and enter/leave messages. In the past weeks, the developers have also released an update that improves the reliability and speed of the app from the first version – so if you gave it a try initially and went back to Campfire on the web, now it’s time to fire up the app again and see if things have improved for you.

I, for one, will keep using Flint to catch up with my team and get work done. If you’re serious about Campfire and have a Mac, Flint is $9.99 on the App Store. 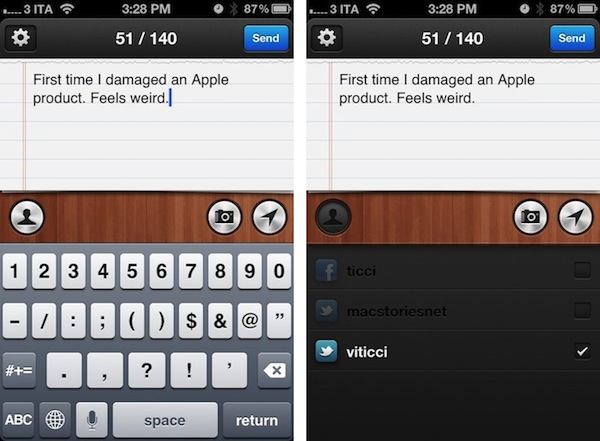 I first reviewed Sociable for iPhone earlier this year, and version 1.0 was a simple utility to update your status on multiple social networks at once – the app supported Twitter, Facebook, LinkedIn and MySpace with regular text-based updates. With version 2.o, the developers have added a lot more functionality to the app, allowing multiple accounts of the same type (you can add as many Twitter accounts as you want), photo uploads, geo-tagged tweets and Tumblr integration. MySpace is gone, but no one was using that anyway. To make things even better, the interface has been tweaked a bit and it now sports iCloud-like brush metal buttons. Unfortunately, the app doesn’t come with iOS 5 Twitter integration for easily adding accounts.

If you want to update multiple social networks at once, Sociable is very easy to use and looks nice. $0.99 on the App Store.

A few months ago I reviewed Saver, an iPhone app that helps to keep track of your expenses. I raved about its beautiful design and ease of use whilst still being a powerful tool. A few weeks ago, the developers of a similar expense tracking app got in touch with us and asked if we would like to give their app a spin after we liked Saver so much. So for the past week or so I have been giving their app, CoinKeeper, a spin and I must say I like it quite a bit. 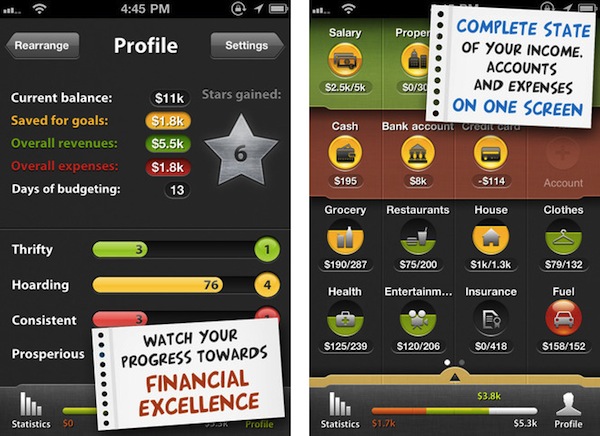 CoinKeeper works differently to Saver and initially I found it a little confusing in how everything is organised into four “trays”. The top green tray is for income (e.g. your salary or wage), the red tray for your various accounts (e.g. debit card, cash, etc.), the grey tray for your expenses (e.g. groceries, transport, etc.) and the bottom gold tray for your goals. The way you track an expense is by dragging one of your accounts over to one of the expense ‘circles’ and then entering in a value. Likewise you can transfer money across accounts and from your income by dragging the respective circles — whilst it is a clever system (and in some ways quicker than Saver) it isn’t intuitive right away.

One of the coolest features of CoinKeeper for me was how it implements budgeting. When you initially launch the app you are asked if you want to manually create budgets or if you would like it to be automatically done. If you choose automatically, you just need to enter an average income figure and all of your expenses are automatically given an appropriate proportion of that figure - but it’s done cleverly so that groceries will get a greater proportion than clothes. Plus, you can always change this budgeted figure to suit your lifestyle by tapping the expense and changing the figure located at the bottom of that screen. But the best bit of this budgeting is that as you begin to spend money on your various expenses, the little circle will begin to fill up like a meter. Initially it is green but as you spend more and more, it fills up and begins to go yellow before it goes red when you spend over your allocated budget.

CoinKeeper also differentiates itself with its interesting achievement system. Unfortunately I didn’t dive too much into this achievement system (mostly because it takes a while to get these achievements), but from the profile page of the app, you are ‘rewarded’ on a few points of criteria: thriftiness, hoarding, consistent, prosperous and you also achieve stars. It’s a curious and intriguing system that brings a bit of fun to the typically mundane task of tracking your expenses and budgeting.

Ultimately I still personally prefer Saver, but CoinKeeper is still a top-notch app and will be a good choice for many - particularly those who might appreciate the element of gaming in the app and the clever design of the app’s main screen with its various trays and circles.

CoinKeeper is available for the iPhone for $2.99.