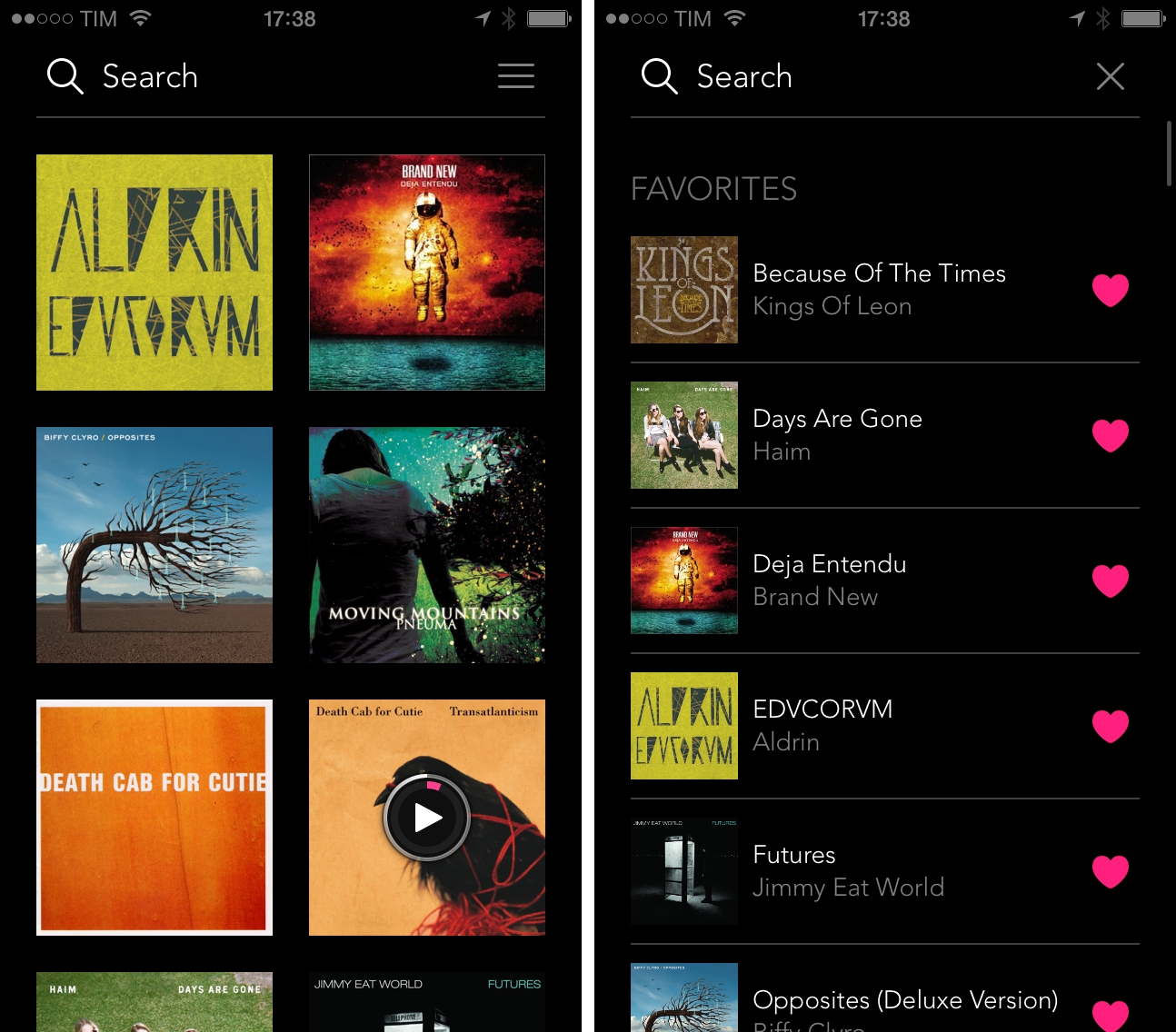 In the increasing complexity of music streaming apps that put several layers of interface and navigation between the launch experience and listening to your favorite songs, Albums is a refreshingly simple music player that lets you search, bookmark, and play your favorite albums. Developed by Louie Mantia and Caleb Thorson, I was skeptical about the app’s premise when I saw its one screenshot and read its iTunes description, but there is something about it that resonates with me and that has been elegantly executed in this first release.

I grew up asking my parents to buy me albums of my favorite artists. My most vivid memories for bands that I was into when growing up – Oasis, Smashing Pumpkins, Led Zeppelin, Blur, just to name a few – aren’t limited to the contents of an album itself – they’re about the songs as much as they’re about the circumstance of buying an album, owning it, consuming it, and putting it into a CD player. I distinctly remember buying Mellon Collie and the Infinite Sadness at a record store in Terni and poring over its booklet and artwork; I remember when I lost my copy of (What’s The Story) Morning Glory? and getting a new one because I needed that CD back in my collection.

Today, I suppose that new generations mostly don’t care about albums as the physicality of owning a CD (or cassette tape, or vinyl) has been lost in the transition to digital downloads and streaming, but, more importantly, because software features like shuffle, search, and playlists have made it easier to hand-pick the best songs from albums and listen to individual tracks without having to skip through filler.

I’m part of the “problem” too: most of my time in music streaming apps is spent browsing and searching, changing songs more frequently than I used to because it’s easy, convenient, and I can listen to anything I want with a few taps. Modern music apps that deal with large collections, search, streaming, or radio features are generally built with a focus on showcasing how much content is available instead of what’s your favorite content. And I could argue that it’s not wrong – it’s great, if done well – it’s just different, and I sometimes miss The Way It Used To Be™. I am an iTunes Match subscriber and I keep a few albums in my library – stuff like Transatlanticism, Deja Entendu, Pneuma, and The Photo Album. I know I want to listen to these albums in their entirety, but the browsing experience in Apple’s Music app is subpar and it’s not getting any better with iOS 8. Third-party replacements work, but they have limitations and aren’t optimized for the simple “I just want to get to my favorite albums fast” scenario.

Albums is disarmingly simple and built exactly for this purpose. When you start the app, you’re presented with a Search screen that displays all your albums in your local Music library. Tap an album to start playing, or tap the heart icon to make it a favorite. When an album is playing, a play/pause control is overlaid on its artwork, and the app supports streaming from iTunes Match (provided that “Show All Music” is enabled in iOS’ Settings). There’s no UI to open albums and pick songs, no filters, no playlists – you just choose albums and play them. You can open Control Center and navigate through songs from there (under the hood, Albums uses Apple’s Music app for playback), but UI conventions and metaphors that you’d typically find in other music players are nowhere to be found in Albums.

With favorites saved, the app’s main screen is a modern take on what my desk used to look like ten years ago. Six or seven albums in my “heavy rotation” list, only I don’t need to put CDs into a Panasonic player because I can just tap to start playing an album I love. Whether it’s the way Ben Gibbard takes you from the epic ending to Transatlanticism to the gentle opening of Passenger Seat or how Jimmy Eat World’s Futures ends with 23, Albums doesn’t want to show you social sharing buttons, numerical indicators, Up Next settings, or other interface cruft. There are several ways in which Albums could be “better” – choosing your favorite albums from Rdio or Spotify, for instance – but there’s also a balance between searching your library and having fast and immediate access to favorites that I don’t want to see lost in future updates.

Albums is an app made for people who still love listening to albums as their creators intended. Music streaming services don’t quite cut it when it comes to quickly accessing albums you’re into right now, and even if I won’t open Albums several times each day, it’s good to know that I can easily spend a couple of hours with Death Cab for Cutie or Oasis with a dedicated app that doesn’t need me to learn anything else. I’m glad that Louie and Caleb made Albums, and I’m glad they made it like this.