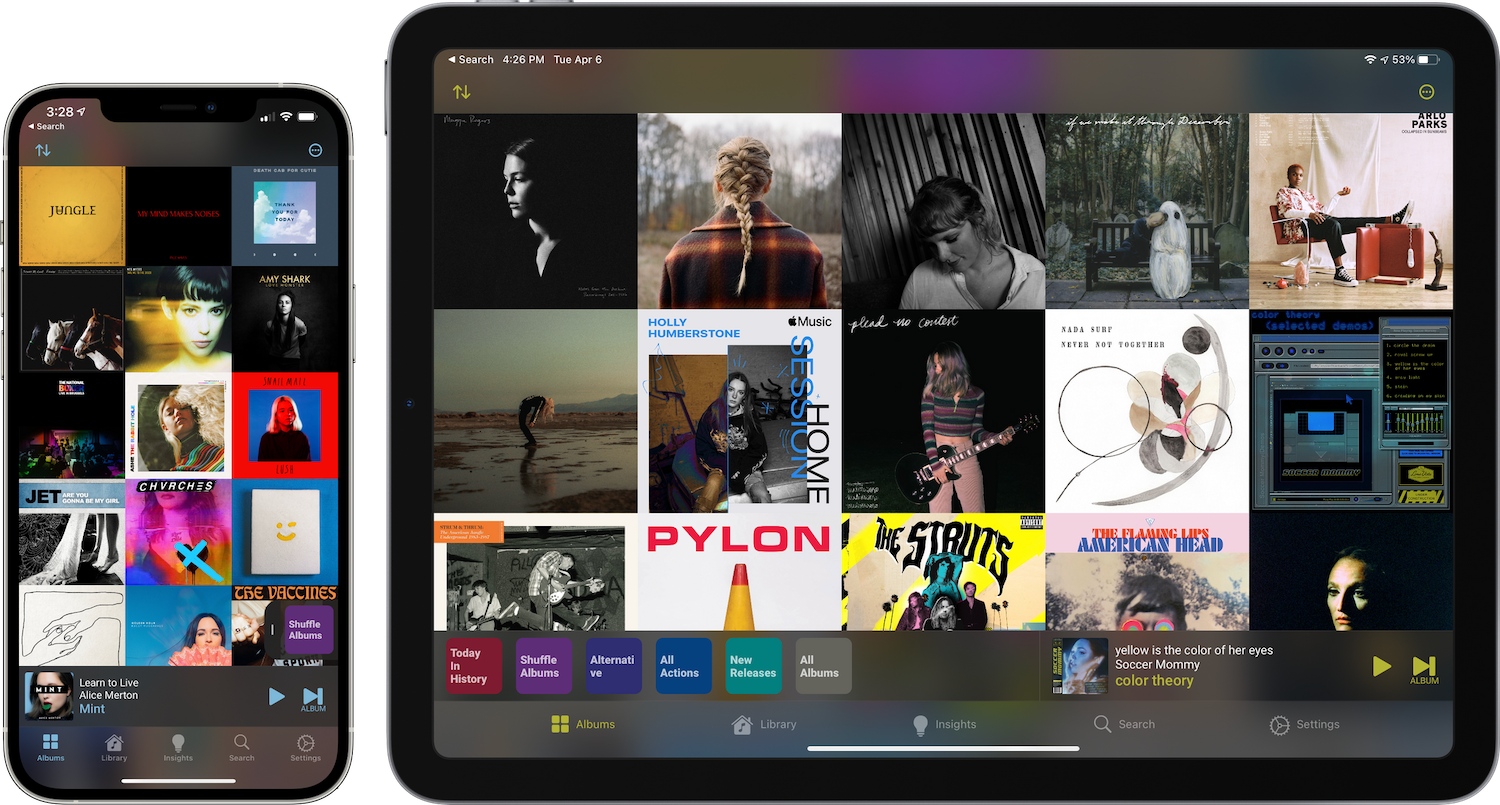 Albums 4.0 is a beautifully designed, feature-rich app with more filtering and discovery tools than any other music app I’ve tried. The app is also opinionated, favoring album playback over individual songs or playlists. It’s the sort of focused, deep approach to music that Apple’s Music app doesn’t offer because it’s designed to appeal to a wider audience.

If you’re an albums-first music fan, you’ll love Albums. However, even if you prefer singles, playlists, and jumping around the Apple Music catalog as I do, Albums is worth checking out. The app’s powerful filtering opens up brand new ways to enjoy your music collection that any music fan can appreciate.

It just so happens that Federico and I are in the midst of an AppStories miniseries on music. This week we discussed how we listen to music and how it influences the services we use. Next week, we’ll cover third-party apps including Albums and many more. You can check out this week’s episode here:

Albums, which is available on the iPhone and iPad, divides its features across five tabs on both platforms. The first default view is Albums. When you first open the app, you’re greeted with a grid of album art, a toolbar at the top of the screen, and playback controls just above the tab bar. Tap on any album in this view, and it immediately starts playing the first track. If you prefer, you can switch the look of the Albums view to a detail view that includes additional information or a list view. The information included in the detail and list view is user-definable, too, part of a customization theme that permeates all aspects of Albums. I like the album art view the best for browsing my collection, but I also appreciate the options available with the other views. My only gripe is that the three-dot button in Albums’ toolbar is small and sometimes requires multiple attempts to tap. 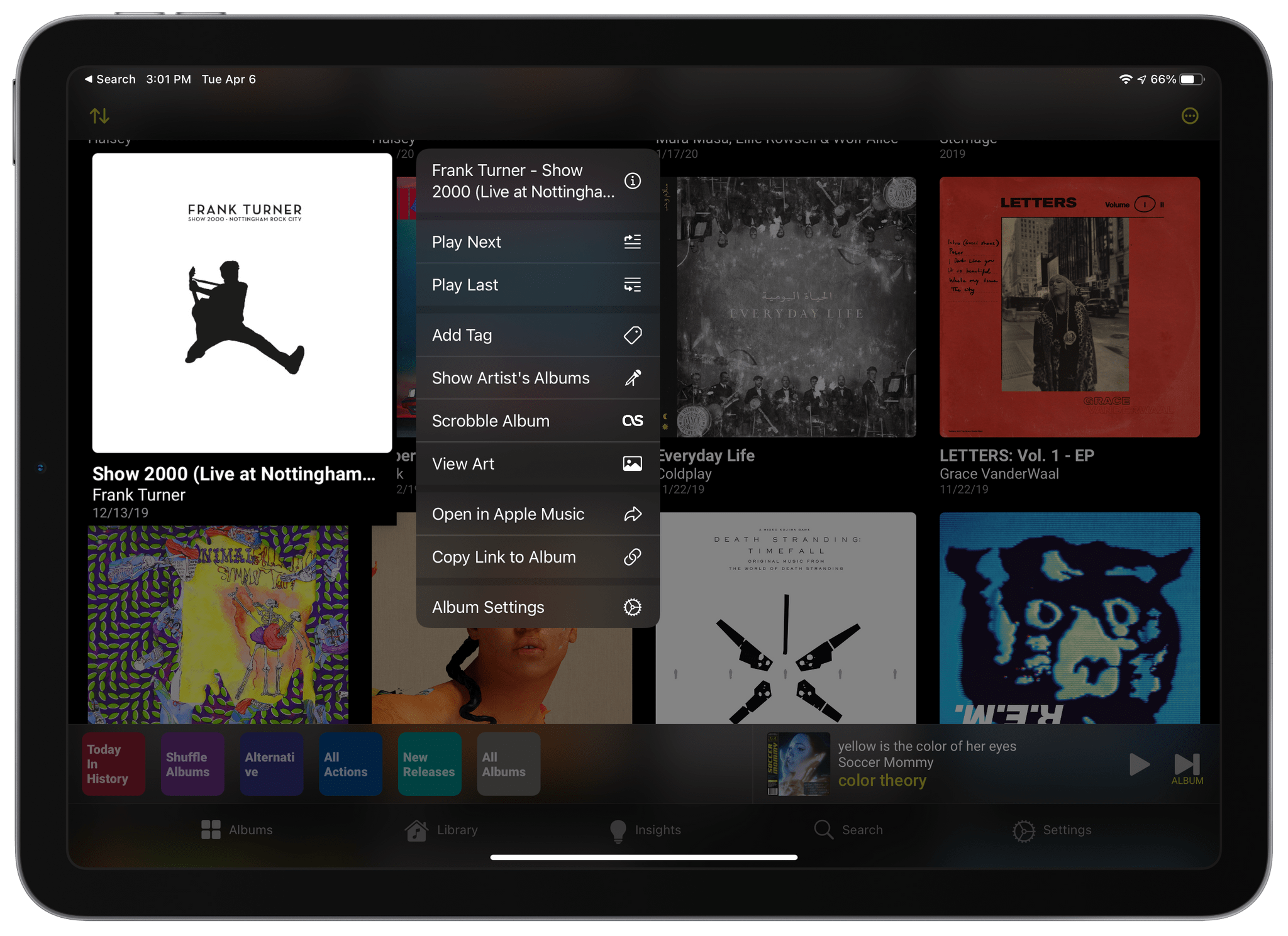 Albums is remarkable for the depth of features tucked neatly away beneath its otherwise simple UI. For instance, the app makes great use of context menus to ensure that power-user features are always just a long-press of the album art away. Version 4.0 of Albums adds to the options found in context menus, enabling the ability to view album art, share an album, open an album in Apple Music, and customize an album’s settings. Combined with the menus revealed when you tap on the buttons in the app’s toolbar, which have also gained new functionality in the latest version of Albums, there’s an incredible assortment of tools always at hand. 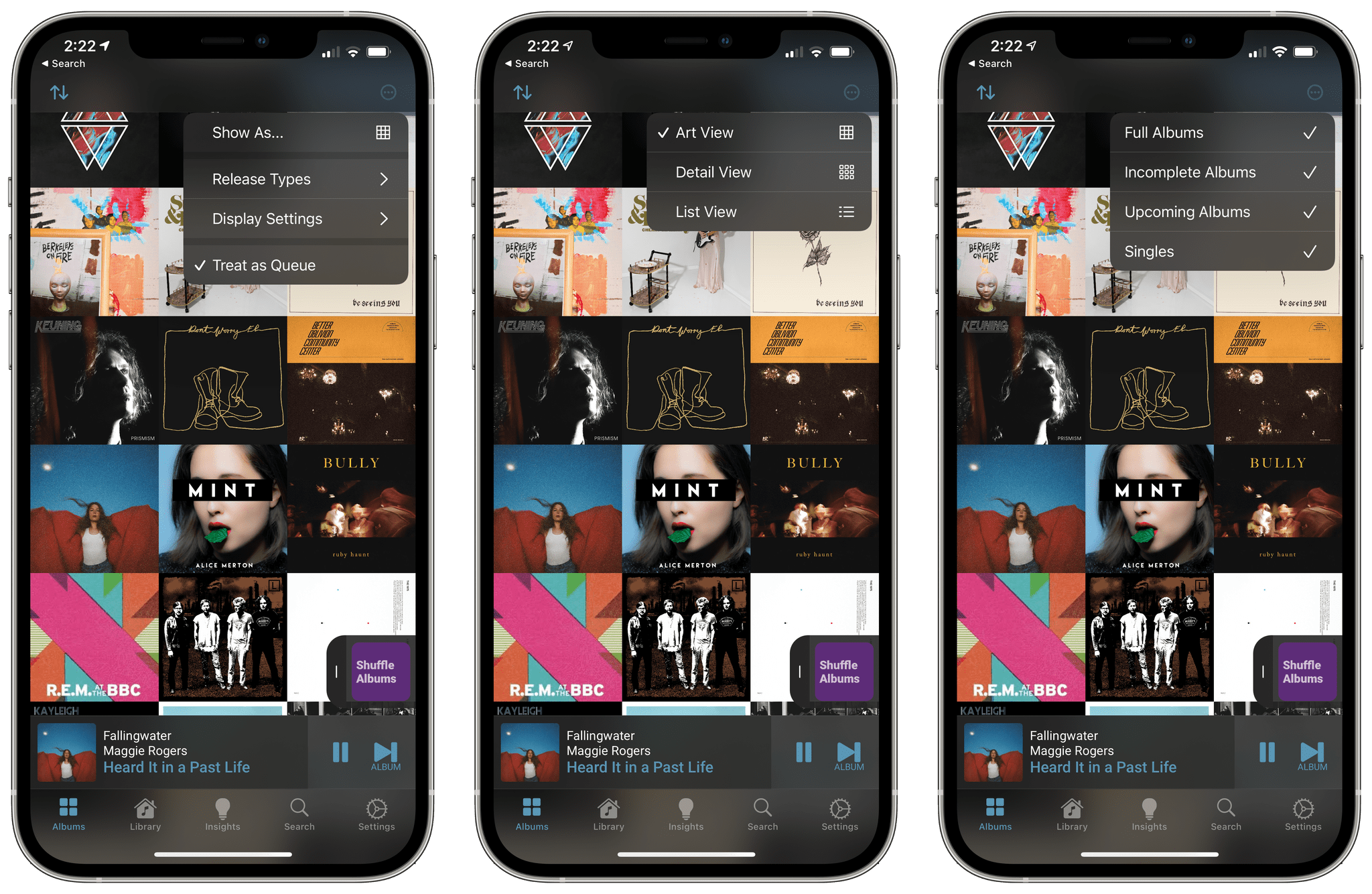 There are extensive customization options behind the three-dot button in Albums’ toolbar.

The three-dot menu is also where you can select the types of music included in the Album view. Your choices are Full Albums, Incomplete Albums, Upcoming Albums, and Singles. You can adjust the size of the app’s grid of album art here too. 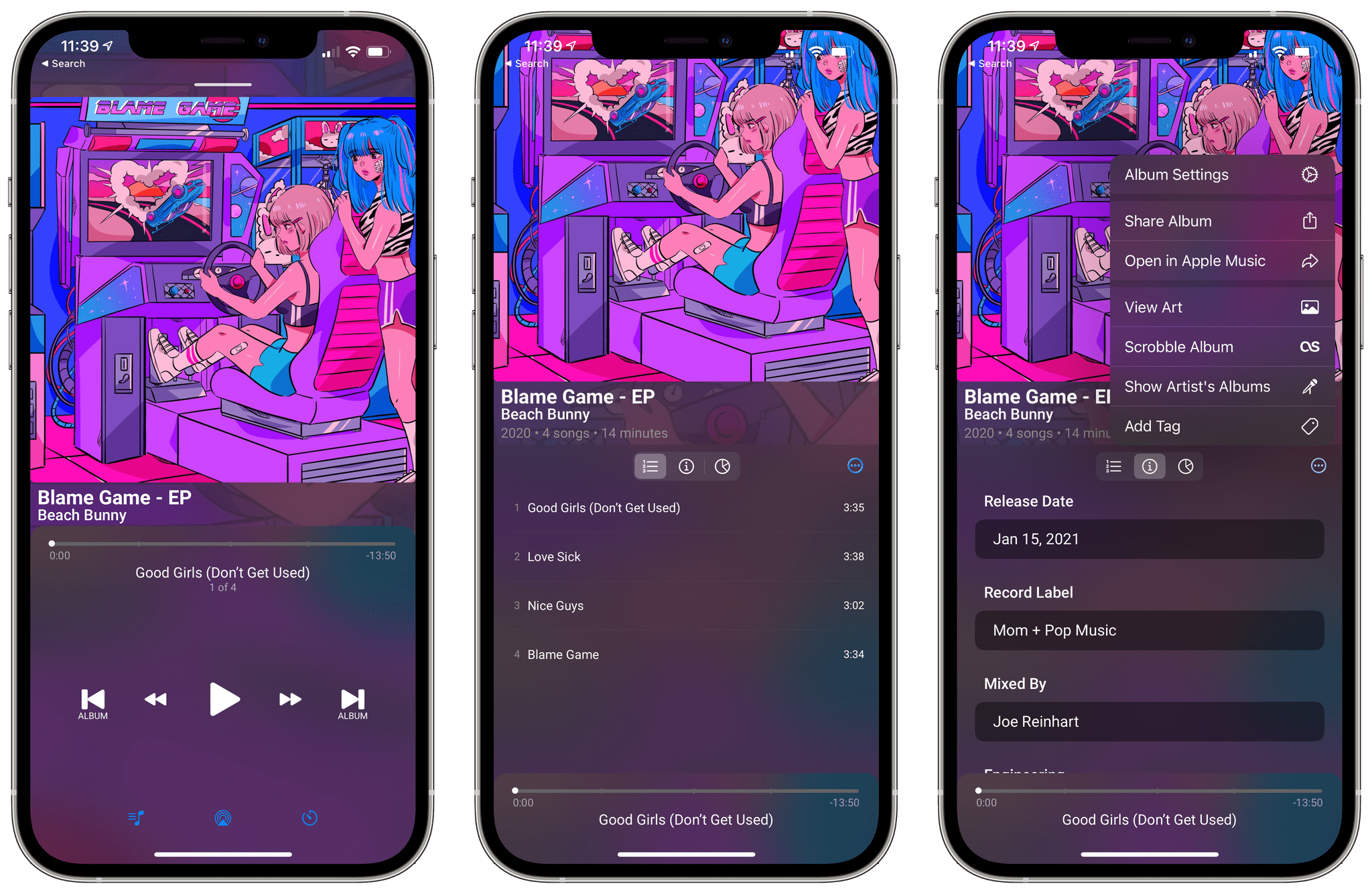 A tracklist and all sorts of other goodies are revealed by swiping up on the album art on the iPhone.

Tapping on an album starts playback and opens the Now Playing view. On the iPhone, the Now Playing screen includes album art, track and album details, plus playback controls that can be optionally tinted to subtly match the album art, which I love. This feature isn’t new, but it has been improved in version 4.0, allowing users to pick a UI color from an album’s settings. On the iPhone, if you swipe up on the album art, it and the playback controls separate, revealing a tracklist and other controls, including album credits, playback statistics, and a three-dot menu button for accessing seven other album actions. This is perhaps my favorite design touch in Albums. I love how easy it is to swipe up to reveal a wide array of power-user features that most of the time I don’t need to see. 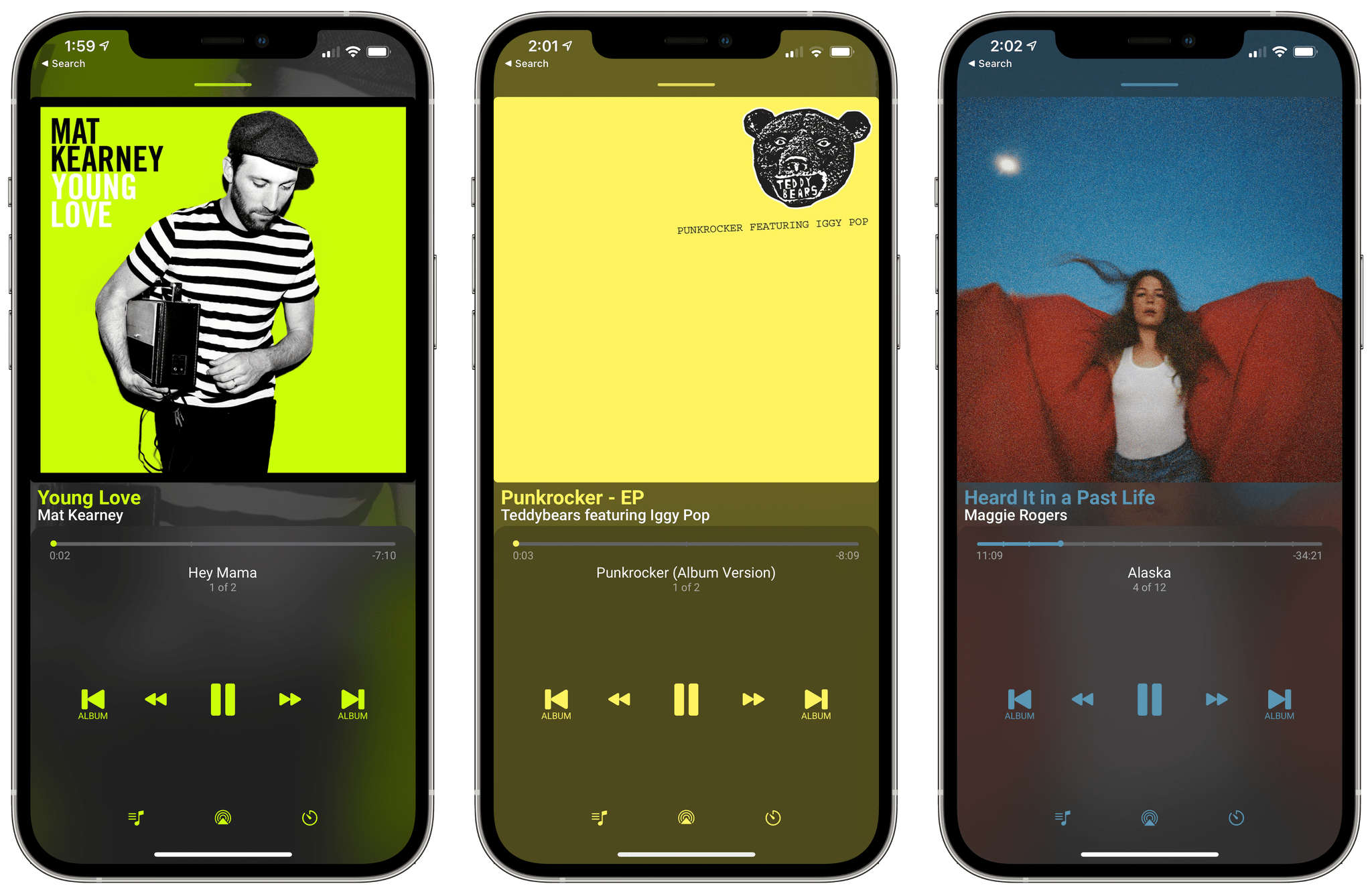 You can optionally tint the app’s UI elements to complement the artwork of the currently playing album.

On the left side of the Album tab’s screen is the sort and filter button. Tap it to pick from nine sorting criteria and add a filter. You’ll run across Albums’ sorting and filtering options in several places throughout the app. There are a total of 13 filter types that can be applied individually or in groups in a way that is similar to how smart playlists work in Music on the Mac. There are a huge number of individual filters that can be built with Albums, but when you add the ability to group them and specify whether albums must meet ‘all’ or ‘any’ of the filters, the possibilities are nearly endless. 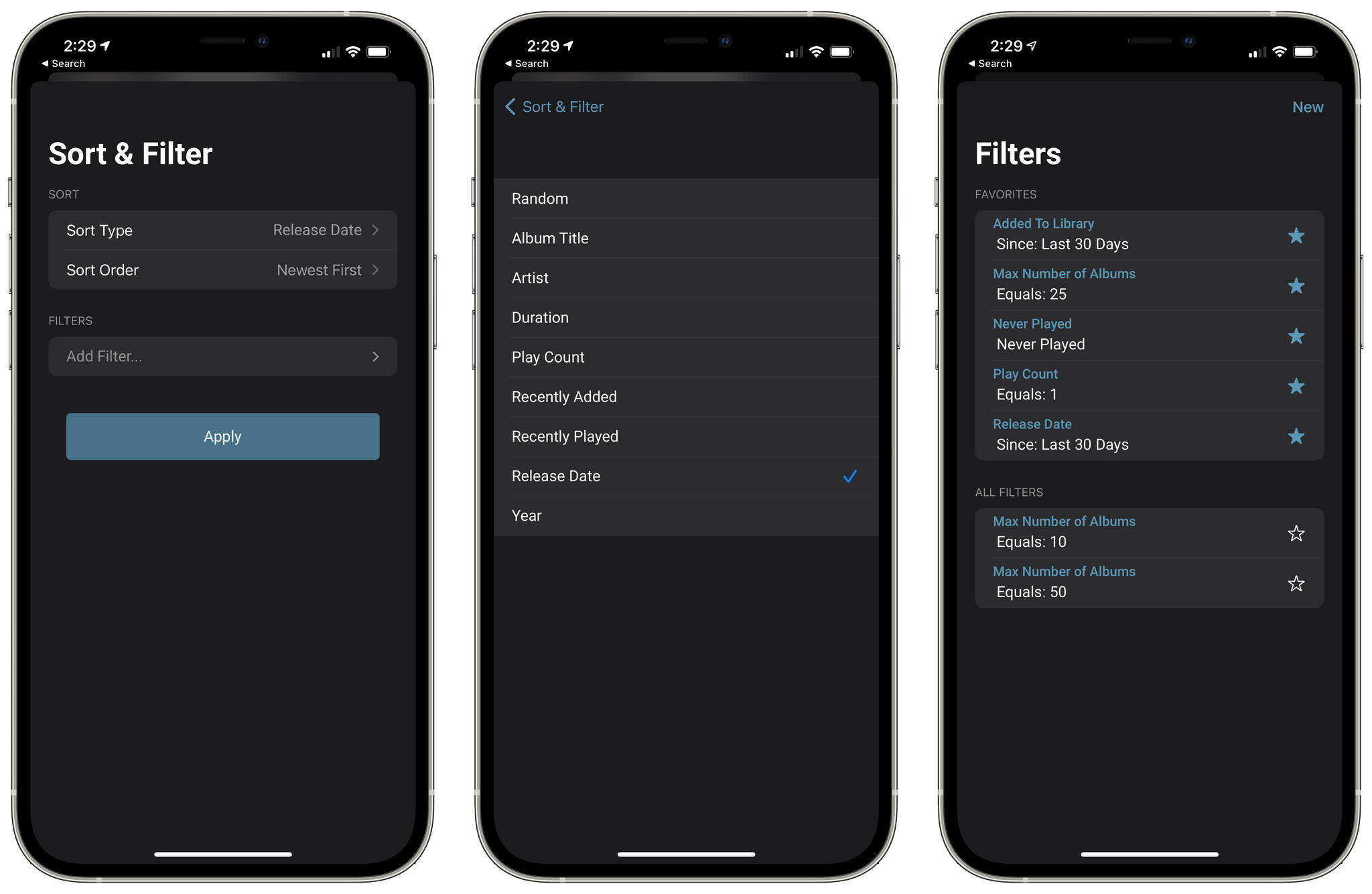 Albums’ superpower is the complex sorting and filtering rules you can apply to your music collection.

Quick Actions, which are available near the bottom of the Albums view are similar, allowing you to create a complex sort and filter rule that applies to a particular category like all albums, an artist, or a genre. It’s fun to explore the options available for creating Quick Actions, and it’s exactly the sort of music nerd, power-user feature that I’d love Apple to do but know they never will. Quick Actions is also the feature that makes Albums an app worth checking out whether you prefer its album-centric approach to listening or not because it’s such a powerful way of navigating your music library. 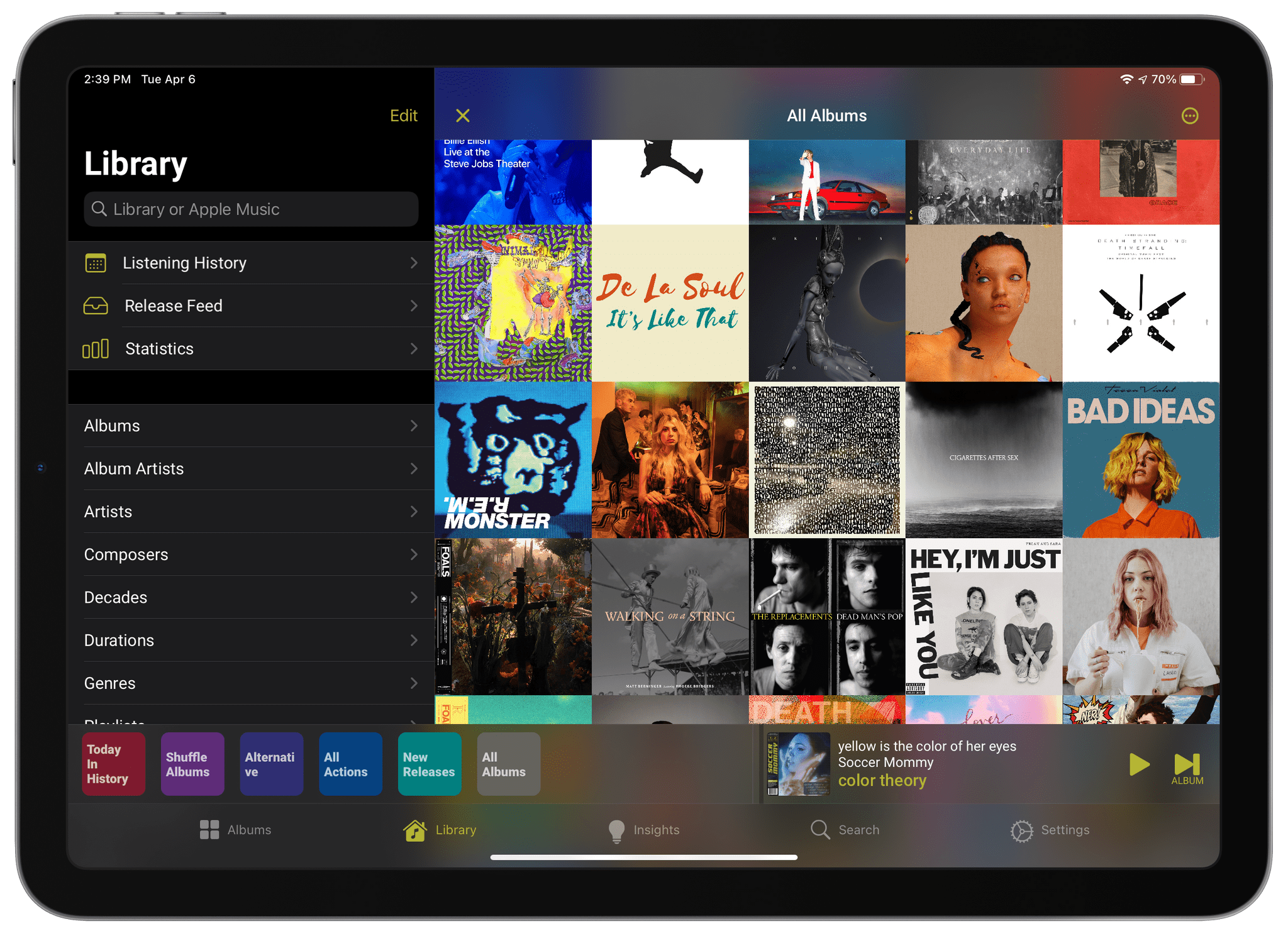 Think of Quick Actions, which occupy a strip near the bottom of the screen, as saved filters similar to Smart Playlists in Music on the Mac.

The next tab, Library, consolidates a wide range of the app’s features and serves as an alternate way of navigating your music library. From here, you can search your library or Apple Music for albums, view your listening history over different time periods sorted newest to oldest and vice versa, view upcoming releases and statistics about your collection and listening, and navigate your library by a long list of categories. All of the above is editable, too, allowing you to tailor the Library view to your liking. The stats are even customizable, allowing you to define your own charts based on several criteria. The app’s Release Feed is one of the newest and most interesting features in version 4.0 of Albums, which builds a MusicHarbor-like list of upcoming and recently-released albums right into your music player.

A sampling of what’s available in the Library tab.

It’s worth noting here that Albums doesn’t sync between devices. I’ve been told that iCloud sync is on the roadmap for Albums, which is something I’m looking forward to. For now, features like Quick Actions and your Listening History don’t sync between devices, which is disappointing if you listen to music on multiple devices. Nor will playback from a Mac be recorded to your Listening History. 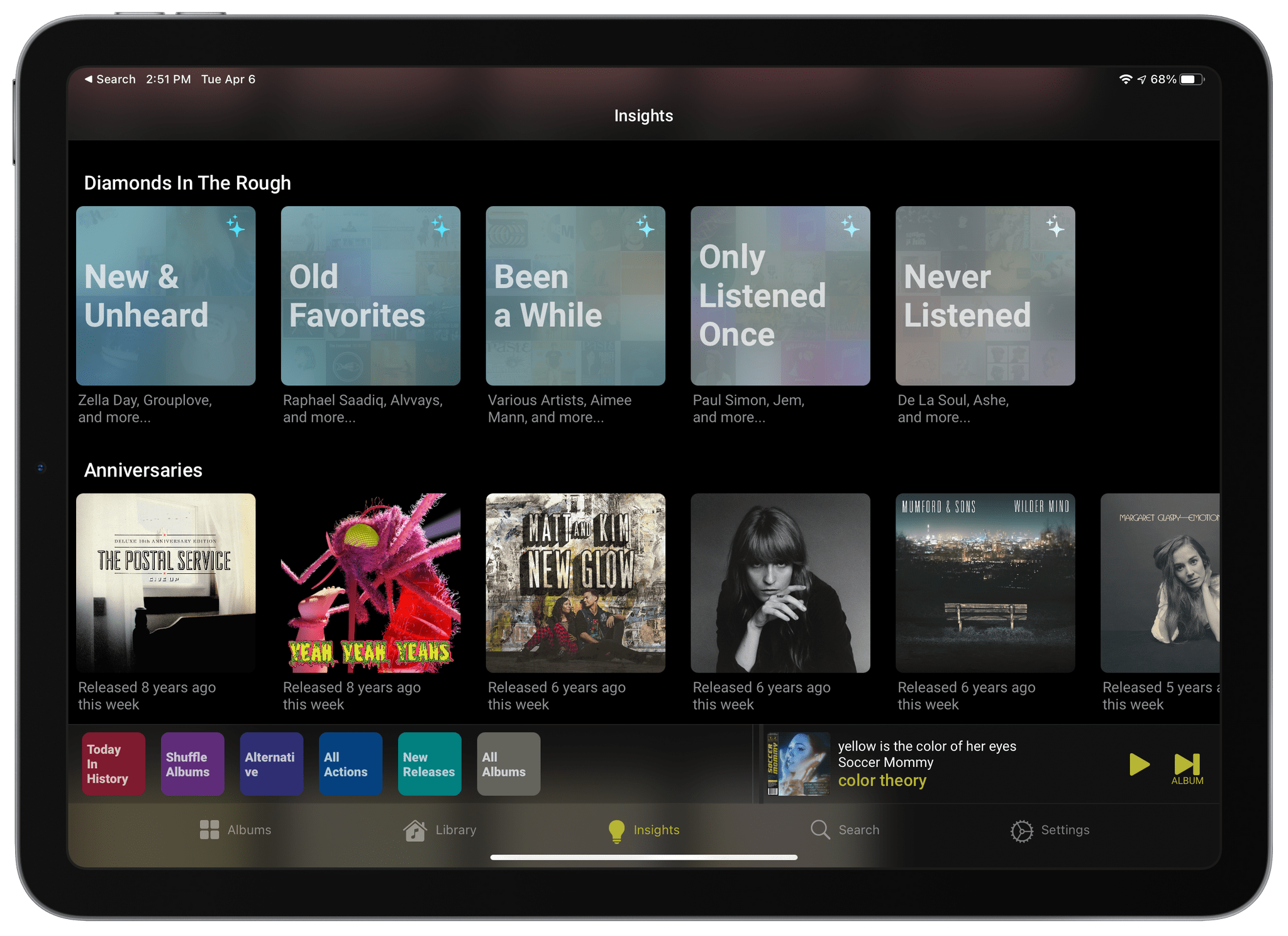 The Insights tab auto-generates a series of related album collections based on parameters like how often the albums have been played and the time since they were added or listened to. Insights also offers a list of albums in your collection that are celebrating anniversaries. For example, this week marks the sixth anniversary since the release of Matt and Kim’s album New Glow. Another way of revisiting older albums is by providing Albums with your birth date, from which it will generate album collections like ‘High School,’ ‘My 30s,’ and the like. It’s a fun way to explore your music tastes as they evolve over time. 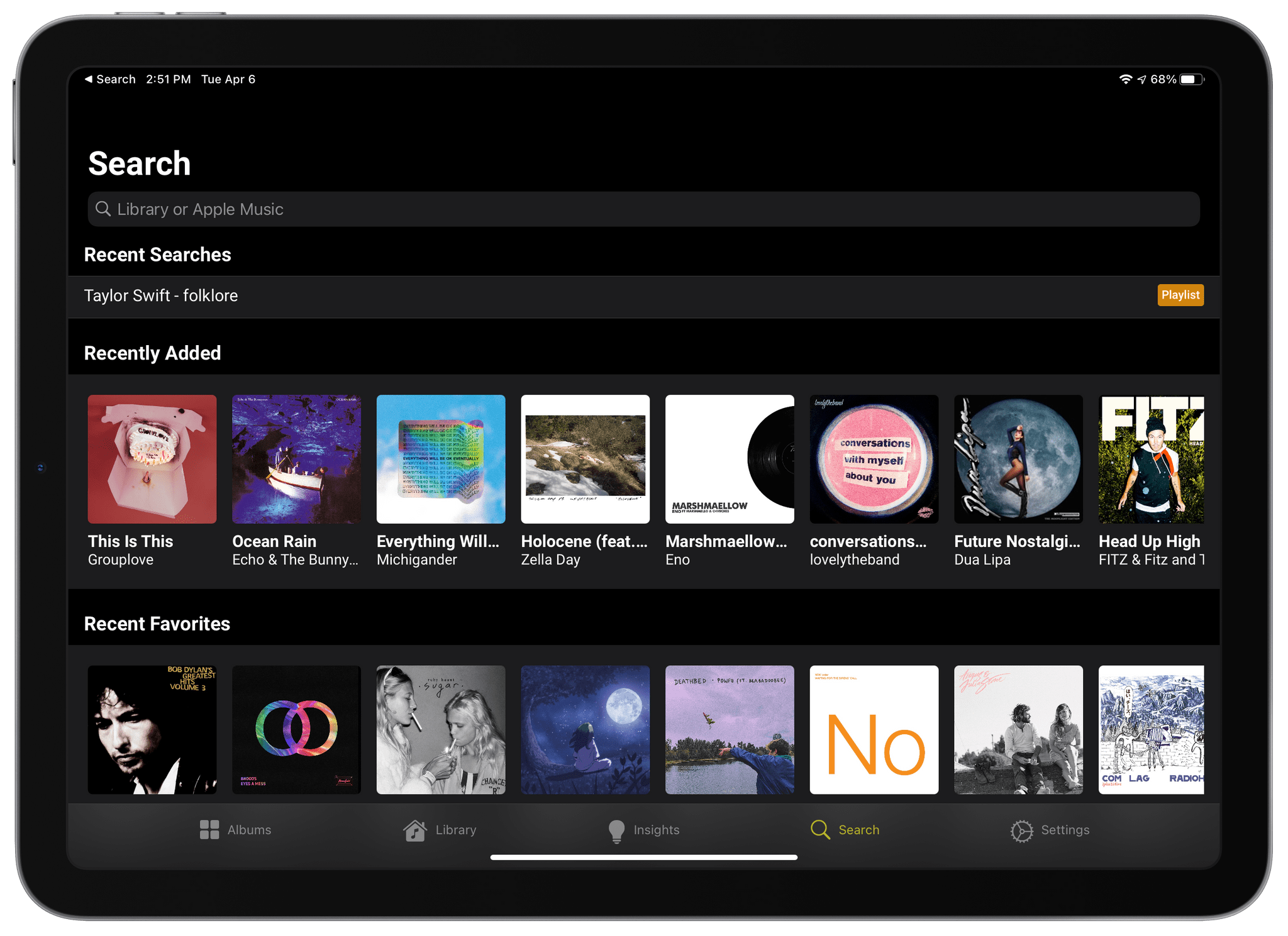 The Search tab works the same way as searching from the Library tab but adds the following three album collections: ‘Recently Added,’ ‘Recent Favorites,’ and ‘Recently Released.’ Search throughout the app is fast and accurate, and the inclusion of recent albums adds a nice dimension to the app, not unlike what Apple did with the Search tab in Music. The final tab in Albums is the Settings tab, and you might expect that it would be packed given the degree of customizability the app offers, but it isn’t. Most customization options are neatly tucked away in various parts of the app’s UI, making them available where needed instead of in a separate tab. I should note, though, that there is a long list of commands that can be donated as Siri commands that will then appear in the Shortcuts app as actions too. I’m glad that support is available, but Albums’ powerful sorting and filtering tools beg for modern Shortcut actions that implement parameters for its filters, which I hope are added in the future. Settings is also where you can sign into Last.fm so your scrobbles are synced to the service.

iCloud sync and a Mac version of Albums are the two things I’d most like to see added to the app. I also miss Apple’s curated playlists and the ability to mark songs and albums as favorites, but except for favoriting albums, I don’t think the other things I’d like added really fit with the app’s design choices.

Despite a few wishes and a couple of bugs I ran across here and there that didn’t meaningfully affect my use of the app, I love Albums 4.0. Adam Linder, the app’s developer, clearly has a passion and love for music that has fueled the creation of one of the most thoughtfully designed third-party music apps on the App Store.

As much as I’ve enjoyed using Albums, though, it doesn’t fit how I listen to music well enough to make it my primary music app. I still consider Albums a valuable alternative for exploring my music collection with its incredible filters, but I just don’t listen to albums much anymore. Using the app’s filters to show just full albums sorted chronologically, I discovered that I’ve only added about 20 full albums to my music library over the past year, a period where I listened to well over 1,000 hours of music.

Over the last several years, I’ve listened to a lot of Apple Music-curated playlists picking and choosing a handful of songs to add to my library or mark as favorites but rarely adding entire albums. That’s a big change from my listening habits of a decade ago. Of course, Albums can handle partial albums and singles too, but it shines brightest if you usually listen to full albums.

That said, I absolutely love Albums and intend to continue to use it to explore my music collection. If you have a big collection of music, I highly recommend giving the app a try. It’s a fantastic way to explore your collection that is also a fun, immersive experience. If you love music, and especially if you take an album-first approach to your music library, you owe it to yourself to give Albums a try.