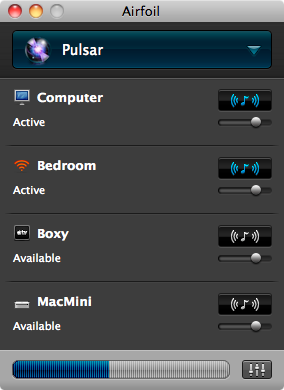 Apple may have introduced AirPlay, but that doesn’t mean Rogue Amoeba is out of the game. In fact, AirPlay is rather limited unless you enjoy hacking your way out of a paper bag, and by no means can it expand its territory outside of iTunes. If you ever wanted to sit back on the couch and watch CNET TV on your 27” Cinema Display through your iPod’s headphones, you’re out of luck. But with Airfoil, streaming audio anywhere allows one to achieve a state of wireless bliss.

Airfoil 4 was announced this morning, thus Federico and I found ourselves beaming audio between devices ensuring Rogue Amoeba’s well polished application met our picky standards. Of course, our efforts were futile considering this band of genius algae wouldn’t launch without ensuring their well tested products work effortlessly. Trust us when we say that there are lots of minor details that really made us smile. We’ll get to the new features (Hulu and Netflix in the video player, Airfoil Speaker controls, and new metadata info) in a bit, but let’s cover some audio basics first. 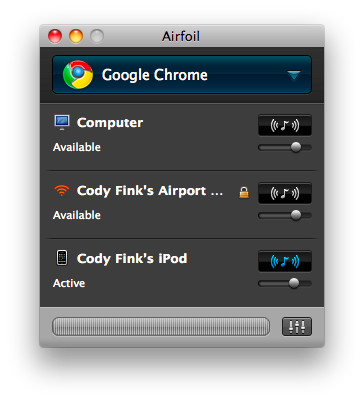 As with any previous release of Airfoil, streaming audio can be had between any number of devices on your network. Fling audio to your iPod, play Youtube on your Mac but listen to it on your PC, and stream your iTunes tunes to an iPad connected to speakers in the living room. Quickly selecting an audio source and output is now easier than ever thanks to Airfoil’s new streamlined interface – we may have borrowed that term from the press release, but honestly we can’t describe the new fit and finish any better. Everything works as you’d expect it to.

I think when people first try Airfoil, they’re disappointed and perhaps turned off that Airfoil has to “Hijack” an application (such as Google Chrome) so you can pump the audio elsewhere. This often requires a restart of the application in question. Fortunately, this is resolved by installing the included Extras in the menu. While it requires a restart, this one time installation prevents you from ever having to slow down your workflow to stream audio from any application. We recommend doing this immediately upon your first run.

As for audio performance, I didn’t encounter much if any lag. I noticed a little bit (streaming audio from Google Chrome for example) when I had a lot of applications open or when my network was congested thanks to a download, but it wasn’t a delay like I expected. Audio remains in sync with videos amazingly, but if you decided to stream audio to an iPod for example halfway through a video, it may chop off a second or two instead of falling out of sync. If you decide you don’t want to stream the audio anymore (or if you pause a video), it’ll continue playing for a brief period of time so that the video remains in sync if you resume on your Mac. I could never really determine if I was out of sync or not which is good - I trust Airfoil to ensure that everything is kosher.

I should mention that Federico in his testing had trouble shooting audio over to his AppleTV. Everything worked fine, but the AppleTV kept shouting at us exclaiming it was busy. We double checked all of our devices to make sure nothing was connected, and we came to the conclusion that either it’s still a buggy implementation or perhaps Home Sharing in iTunes had something to do with it. Then again, it could have just been Federico’s router which we’ve been struggling with lately (hopefully we can hook him up with an Airport Extreme soon), but that doesn’t explain why we were able to connect to other devices in his Italian villa.

When selecting audio sources, you might be baffled or overwhelmed with the amount of choices you have. I had everything from my Dashboard to virtual audio devices available, so I cut down on the clutter by visiting the preferences and deselecting some options in the Interface Settings. Problem solved! 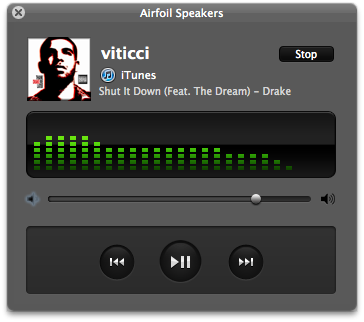 Diving into the new features, Airfoil 4 now presents computers and iDevices running Airfoil Speakers with additional metadata. This data includes things like track titles and album art, and also gives you the ability to fast forward, pause, and rewind audio in some cases. The Airfoil Speakers app on the desktop now allows you to control the parent (host) Airfoil application without having to leave the client computer. (This feature can be disabled to prevent fussy coworkers from putting a halt to your Christmas playlist.) On my iPod, my Mac appeared and revealed my desktop, updating occasionally as I played YouTube videos from Chrome. 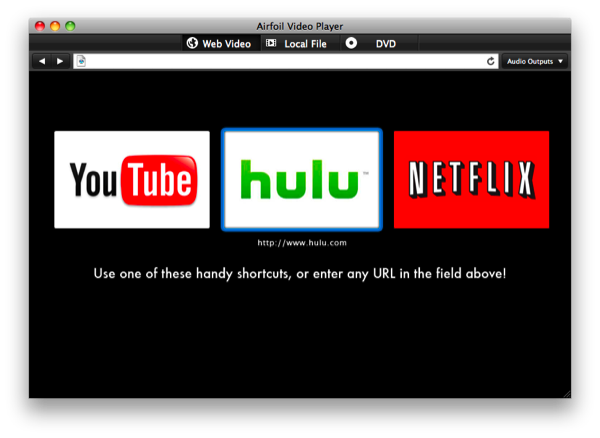 For video, you need not rely on a web browser. Airfoil’s built in video player now gives you access to a couple big sites such as Hulu and Netflix (alongside Youtube) for a built in viewing experience so you don’t have to leave the app. Airfoil Video Player is an additional feature in Airfoil that enables you to stream audio from DVDs or a local file where selected, and we appreciate having a slim interface for casually browsing web video.

Performance wise, Airfoil is similar to AirPlay in terms of the time needed to connect to a device. We found that video and audio were always synced no matter what devices we used, and that the new interface is much more friendly to casual Mac users looking for powerful audio features. Airfoil 4 is a much welcomed update that further simplifies and expands our ability to enjoy content wirelessly, and we think it’s quite solid*. You can try the trial and purchase Airfoil anew for $25 from Rogue Amoeba’s site here. Be sure to leave your thoughts in the comments below!