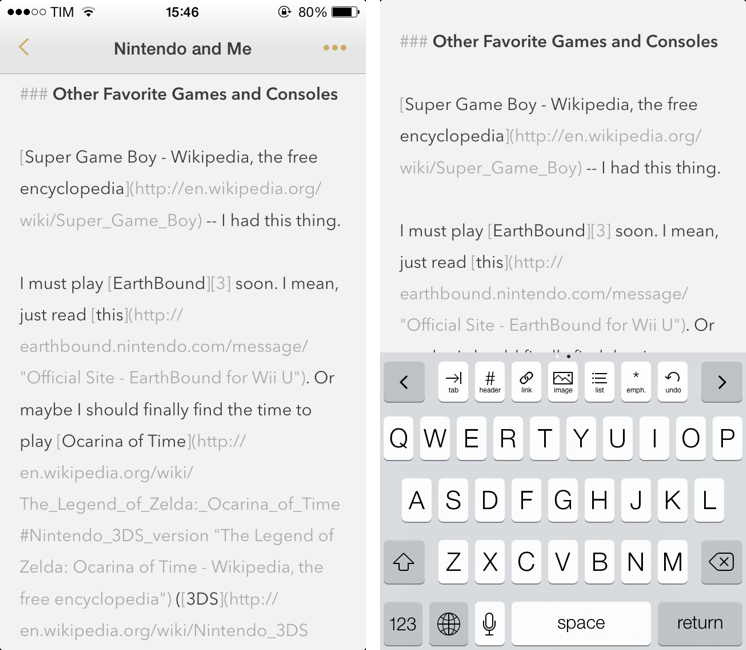 Byword is my text editor of choice on the iPhone, and the one I recommend to anyone who’s not willing to play with Editorial and its advanced automation features on the iPad. While not as customizable as Zorn’s app, Byword is, in my opinion, the most powerful Markdown and Dropbox-compatible text editor for people who want to take notes, export to HTML, and perhaps publish posts to services like WordPress or Evernote. I have already covered the solid feature set of Byword and the reason why I prefer it to other text editors for iOS in my review of version 2.0.

Released last week, the 2.1 update makes Byword an iOS 7-only app that takes advantage of new technologies provided to developers to bring a better writing and reading experience for Markdown users. The first change is the adoption of the Text Kit API: built on top of CoreText, Text Kit gives developers better and easier control over layout and rendering of text; Apple has been working on it for over two years, and they’re using it themselves in their new iOS 7 apps. For Byword, Metaclassy leveraged Text Kit to convert one of Byword for Mac’s finest features – syntax highlighting – to iOS. In practice, pieces of Markdown syntax (characters like asterisks or URLs from inline links) will be dimmed in the editor, letting you focus on what matters – your text. This is perfectly in line with iOS 7’s prioritization of content and clarity, and it works just like Byword for Mac.

In general, Byword has been slightly redesigned to match the iOS 7 aesthetic and use a yellow tint color to indicate interactive elements (like navigation buttons) and the cursor/text selection. The gold/yellow color has been a distinctive choice of Byword 2.0, and it makes sense to use it in Byword 2.1 for iOS 7. Unsurprisingly, the app also lets you swipe from the left edge of the screen to navigate back to the previous view – another addition that matches Apple’s new iOS 7 apps; AirDrop sharing has been added to the app’s existing Export menu under Tools > Export > Share.

Last, the keyboard. Using iOS 7’s new “frosted glass” look, Byword now integrates automatic character pairing (for parentheses, asterisks, quotes, and square brackets) in the main keyboard, and reduces the number of swipeable rows in the extra input accessory to two. While I’m still not completely sold on the look of the iOS 7 keyboard, I believe that Byword 2.1’s superior integration of shortcuts and keys makes for a faster, more intuitive experience.

Byword 2.1 is a nice update, but I would have liked to see the app adding support for background refresh and a more powerful URL scheme; in this version, you’ll still be forced to wait while the app refreshes the list of available documents at launch, which can take a few seconds on 3G. Byword remains the Markdown text editor for everyone, and I’m looking forward to a deeper implementation of iOS 7 technologies in the future.

Byword 2.1 is available on the App Store.