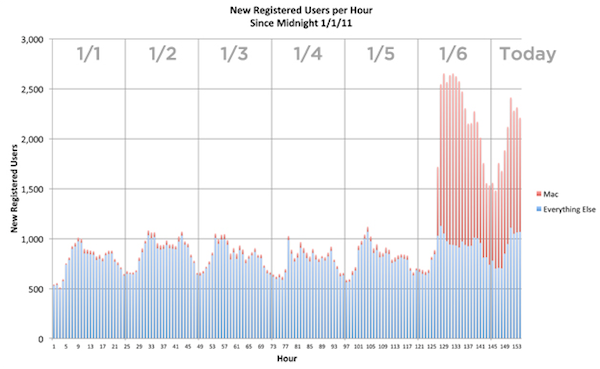 The Mac App Store is off to a great start. More than 1,000 apps already available, some of them ports of old and popular Mac applications, some of  them new ones specifically built and designed for the new Store. Some long-time Mac developers even decided to ditch their previous distribution systems and go Mac App Store-exclusive. More than 1 million downloads happened on the Mac App Store’s first day, and the first sales numbers show that the effect on the popularity of existing Mac apps has been incredible.

The developers of Alfred, an application launcher and Spotlight replacement for OS X, reported thousands of new downloads in the first 24 hours, while Evernote, a cross-platform “memory tool” and digital assistant, announced a 1800% increase of sign-ups through the Mac client, released for free in the Mac App Store. But a picture, as they say, is worth a thousand words, so here’s the Mac App Store effect visualized in a simple graph.

Courtesy of the Evernote team, the graph shows the signups to Evernote through the Mac before and after the launch of the Mac App Store.

Each column shows the number of new users that signed up for Evernote every hour starting at midnight on New Year’s Day, up until a couple of hours ago. The red portion shows how many of those new users came from the Evernote Mac client.

Impressive. And, again, these are new people signing up to Evernote for the first time, not existing users downloading the app from the Mac App Store. It will be interesting, though, to take a second look at this chart in the next weeks, once the novelty of the Mac App Store wears off and more OS X users will slowly upgrade to 10.6.6 (which is required to use the Mac App Store).

Will these numbers grow or slow down over time?