The Mac App Store was released as part of the Mac OS X 10.6.6 update earlier than expected. The new Store to discover and download Mac software opened its doors a few hours earlier than many initially thought, which means it’s been out for more than 24 hours now. Still, several developers were waiting anxiously this morning to check the sales numbers of their apps in the first day of the Mac App Store, as provided by Apple’s iTunes Connect service. And while many are still experiencing issues when trying to generate reports from IC’s “Sales & Trends” section, the first numbers are in. And they’re pretty interesting.

First off, our friend Steve Streza posted the sales numbers of his new Mac app Todolicious, which we previewed here. Todolicious is a simple app to manage to dos on your Mac inside a clean window, with minimal effort. The app is sold at $4.99 in the Mac App Store, and ranked at #68 in the Top Paid chart, peaking at #38 during the day. Currently, it sits at the #70 spot in the Top Paid chart. It also gained the #11 position in the top paid Productivity apps. The app sold 245 copies on the Mac App Store’s first day.

At a $4.99 selling point, this works to a first day revenue of $857.50. That’s globally, with the majority of sales obviously coming from within the United States.

Streza also confirms our thoughts about Angry Birds and Twitter for Mac being the most downloaded apps in the Store:

From our findings and position in the charts, it’s clear that the majority of the 1 million launch day downloads were for the two heavyweights, Angry Birds and Twitter. The majority of application developers will have seen low sales numbers on launch day.

He also thinks the need of installing a system update to use the Mac App Store may set some users back from upgrading just yet.

The developers of Unretina, another app we covered here, saw downloads of their app literally skyrocket in the first 24 hours of the Mac App Store. The developers expected between 100 and 1000 downloads for the utility, and they were very surprised to find more than 3000 only in the United States this morning:

Wow. And given it was only open for a few hours in countries like Australia, we expect there should be some good numbers tomorrow as well. 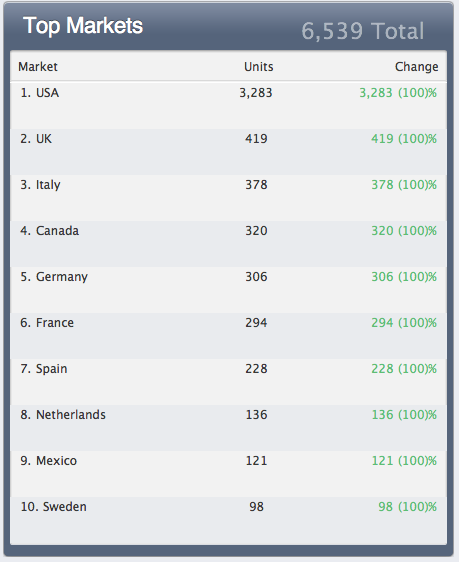 MacRumors is reporting other noteworthy app sales figures as well. Chopper, a popular game for iOS and OS X, sold nearly 30,000 copies of its “2.0” version, grossing over $20,000 in a single day. Other developers contacted by MacRumors include the guys behind 4x4 Offroad Racing, which sold 93 units so far. Davide Ficano, developer of Visual Differ (a $3.99 utility to compare folders and files side-by-side) told us that the app generated 65 sales in its first day.

It will be interesting to follow the developments of the Mac App Store and whether or not the “race to bottom” to offer apps at lower prices will happen pretty much like it did on the iOS App Store. Apple and other developers are clearly setting a trend with full-featured applications and professional tools sold at $29.99 and above; we’ll see how that will play out in the long term.