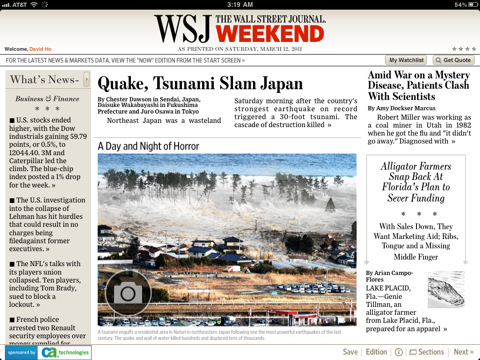 It appears that Apple has finally decided to start forcing apps to abide by its new in-app purchase and subscription rules that became enforceable at the start of this month. It appears that the first big casualties will be the Wall Street Journal and Kobo apps. The Wall Street Journal has reported that their apps will soon remove all purchasing options from their apps and Kobo, the Canadian e-Book retailer, has already done something similar. Both apps had been linking users to their website to purchase subscription content which had been forbidden in Apple’s new rules, as detailed below.

Apps that link to external mechanisms for purchasing content to be used in the app, such as a “buy” button that goes to a web site to purchase a digital book, will be rejected.

Neither app has or had been rejected, instead Apple seems to have opted to talk directly with Kobo and News Corporation, as both have or will soon be updating their apps to remove the offending links. Curiously both apps will not be using Apple’s own in-app purchasing system to allow users to purchase content or subscriptions. Both firms still feel as though the terms are too onerous, despite Apple relaxing the restrictions in June to allow content to be sold through the in-app purchasing at a different price. Previously the rules were going to require all subscription content to be available for purchase through the in-app system and at the same or lower price (despite Apple’s required 30% cut).

Kobo’s Mr. Serbinis said to the Wall Street Journal that roughly 50% of their iOS app users already bought content through their website, but that this change “will inconvenience those customers accustomed to buying their books directly from our apps on Apple devices”. Similarly, a News Corp spokeswoman said “We remain concerned that Apple’s own subscription [rules] would create a poor experience for our readers, who would not be able to directly manage their WSJ account or to easily access our content across multiple platforms”. Both companies seem reluctant to offer in-app purchases and cede 30% of revenues to Apple, despite even being allowed to charge customers more if purchasing in this method. It follows other publishers such as The New York Times and various Conde Naste magazines, which have embraced Apple’s in-app subscriptions and purchases.