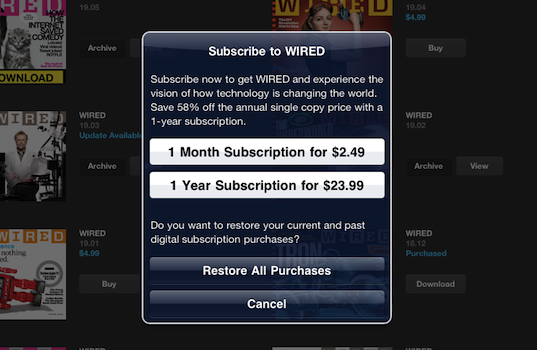 With an update to the Wired app today, it becomes the latest iPad magazine from Conde Nast to utilize Apple’s in-app subscription service after they began implementing it in all their magazine apps earlier this month. Wired now offers users four ways to consume the Wired magazine on the iPad, they can continue to purchase individual issues for $3.99, pay $1.99 for a monthly subscription, $19.99 for a yearly subscription or if they are already a print subscriber, access the app for free.

The subscription offerings will allow users to access the monthly editions until the subscription runs out. Opting to purchase individual issues will mean users get to permanently purchase that issue and re-read it at a later time without a subscription.

Today’s update follows last month’s update that brought enhanced sharing and shopping features to the app, and to celebrate they made the issue available for free. According to Howard Mittman on Twitter, that proved successful because the issue has become the most downloaded, beating the record set by the first iPad edition of Wired, which had over 100,000 downloads.