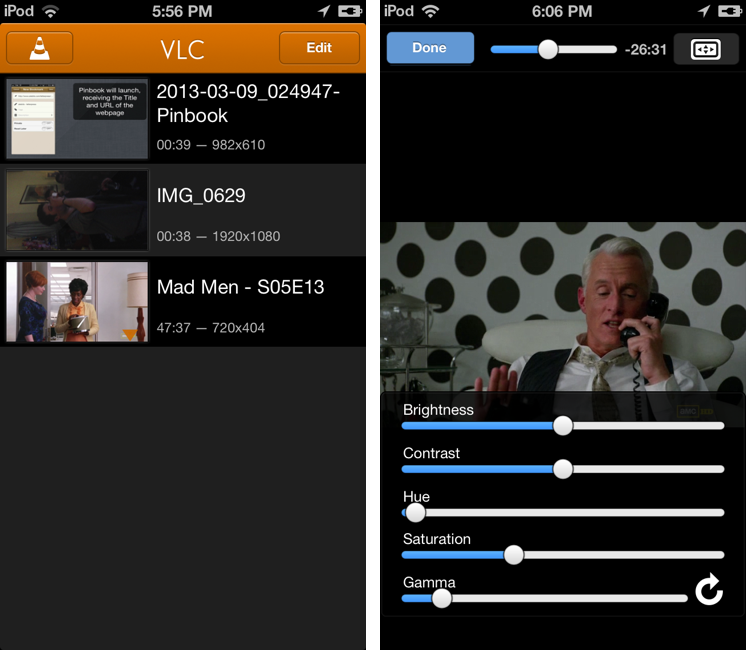 After a two-year absence, popular video player VLC is returning to the App Store with a new app for the iPhone and iPad. The new VLC for iOS will be available later today (it will start propagating at midnight in the various international App Stores) as a free download.

I’ve been able to test the new VLC for iOS for the past few weeks, and, in terms of visual appearances, the app isn’t too dissimilar from the old version that was available on the App Store in 2010. A main screen lists all your media with thumbnail previews, and you can tap on an item to start playback in a full-screen media player. However, in spite of a UI reminiscent of the old version, VLC has been completely rewritten to use modern audio and video output modules, multi-core decoding, and support for any file type supported by VLC on the desktop. In my tests, the app was able to quickly start playing any video file that I threw at it, such as .mp4 and .mkv files.

Aside from improvements under the hood, there are several new options for uploads and downloads: available in the Settings, VLC supports a “WiFi Upload” feature that lets you upload files through a desktop web browser running on the same local WiFi network, as well as a new “Download from Web Server” option where you can enter the URL of a file you want to download within the app. The app comes with support for Network streams, iTunes file sharing (which I have been using to load files from my Mac), and Dropbox integration. Dropbox is interesting, as it lets you download any file from your Dropbox account, but I don’t like the way the VLC team implemented navigation across folders: if you navigate inside a sub-folder, you’ll notice that there’s no way to go back to the main folder because the Back button takes you straight to the Settings, where you’ll have to tap on Dropbox again and start over. The VLC team says that more cloud services will be added in the future, and I’m also looking forward to improved navigation.

For users who have been looking for a way to protect the videos they load on iOS devices, VLC has added a passcode lock option in the Settings. 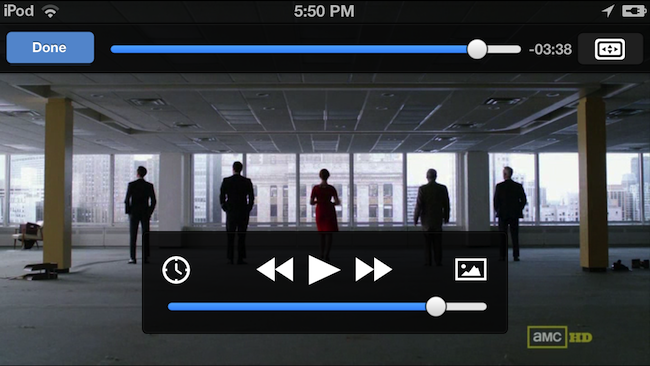 The video playback screen contains new features, too: you can adjust the playback speed, play around with real-time video filters (Brightness, Contrast, Hue, Saturation, and Gamma are supported), and enjoy proper subtitles (including Closed Captions and complex SSA). Audio can be played in the background – a useful feature if you want to quickly check on Twitter or Facebook during a movie or TV show.

While testing VLC on my 5th-gen iPod touch and trying to play a video recorded on my iPhone 5, I noticed an alert that said that the device I was using was probably too slow to play the video. I asked the VLC team about it, and they told me that, since third-party party video players still cannot use the DSP (hardware acceleration unit) included in iOS devices unless they use the MediaPlayer framework, clips taken by the device fail to play as the used encoding profile is too demanding.

VLC for iOS is fully open-source: its code will be available online by tomorrow and is “bi-licensed under both the Mozilla Public License Version 2 as well as the GNU General Public License Version 2 or later”. The VLC team is confident that, this time around, there won’t be issues with copyright holders that will force them to pull VLC from the App Store.

The new VLC is a nice video player that supports a good variety of video formats and encodings. It may not be as full-featured as other video players that have come out on the App Store over the past two years, but it should be enough for most people and, as mentioned above, it will be free like its desktop counterpart. VLC for iOS will be available later today on the App Store.