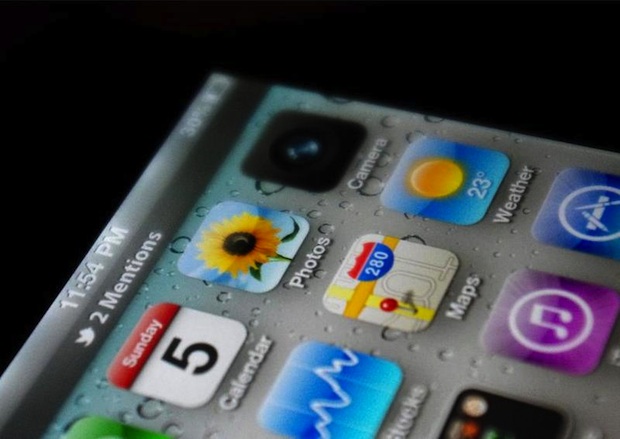 TechCrunch posts a photo of what could be the Home screen of an iPhone running iOS 5, set to be officially introduced tomorrow at the WWDC keynote in San Francisco. TechCrunch doesn’t report the original source of the photo and says this might be a well-realized mockup based on recent rumors and speculation, but MG Siegler notes some interesting facts about the image may suggest it is genuine and not another Internet fake:

Could it be? Is this it? iOS 5?! I honestly have absolutely no clue. But it certainly seems like it at least could have the right idea.

Before you go yelling “fake” on the obvious things, a couple notes. First of all, yes, 11:54 PM is in the future — in the United States. But if the Weather app is to be believed, this is clearly a European version of iOS (note the 23 degree Celsius in the icon instead of 72 degree Fahrenheit as you would see in the U.S.). Second, the Camera app icon is totally different, and looks a little odd being all-black, but who knows, maybe it’s changing. The icons are in the “correct” default order. Finally, if the talk of deep Twitter integration into iOS 5 is to be believed (we heard a bit, others have heard a bit more), it’s entirely possible that these new-style Twitter notifications could be working in iOS 5 right out of the box.

It is true the photo above has the icons in the same default order every device comes out of the box with. Another detail: in the Utilities folder next to the iTunes Store, there seems to be another app right below Calculator. In Apple’s default configuration, there are only four apps in the stock Utilities folder. If the image is to believed, iOS 5 would come with the old iOS 4 default wallpaper (as the WWDC banners indicated) and a revamped camera icon. It wouldn’t be the first time Apple updated a stock app’s icon with the launch of a new version of iOS 5.

More importantly, the image shows the rumored Twitter integration with a new notification bar. Several reports in the past week claimed Apple was working on “deep” Twitter integration for iOS 5 with features such as native photo uploading and contact access from the Address Book.

TechCrunch has a pretty solid track record when it comes to Apple rumors and last-minute leaks, though there are always some questionable images showing up before every major Apple event. We don’t put much faith in the photo either, but we’re posting it for discussion as it seems to fall in line with rumors we’ve heard in the months leading up to WWDC 2011.