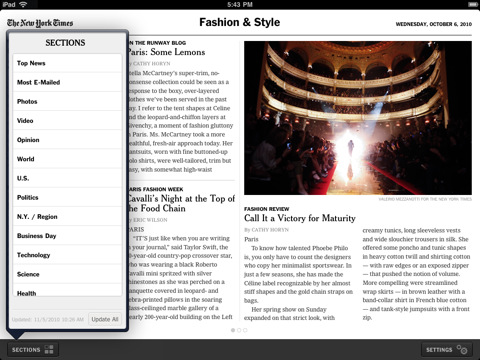 With the June 30 deadline approaching for publishers willing to implement recurring subscriptions in their iOS apps, Apple just got the first big name on board with the new iTunes subscription system: the New York Times will comply to Apple’s terms and offer in-app subscriptions by June 30 to give iPhone and iPad users to subscribe to the NYT with the one-click option touted by Apple.

As reported by All Things Digital, the New York Times decided to play Apple’s game rather than pull their iOS apps from the App Store. The New York Times will give 30% of revenue from subscriptions away to Apple, and give up on customers’ data as Apple’s subscriptions are based on opt-in sharing of personal info with the publisher.

That doesn’t mean that subscribers who want access to the Times on their iPad or iPhone have to buy access through iTunes, just that theycan. And that the Times will comply with Apple’s new rules for any of those sales.

The Times says its paywall packages will also work with Google’s Android platform as well as Research In Motion’s Blackberry. But the Times won’t be selling subscriptions through Android or Blackberry app stores, says spokesperson Eileen Murphy; the only two places to buy access to the paper will be through its site, using its e-commerce engine, and via Apple.

Doing some quick math, the New York Times’ “all digital access” package at $35 per month will cost customers $455 per year to be able to read contents of NYTimes.com from their browser, smartphone or tablet. In spite of these announced paywall plans, the publication has confirmed that some content will remain free for everyone: even if you don’t subscribe, you’ll still be able to read 20 articles for free from the web browser, and possibly more if you’re accessing the NYTimes from referral sites like Twitter, Facebook, and Google. The NYTimes hasn’t provided details of how native smartphone browsers will play with this pseudo-free limit, but I have the feeling some people will manage to hack the system and somehow read more articles than officially permitted. We’ll see.

This subscription model doesn’t sound too bad to me. We all knew the NYTimes was going to become a paid publication eventually, and if you really care about the content (and the quality) being pushed by the web site $35 per month for full digital access might be an acceptable deal. Clearly the New York Times aims at capturing more audience by differentiating the offer for desktop, smartphone and tablet users, and it will be interesting to get to know the actual subscriber numbers in the next months. But in the meantime, Apple has won the NYTimes over with iTunes subscriptions. And in spite of all the backlash and speculation in the past weeks, iOS users will love these 1-click subscriptions.