During an online-only event from Apple Park in Cupertino, Apple introduced a new iPad Air that looks as though it will rival the iPad Pro in many respects. The company also took the wraps off its 8th generation base-model iPad, which features a faster SoC.

The previous-generation iPad Air was unveiled in March 2019 as a mid-tier iPad between the base model and iPad Pro. That model was essentially a cheaper version of the discontinued 10.5” iPad Pro updated with new internals. The older model Air started at $499 and supported many of the same features as the iPad Pro with the notable exceptions of Apple’s ProMotion technology and the second-generation Apple Pencil. 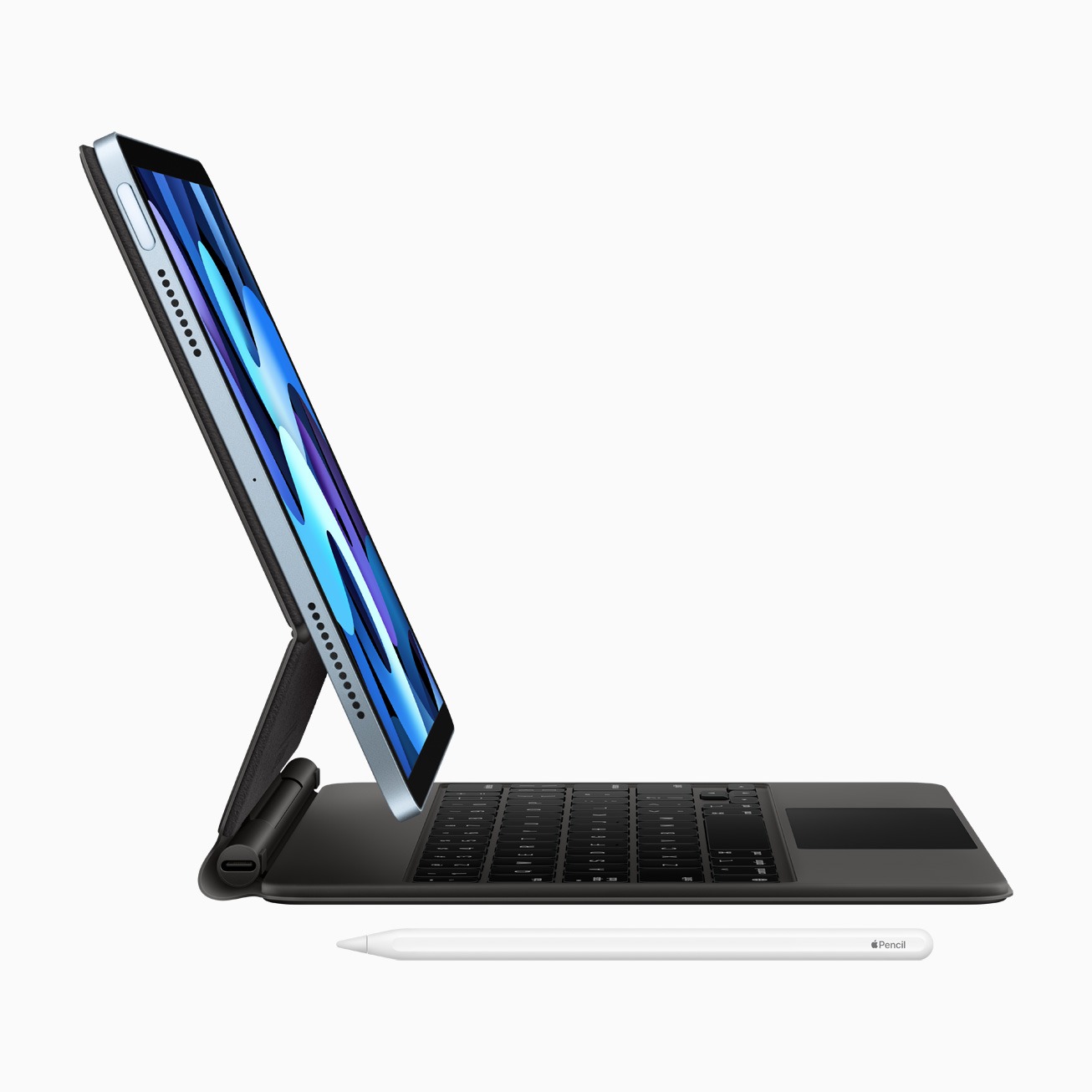 Today’s Air update comes much closer to the specifications of the iPad Pro, both in looks and specs. The new iPad Air that Apple introduced today features an iPad Pro-like design with flat sides and an edge-to-edge screen, but also differs from the Pro in significant ways. The Air comes in five colors. Whereas the previous model only came in silver and space gray, the new model adds rose gold, green, and sky blue. The hardware differences don’t stop there, though. The Air uses Touch ID like its predecessor, but instead of being embedded in a button on the bezel of the device, the Touch ID sensor is in the power button on the top of the iPad. Apple says the new sensor is its fastest yet. 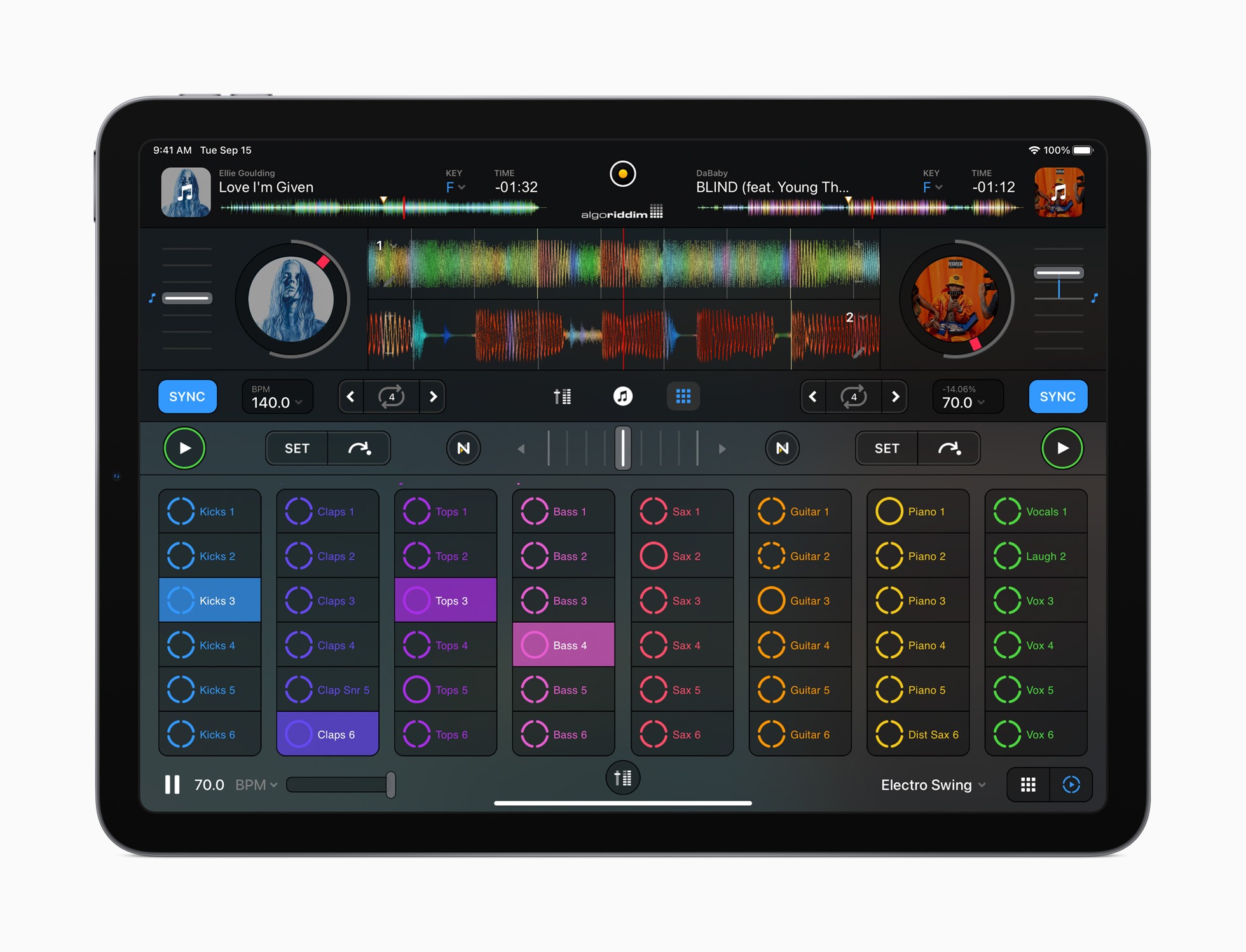 Weighing in at one pound, the new Air is the same weight as the model that it replaces but with a screen that is 10.9 inches thanks to its edge-to-edge design. Like the previous version of the Air, this model is also 6.1mm thick. The Air is available in 64 and 256GB models, charges via USB-C, and comes with an upgraded sound system with a set of stereo speakers.

From an accessory standpoint, the new Air graduates to supporting the second-generation Apple Pencil and works with the Magic Keyboard made for the 11” iPad Pro. There is a new Smart Folio cover that comes in five colors available too. 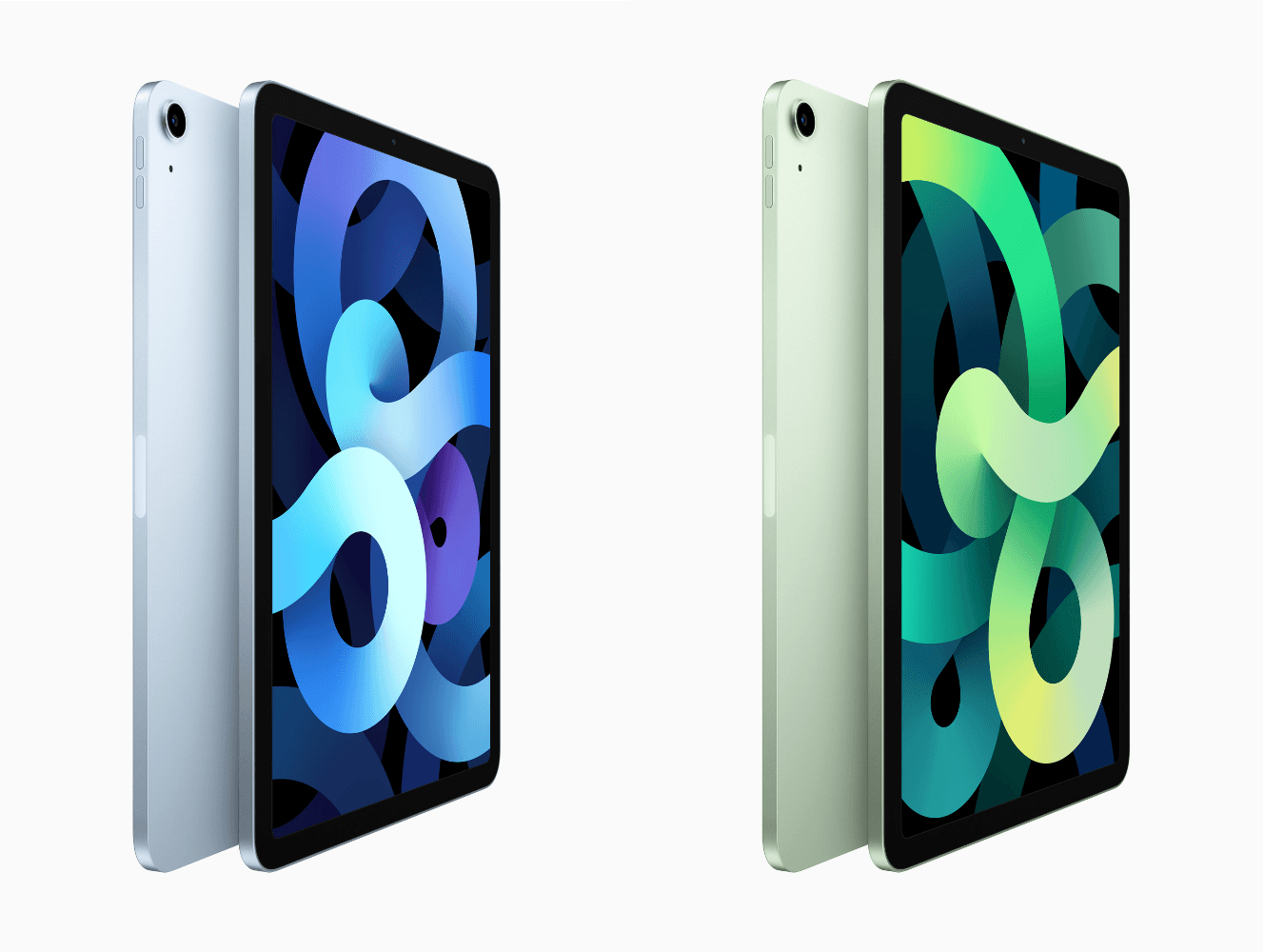 Like the Pro, the new Air’s screen is Liquid Retina curving at the corners. The display is 2360 x 1640 pixels for a total of 3.8 million pixels that are packed in at 264 pixels per inch. The screen also supports P3 color and Apple’s True Tone technology, but not ProMotion, which remains limited to the Pro model and means Apple Pencil latency is double that of the Pro.

Other iPad Pro features not found on the iPad Air include:

The iPad Pro also has twice the CPU and GPU cores of the Air, which has four.

The camera on the back of the iPad Air is the same as on the iPad Pro at 12MP. The rear-facing camera also has an f/1.8 aperture, automatic image stabilization, support for Smart HDR, Focus Pixels, and can record 4K video at 24, 30, or 60 fps and 1080p video at 30, or 60 fps. On the front of the iPad Air is a 7MP camera with an f/2.0 aperture that can record 1080p video at 60 fps. The Air also features 4K video out via its USB-C port, but data transfers are limited to 5Gbps, half the potential 10Gbps of the iPad Pro.

According to Apple, the new hardware of the iPad Air allows for significantly improved performance. The A14 Bionic SoC that drives the iPad Air is built using a 5-nanometer process. That allows Apple to pack 11.8 billion transistors onto the 6-core CPU and offer 30% better GPU performance. In practice, those numbers translate into better textures and shading in games, faster machine learning processing for apps like Pixelmator Photo, which I covered earlier today, and new features in resource-intensive apps like Djay all of which were demoed during Apple’s event.

The iPad Air will be available in October, starting at $599, $100 more than the previous model. 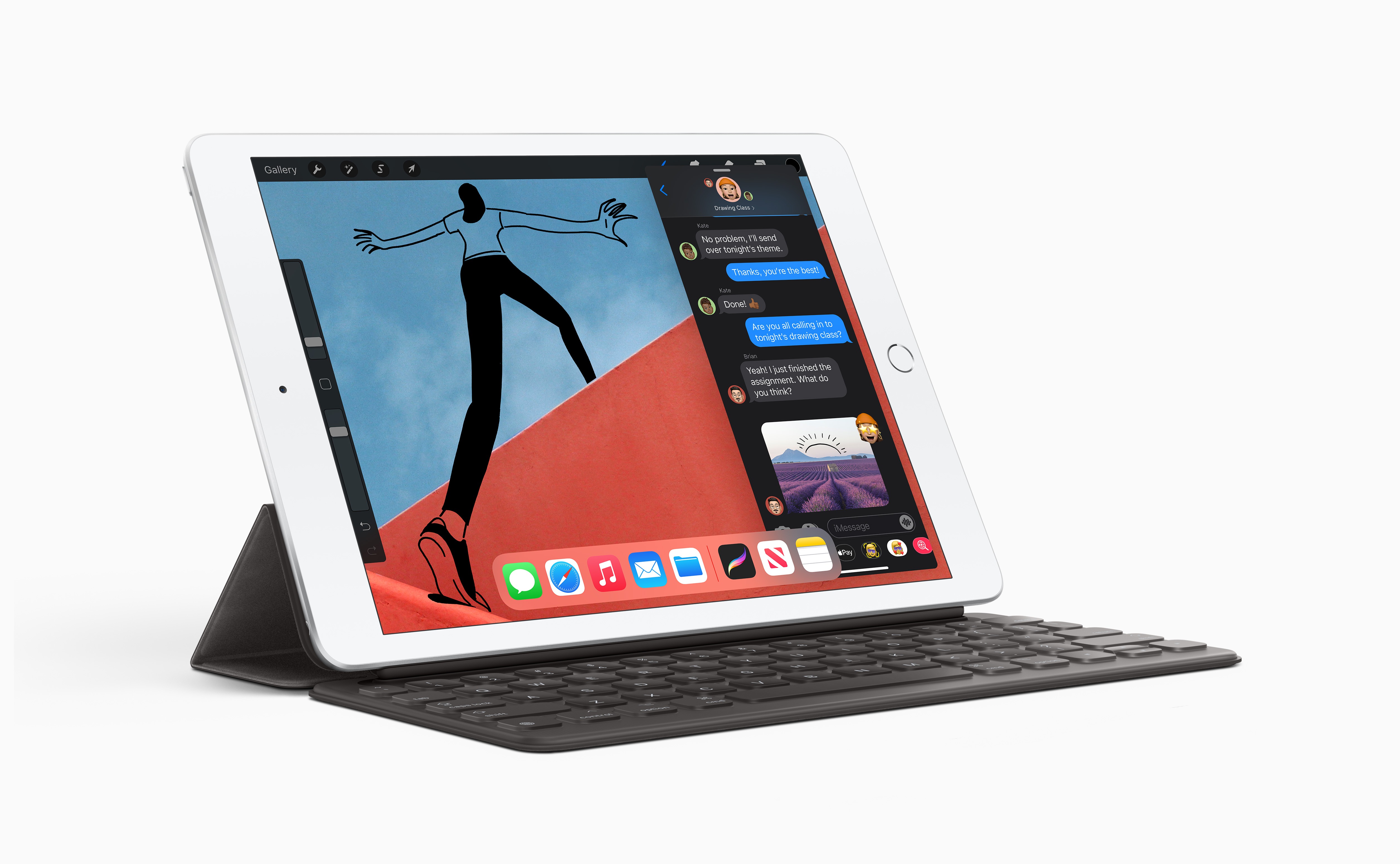 The main change to the eighth-generation iPad is a beefier A12 SoC. Source: Apple.

Apple’s base-model iPad, which features a 10.2” display, has been updated too. The new eighth-generation model has been upgraded to an A12 Bionic SoC. Unlike the iPad Air, the eighth-generation iPad has not been redesigned. Still, the upgrade to the iPad’s internals promises to make a meaningful difference for users.

According to Apple, the A12 is 40% faster than the SoC used in the previous model. That results in graphics performance that is twice as fast as before, and as Apple emphasized significantly faster than a Windows laptop, Android tablet, or Chromebook. There’s a new Smart Cover for the device that is available in eight colors too.

The eighth-generation iPad can be ordered today with availability on Friday, September 18th. Pricing starts at $329.

The thing that surprised me most about the iPad announcements today is just how far the Air has leaped forward. Although there are still meaningful differences between it and the 11” inch iPad Pro, the gap appears far narrower than ever before. The additional cores on the A12Z, Face ID, and ProMotion are all important features that make my 12.9” iPad Pro an important part of my work setup, but the power of the iPad Air should be more than sufficient to serve as an even more portable device for around the house or when traveling. It will be very interesting to see how these two devices compare when tested side-by-side.