At their education event held in Chicago earlier today, Apple announced an update for the 9.7” iPad model that, while not adopting all the features from the more powerful iPad Pro line, brings support for the Apple Pencil and includes the A10 Fusion chip.

“iPad is our vision for the future of computing and hundreds of millions of people around the world use it every day at work, in school and for play. This new 9.7-inch iPad takes everything people love about our most popular iPad and makes it even better for inspiring creativity and learning,” said Greg Joswiak, Apple’s vice president of Product Marketing. “Our most popular and affordable iPad now includes support for Apple Pencil, bringing the advanced capabilities of one of our most creative tools to even more users. This iPad also has the power of the A10 Fusion chip, combined with the big, beautiful Retina display, advanced cameras and sensors that enable incredible AR experiences simply not possible on other devices.”

As detailed by Apple’s Greg Joswiak at the company’s keynote, the marquee addition to the new iPad is integration with the Apple Pencil.

Using the same instant, Lightning-based pairing and tilt and pressure sensing as the iPad Pro, owners of the 9.7” iPad will be able to draw, sketch, and annotate in thousands of apps that have added Pencil integration since late 2015. Today, Apple has also announced new Pencil functionalities for their iWork suite of apps, including an upcoming Smart Annotation mode for Pages.

Notably, the new iPad, unlike the Pro models released in 2017, doesn’t have a ProMotion display; for this reason, it’s possible that drawing with the Pencil on a 2017 iPad Pro will still appear smoother and more fluid than on the new 9.7” model thanks to the higher display refresh rate.

The other change from the old (fifth generation) 9.7” iPad is the adoption of the A10 Fusion chip in its non-X variant (both 2017 iPad Pro models have an A10X Fusion chip). According to Apple, the A10 Fusion chip in the 9.7” iPad features a 2x CPU improvement over the A8 chip and 2.7x faster graphics; by comparison, the CPU in the A10X Fusion chip is 2.5x faster than the A8, while the graphics are 4.3x faster. Judging from these numbers, the iPad Pro remains the best iPad model for maximum graphics performance in games and other GPU-heavy applications. 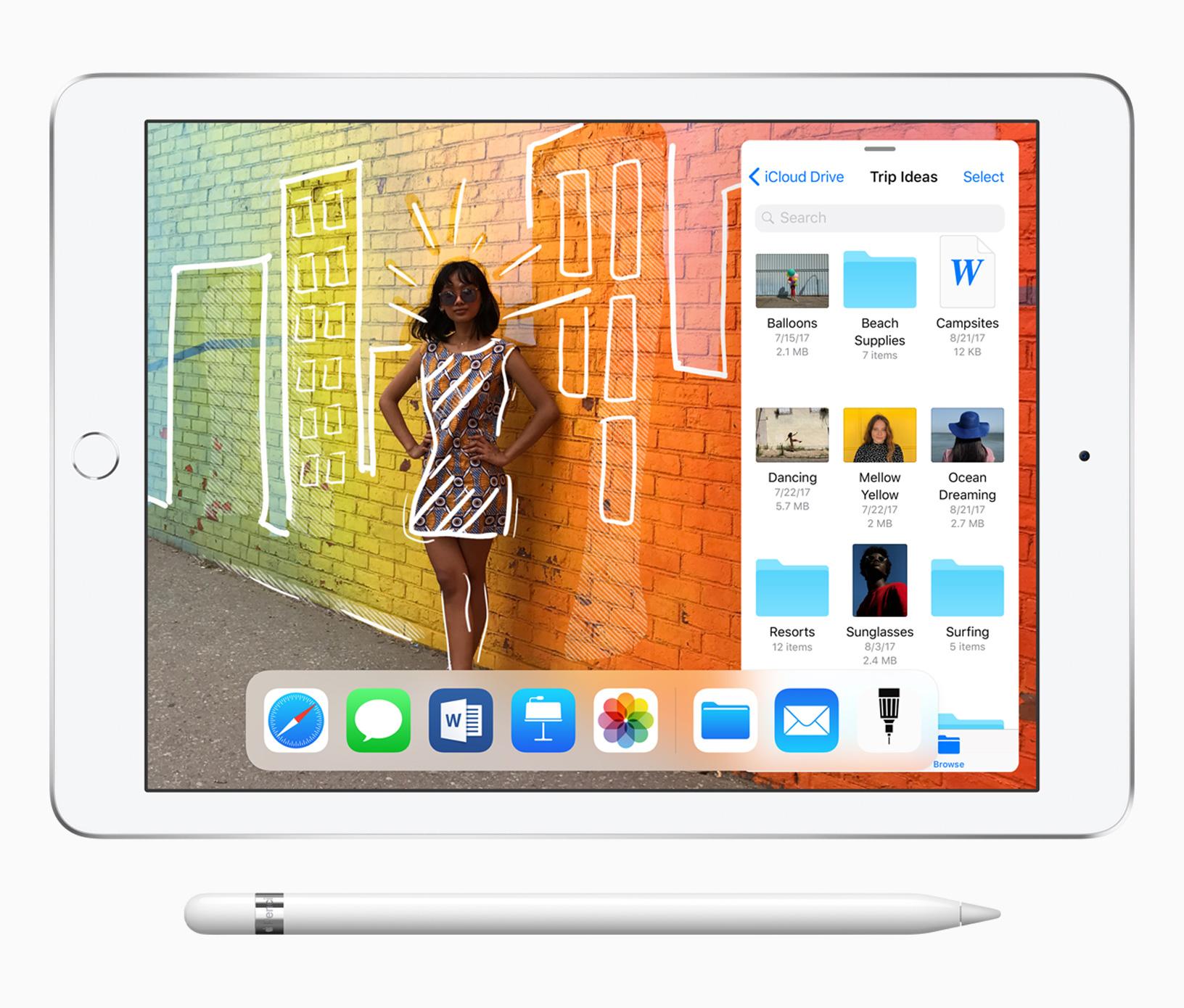 Besides the lack of ProMotion technology and the A10 Fusion chip in lieu of the A10X version, it’s important to call out other features missing from the new 9.7” iPad as they explain why Apple was able to add Pencil integration – an important milestone for schools – while keeping price the same ($329 for consumers; $299 for education).

Notably, in addition to ProMotion, the A10X chip, and various camera differences (which you can check out here), the new iPad does not have:

Thus, while the Apple Pencil and A10 Fusion chip may draw some comparisons with the iPad Pro line, it’s worth keeping in mind that the new 9.7” model isn’t designed to be an iPad Pro competitor. Apple’s main goal with this refresh was to let Apple Pencil integration trickle down into the iPad line to reach the more affordable model that can be sold for $299 to educational institutions, which are likely to gain more benefits from the Pencil and A10 Fusion chip than, say, a True Tone display or wide color.

The education story around the new 9.7” iPad doesn’t stop at the Apple Pencil though. In a surprising move, Apple has partnered with Logitech for the Crayon, a digital pencil that “leverages technology found in Apple Pencil” to deliver low-latency drawing with sub-pixel precision and support for tilt in a kid-friendly design perfect for students. 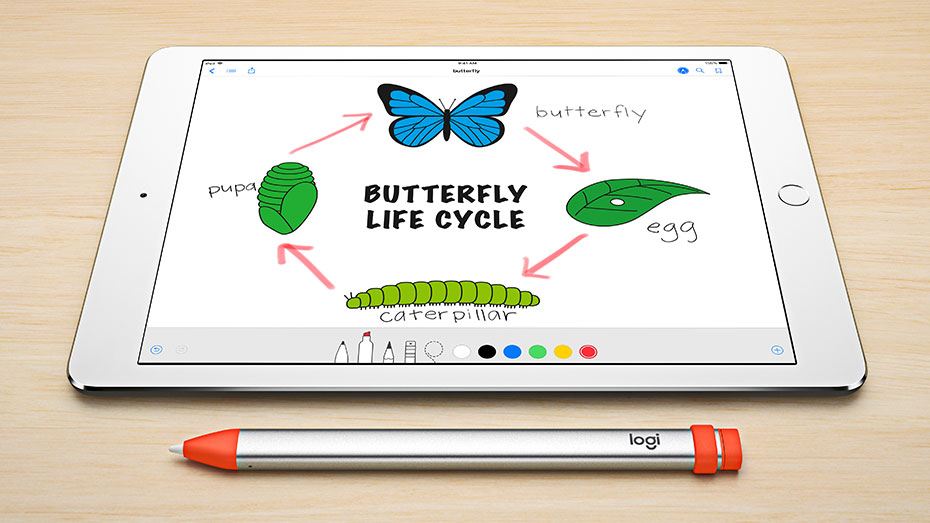 While the underlying technical details are unclear, here’s what I was able to understand about the Crayon from Logitech’s press materials. Logitech has teamed up with Apple to use some of the underlying Apple Pencil technology for input precision, palm rejection, and low latency. The Crayon works with the same apps that support Apple Pencil input and can adjust its line weight depending on the angle you’re using it. Logitech’s website shows Crayon being used in Apple Notes and iOS’ system-wide Markup mode. According to iMore’s Serenity Caldwell, the Crayon will not support pressure sensitivity and doesn’t use Bluetooth.

The Crayon is exclusive to the 6th-gen 9.7” iPad and it can be charged with a Lightning connector. It has “almost” 8 hours of battery life and automatically shuts off after 30 minutes of idle time. Like the Apple Pencil, the Crayon supports a charging boost mode to provide 30 minutes of usage with just 90 seconds of charging. To pair the Crayon, however, you have to press a button for two seconds, which flashes a green indicator that “instantly” connects the device to the iPad. The indicator also flashes differently during usage to show you battery life – something the Apple Pencil doesn’t offer. 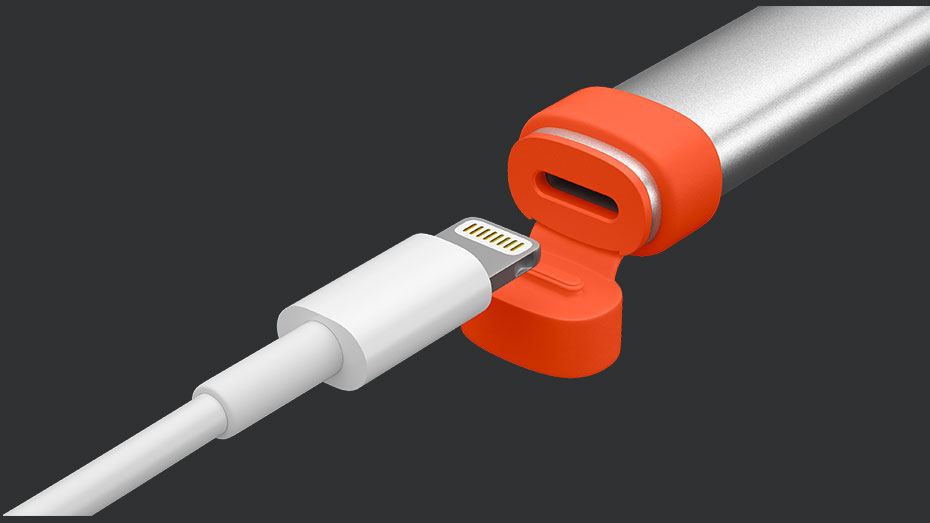 In addition to a flat shape that prevents it from rolling off desks, the Crayon features a smart tip that can’t be removed by kids using it – it requires a special tool. Plus, the rubber cap one the other end is tethered to the Crayon itself so it can’t be misplaced.

These design decisions and the implementation of Apple Pencil technology suggest that Apple wanted to offer a Pencil-like product for younger students, and worked with Logitech to develop the Crayon. It’ll be interesting to see how integrated the Crayon will be with the rest of iOS and if performance will be truly comparable with the Apple Pencil.

Today, Logitech has also announced a new version of their Rugged Combo case, simply called the Rugged Combo 2. Like its predecessor, the Rugged Combo offers protection from bumps and drops, has a pry- and spill-resistant detachable keyboard, and comes with an adjustable kickstand. 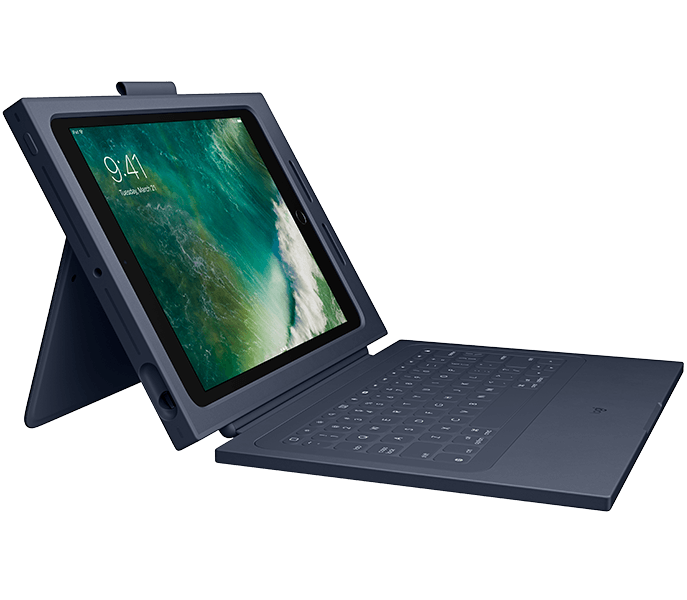 The Rugged Combo 2 supports four different modes (Typing, Viewing, Notebook, and Travel) and it magnetically connects to a custom connector attached to the case. Logitech isn’t using neither Bluetooth nor the Smart Connector, but a proprietary system that sources power directly from the iPad using the Lightning port. Furthermore, the Rugged Combo 2 features a built-in holder for the Crayon and a Lightning connector pass-through that fits popular charging carts used in schools. Unlike the Crayon, the Rugged Combo 2 is compatible with both 5th and 6th-gen iPad models.

The new 9.7” iPad is available in three colors (Silver, Space Gray, and Gold) and starts at $329 for the 32 GB, WiFi-only version. More expensive 128 GB and Cellular options are also available (pricing details here). The Apple Pencil can be purchased by education customers at $89 instead of $99. As noted by MacRumors, Apple also reduced the price of AppleCare+ for the 9.7” iPad and iPad mini to $69 in the United States. The new iPad is available to order today and will arrive in more than 25 countries and regions later this week.