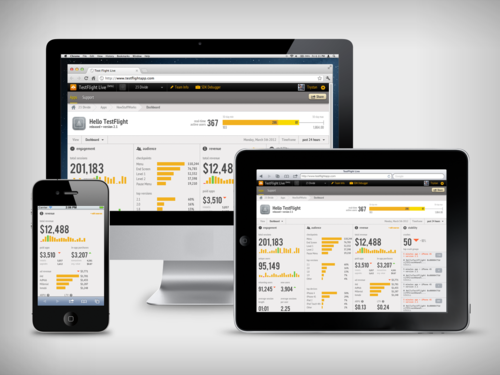 TestFlight, a popular over-the-air testing platform for developers, has been acquired by app monetization service Burstly, the company wrote in a blog post today. Based off Apple’s OTA install technology for beta applications and iOS’ certificate system, TestFlight has been used by thousands of developers in the past year to provide an easy and intuitive way to their users to install beta versions of iPhone and iPad apps without going into the manual process of managing .ipa files with iTunes on a Mac or PC. With a web app that works on desktop computers and mobile devices, TestFlight has powered “over 70,000 developers sharing more than 130,000 apps with a group of 280,000 testers”. The acquisition, explained here, is meant to extend TestFlight’s capabilities as a platform to enable developers to offer beta apps, track revenue and monetization with Burstly, and collect other sets of data and user engagement with a new product launched today, TestFlight Live.

We always planned on launching a production version of TestFlight, but we wanted to push ourselves to start solving production problems and not simply copy the beta feature set. Along with help from the Burstly team, we think we have taken a great first step with TestFlight Live. Our goal with TestFlight Live is to provide a real-time dashboard that displays actions, symbolicated crash reports, and revenue. For the first time, developers will have a single dashboard that provides enough information to derive insights into Revenue Per User (RPU) and Customer Lifetime Value (CLV) to better understand your app business. Previously, this level of information would be from multiple sources and there was no easy way to collect it.

Burstly was the key contributor to the revenue portion of TestFlight Live, in addition to the concept they actually developed the APIs that make it possible. The revenue source options in TestFlight Live enable developers to include app sales data, in-app purchase data, and ad network revenue from multiple partners. You do not need to work with Burstly to pull in any of this data. If you do not want the revenue segment in your dashboard, we have provided a way for you to hide it.

The real-time, mobile-friendly TestFlight Live can be checked out here, and, apparently, developers willing to implement it in their App Store apps will simply have to add one line of code to their existing software to start getting reports from TestFlight Live, which is a free service. TestFlight Live can track things such as crash reports – allowing developers to instantly understand what’s causing an app to crash, thus enabling them to start working on a fix right away – and user engagement in the form of “checkpoints” (milestones that users unlock using an app, such as “launched the Settings screen”), in-app purchases, device types, and OS versions. This system works in real-time, any minute of any day, as long as a TestFlight-enabled app can connect to the Internet. TestFlight Live has a separate dashboard from regular TestFlight, which will continue to be available as a free service to manage over-the-air beta apps.

Burstly integration, on the other hand, opens the door to a bunch of different functionalities, most of them aimed at data gathering in relation to ads and monetization. Burstly can mediate ads from different networks, cross-promote and track installs, provide ads of different shapes and sizes, and offer “criteria” to developers to control what kind of ads are displayed on screen. The service comes with a series of features that are being used by partners such as Rovio, EA, and Zynga. More details are available here.

TestFlight, meanwhile, says that their products and Burstly will remain separate. TestFlight services will remain free, but the developers are looking at paid options for the future. New features on the roadmap (and on track for a March launch) include better performances, a desktop app for developers, and a new UI.

TestFlight, which launched an enhanced SDK back in September, has become one of the most popular options available to developers to manage apps in their testing stages without forcing users to manually install them with a Mac or PC. Another similar service is HockeyApp, which we covered in May of last year (and has improved a lot since). To read more TestFlight’s new owners and the new services, check out the company’s blog post.