In the recent months, TestFlight has become many developers’ favorite way of distributing internal “beta” builds of their iOS applications to testers. Thanks to the over-the-air installation method introduced by Apple in iOS 4, services like TestFlight allow developers to stop worrying about manually sending .ipa files to testers by relying on a unified web interface that collects testers’ UDIDs (deprecated in iOS 5), alongside other device information and app installation data. TestFlight has been largely successful thanks to its ease of use, nicely designed web apps and user adoption – with the release of a new SDK for developers, as noted by TechCrunch, the company aims to take a step further in letting developers access even more data from their testers and beta apps.

The SDK, available here, brings sessions, crash reports and checkpoints to TestFlight-installed apps. This means developers will be able to discover how testers are using their applications, and how far they’re getting thanks to virtual “checkpoints” placed in the app (useful for, say, level-based games, easter eggs or new, unusual interfaces). With in-app updates, beta apps built through TestFlight’s SDK will directly notify users of available updates without the need of checking email for new TestFlight updates. Similarly, in-app questions will enable developers to run small survey directly into their beta apps. 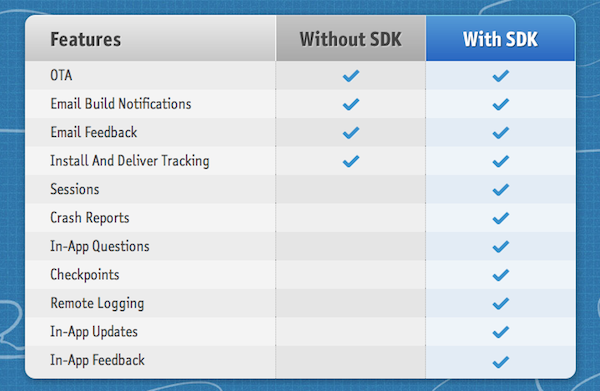 The TestFlight SDK allows you to track how beta testers are testing your application. Out of the box we track simple usage information, such as which tester is using your application, their device model/OS, how long they used the application, logs of their test session, and automatic recording of any crashes they encounter.

To get the most out of the SDK we have provided the Checkpoint API.

The Checkpoint API is used to help you track exactly how your testers are using your application. Curious about which users passed level 5 in your game, or posted their high score to Twitter, or found that obscure feature? With a single line of code you can find gather all this information. Wondering how many times your app has crashed? Wondering who your power testers are? We’ve got you covered.

Information gathered by the TestFlight SDK is sent to the web dashboard in real time, or after an app has been put in the background/terminated. The SDK has been in testing with selected developers for some months now, and the new features seem very welcome among the community. Developers using TestFlight include Spotify, Adobe, Marco Arment of Instapaper, The Iconfactory and Halfbrick, not to mention thousands of smaller “indie” devs trying out the service for the first time.

The TestFlight SDK supports Apple’s Enterprise distribution as well, and is available as a free download here.