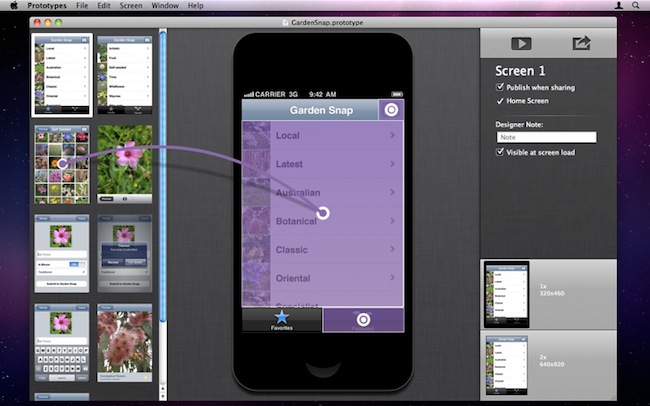 If you’re an iPhone developer, you know how long it takes to turn a mockup realized in Photoshop, Illustrator or Fireworks into a working app that can be tested to see if your idea is actually working on a device’s screen. Whilst an app screen may look good in Photoshop with its fancy graphics and menus you first sketched on your notebook, there’s always the risk that, once running on a real device with an actual multitouch display, your idea will simply suck. Prototypes, a new Mac app released today at $39.99, is a new tool for developers aimed at making the process of converting a mockup into a tappable and shareable application super-simple. Prototypes won’t magically turn your .png’s into Cocoa code, instead it will allow you to display these images on an iPhone or iPod touch screen, and allow users to tap around and get the idea of how an app works.

From Prototypes’ desktop view, developers can import image files and start building a new project. Once all the images are in, Prototypes offers the possibility to create connections and links between objects and pages, add tappable areas and establish dependencies between app menus and sections. What Prototypes basically does is simple: it takes all your app mockups you’ve created in Photoshop, bundles them up in a package, and takes care of including animations, transitions, hotspots, and more to give users the feeling that they’re using a real application while, in fact, they’re just tapping on “smart images” connected by links. It’s genius. Of course you won’t end up using an app on your phone – you’ll simply be running a bookmark saved from the web that’s nothing but a living mockup meant for testing purposes.

Prototypes also offers developers a way to share these mockups with users, their boss, or friends: by hosting a mockup on the free ptyp.es service, devs will be able to easily allow everyone to “install the app” using Mobile Safari and a special PIN code for extra security. You can try one of Prototypes smart mockups by heading over this link with your iPhone, saving the page on your Home screen, and entering 12345678 as PIN.

I think Prototypes is an incredible idea and a great time-saving utility for iOS developers that have been looking for ways to test a mockup without actually writing code. You can get the app here at $39.99.