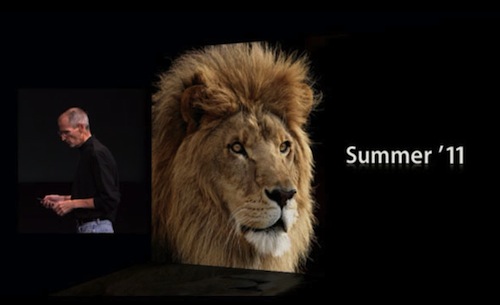 TechCrunch reports tonight Apple has been gathering feedback and crash reports from developers testing the first preview build of the next major version of OS X, 10.7 Lion, and the operating system is now nearing the “GM” stage. When a new OS reaches the Golden Master status, that means it’s usually ready for public release – although Apple previously announced Lion wouldn’t ship until Summer 2011. Indeed, TechCrunch also speculates a public release could happen around the WWDC – which should be scheduled for June as usual.

Specifically, Apple is gearing up to deploy an OS X Lion update to developers that they may be classifying as the “GM1″ release, we’ve heard. “GM” or “Golden Master” is a title reserved for software that is complete. But from what we’ve heard, this is only the initial Golden Master candidate. In other words, don’t get too excited just yet.

If Apple is planning to deploy multiple GM builds of Lion, that would keep them on track for another (possibly final) GM build / release candidate seeded at the WWDC and public availability soon after that. As MG Siegler notes, the GM seed of OS X 10.6 Snow Leopard was released a few weeks ahead of the public launch.

The first developer preview of Lion was seeded on February 24th. Apple decided to rely on the Mac App Store (and the redeem code system) for the distribution of the developer preview, which saw several issues with canceled downloads and slow loading times arose at first. Apparently Apple has fixed the issues with the Mac App Store distributing OS updates on a large scale, and the GM build is almost ready to go. In February, TechCrunch correctly suggested a beta of Lion was about to be released just a day before the actual developer seed. Among the new features of Lion (such as a complete Finder rewrite, new Mail app, multitouch gestures and the Launchpad), many speculate Apple might bring direct integration with the Finder and iOS devices wirelessly, through the new AirDrop utility.