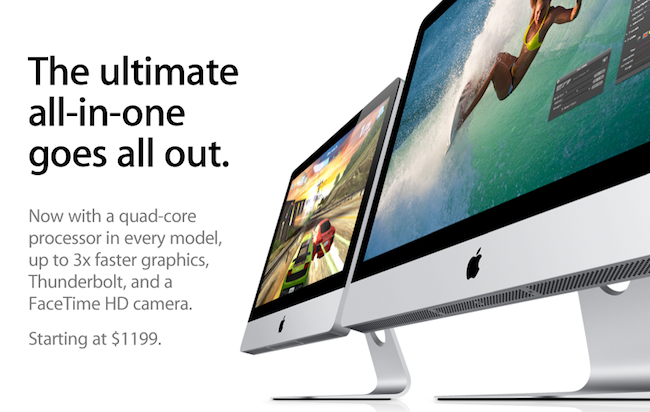 One of the perks of having an iMac, be it a 21.5-inch or 27-inch model, is that you’re signing up for an all-in-one solution that packs everything you need into a “screen” that only needs to be placed your desk, connected to a power source, and it’s ready to go. The iMac – certainly Apple’s top choice in the consumer desktop line – isn’t meant to offer “user serviceable parts”, meaning what you get with Apple’s standard configuration is what you’ll have to stick with until the end of the product’s life cycle. In the past years, however, users who wanted to customize their iMac experience with custom parts like, say, different internal hard drives or better RAM, were able to open an iMac (provided they followed the complex instructions that require to pay attention when disassembling the aluminum enclosure and display) and fit in compatible components to enhance the performances of the machine.

As noted by Michael at Other World Computing’s blog, however, the new 2011 iMacs – the ones with Thunderbolt, Sandy Bridge processors and better graphics – don’t allow you to use any other hard drive but Apple’s custom ones, which are running a custom firmware to provide temperature monitoring through a new 7-pin SATA connector.

For the main 3.5″ SATA hard drive bay in the new 2011 machines, Apple has altered the SATA power connector itself from a standard 4-pin power configuration to a 7-pin configuration. Hard drive temperature control is regulated by a combination of this cable and Apple proprietary firmware on the hard drive itself. From our testing, we’ve found that removing this drive from the system, or even from that bay itself, causes the machine’s hard drive fans to spin at maximum speed and replacing the drive with any non-Apple original drive will result in the iMac failing the Apple Hardware Test (AHT).

In examining the 2011 27″ iMac’s viability for our Turnkey Upgrade Service, every workaround we’ve tried thus far to allow us to upgrade the main bay factory hard drive still resulted in spinning fans and an Apple Hardware Test failure. We swapped the main drive out (in this case a Western Digital Black WD1001FALS) with the exact same model drive from our inventory which resulted in a failure. We’ve installed our Mercury Pro 6G SSD in that bay, it too results in ludicrous speed engaged fans and an AHT failure. In short, the Apple-branded main hard drive cannot be moved, removed or replaced.

To add insult to injury, the latest iMac EFI Update 1.6 unleashed 6Gb/s speeds on two internal ports – and naturally, one of them is the proprietary, firmware-limited, 7200RPM main drive that can’t take advantage of those speeds anyway.

Michael argues that by “closing” the system, Apple’s being evil in not allowing geeks and users who buy stuff on OWC or other Mac hardware shops to upgrade their iMacs to better configurations. As Marco Arment explains though (and I personally agree with him here), the iMac’s not really meant for fiddling and user customizations. Like I said above, when you purchase an iMac you’re signing up for the all-in-one idea of a machine that provides Apple’s latest and greatest innovations in desktop miniaturization technology – by using custom cables, firmwares and hard drives, Apple makes sure you get the best performances out of your iMac, with the “downside” of being unable to customize it. This aspect, of course, can also be seen a way for Apple to make sure that angry modders don’t queue up in the Apple Store asking for free replacements when they purposely opened an iMac to play around with its internals.

You can always find an old iMac online and make it your main machine to mod and improve over time, but you won’t be able to enjoy the improvements in Sandy Bridge architecture and Thunderbolt connectivity. And those, if you ask me, are pretty convincing reasons to get a 2011 iMac and stick with its default hard drives.