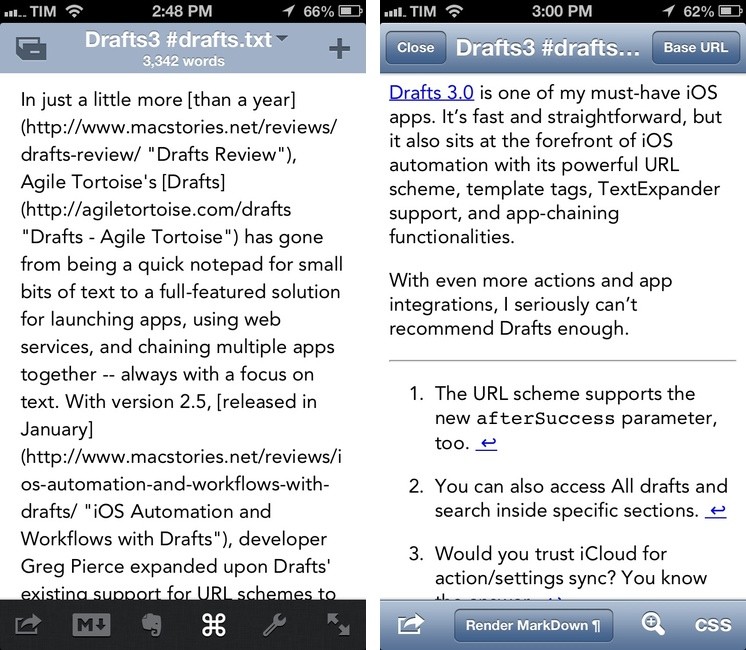 Nebulous Notes is, in my opinion, the most powerful iOS text editor the App Store has seen so far. Here’s what I wrote last August:

I posted a follow-up in October showing the macros I use for faster Markdown editing, and then I noted in a separate post that Nebulous’s preview feature could use some work:

Nebulous Notes‘ own preview generator is far from ideal. You can use your custom CSS to make it prettier, but it still won’t handle footnotes (formatted as once suggested by John Gruber, though Markdown doesn’t officially support them) and the image isn’t centered.

Nebulous Notes 6.1, released today, brings a number of improvements focused on previews and sync with Dropbox. First and foremost, the app now comes with proper MultiMarkdown previews that render footnotes correctly: while images still won’t be resized and centered on screen (this, for me, is an issue on the iPhone’s smaller screen), this new version is undoubtedly a big step forward for those who rely on MultiMarkdown for their daily writing. With the addition of Avenir (in both regular and Next variations), Nebulous Notes previews are now MMD-ready and nice to look at.

The other noteworthy addition is full folder sync for Dropbox. It used to be that, per Nebulous’ own “syncing” mechanism, each text file would have to be manually refreshed to get the latest changes; in 6.1, an entire folder can be synced by tapping the refresh icon in the bottom toolbar. Nebulous Notes is still far from Byword’s no-manual-interaction-required sync, but the change is welcome.

There are other minor improvements and new features in Nebulous Notes 6.1. The iPhone app now has two new one-button toggles to lock the orientation and hide the macro bar; there are new $rline and $lline macros to jump to the end or start of a line; and last, you can now tag files with #hashtags, which I guess can come in handy if you want to search for specific groups of files in that way (I don’t).

Nebulous Notes still needs a complete overhaul in terms of search and sync (and an in-app browser for research purposes would be useful), but version 6.1 is a solid, much-needed update. You can get it now from the App Store.