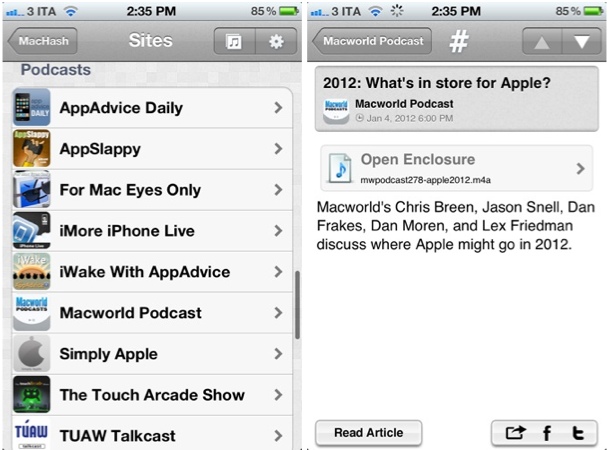 I’ve been a huge fan of MacHash since I started using the service last year. With a straightforward web interface that aggregates the latest Apple headlines from websites like ours, MacRumors, TUAW, Macgasm, AppStorm, iMore and many others and an iOS client that offers more customization options alongside an in-app browser, MacHash has become my go-to place to stay on the top of the latest Apple news and commentary from the community. I’ve already covered MacHash for iPhone and iPad in Episode 5 of App Journal.

An update to MacHash for iOS released last night (version 3.2) brings a variety of bug fixes and technical improvements, as well as support for native Twitter sharing on iOS 5 and a podcast directory. The latter option is something I’ve been looking forward to since it was teased with the 3.0 update: in the Site Browser, MacHash now lists a series of Apple-themed podcasts and allows you to listen directly within the app without using a separate podcast app such as Instacast or Downcast. You won’t find podcast features as deep as the ones from Instacast our review, but you’ll still be able to run audio in the background and listen without having to keep MacHash open. 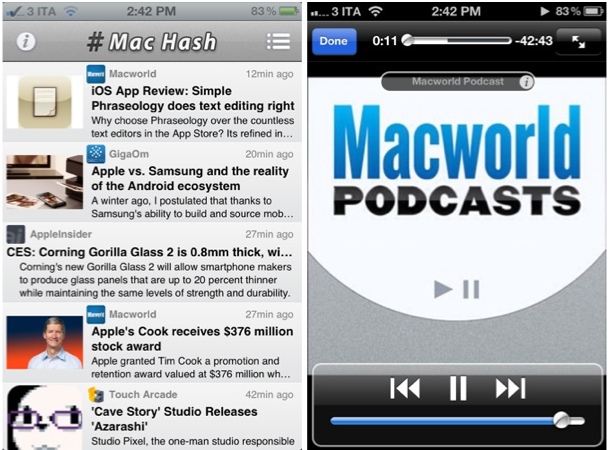 I expect the selection of podcasts available inside the app to grow in the next weeks; in this version, audio functionalities are pretty limited, but I like the fact that Apple news and podcasts coexist within the same application.

Aside from MacHash, the same developers (MobileInfocenter) have also released an update to Tech News Tube last night, reaching version 3.2 and adding podcast support and bug fixes. Tech News Tube is a more tech-oriented version of MacHash, aggregating general tech news from Engadget, The Verge, paidContent, Techmeme, ReadWriteWeb, and many more. The app is very similar to MacHash both in terms of design and functionality, so make sure to check it out if you’ve been looking for a much broader news aggregator with an iOS app.

You can find MacHash and Tech News Tube for free on the App Store.