Amidst iPhone 4S and Siri announcements, the sad news of Steve Jobs’ passing and iPhone pre-orders, App Journal took a break last week and is back this week with quick episode in preparation of the app releases that will follow after the launch of iOS 5 and iCloud on October 12th. You can expect a whole new category of apps for iPhone, iPad and Mac once iOS 5 and iCloud will be available to all users – developers have been spending all summer studying the new APIs, which include pretty neat things like Twitter integration, Newsstand, and iCloud Storage.

In the meantime, I’ve collected four simple apps that I’ve been trying in between Apple keynotes and iPhone 4S news. Check them out after the break, and stay tuned for more App Journal episodes in the next weeks. 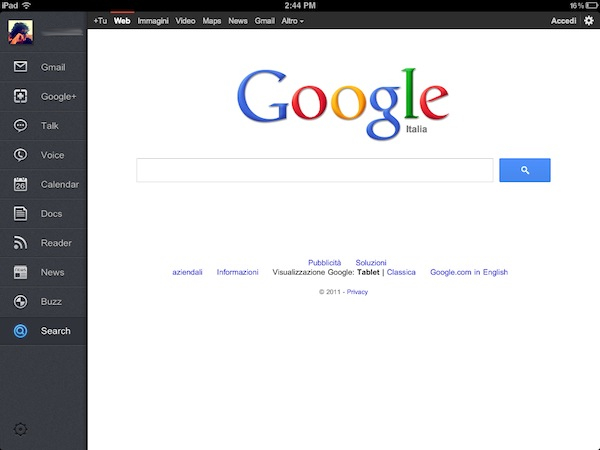 If you have a Google account, it’s likely that you have multiple Google services associated with it. Gmail is an obvious choice, but why not keep your Reader feeds, social adventures on Plus and Calendar events all together in the same account? From the same creators of the popular Mercury Browser for iOS, Mercury for Google Apps is a very simple wrapper for the following Google services:

The app has a sidebar with tabs to load these services, which will appear in their tablet web views that Google has been building over the past year. The app has, however, a native interface for Google Talk and push notifications for Gmail, which seemed fairly quick to me. There are also a couple of other additions, such as offline Gmail access, badges for emails and unread articles, and Twitter sharing. I wouldn’t recommend Mercury over Apple’s native Mail app or an RSS reader like Mr. Reader, but if you find yourself often accessing Google.com services on your iPad, you should give it a try. 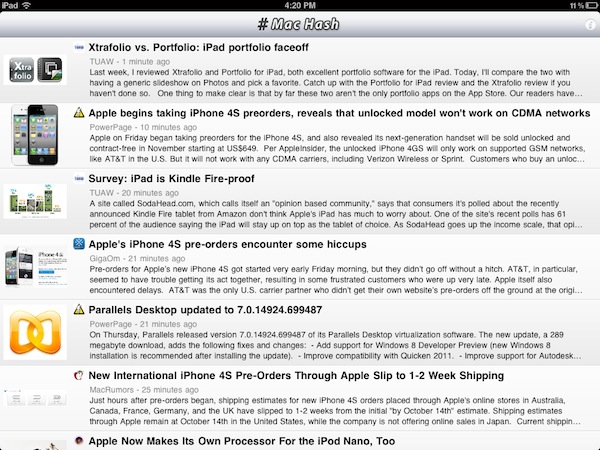 I started reading the MacHash.com website earlier this year, and I’m a big fan. Not just because MacStories is included – MacHash aggregates “Apple news” from a variety of sources such MacRumors, TUAW, Macworld and Touch Arcade. I find MacHash.com to be an incredibly useful resource if you need to catch up on the latest news and reviews from a single page, and I was happy to see the owners remove certain websites that offered nothing but silly speculation and predictions. The MacHash app, which I use every day on my iPad and iPhone, is just as good as it gets: it lets you read the same articles of the web version, and it’s got support for Twitter, Instapaper, Facebook and Evernote sharing. The app is frequently updated, with developers quickly fixing bugs and making improvements to the interface.

I read MacHash every day for my daily news fix, and the app is free on the App Store. Recommended. 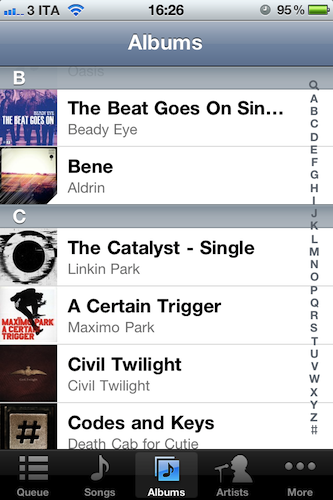 Music+ is a super-simple iPhone app that “fixes” two issues I have with Apple’s Music app: lack of lyrics and queue functionality. On iOS, you can sync lyrics from your Mac or PC, but there’s no button in the Music app to instantly load missing lyrics from the Internet. Music+ does exactly this for virtually any known song, in seconds. Lyrics, obviously, won’t be carried over to the Music app, so you’ll have to keep using Music+ which, by the way, looks very similar to Apple’s own app, so you won’t have to learn a new interface. Music+ also has a queue feature, which similarly to Spotify for iPhone allows you to save songs for later if you already know what you want to listen to, in which order. You can build your queue by swiping on a song, and songs can be removed from the queue at any time.

Free on the App Store for a limited time. 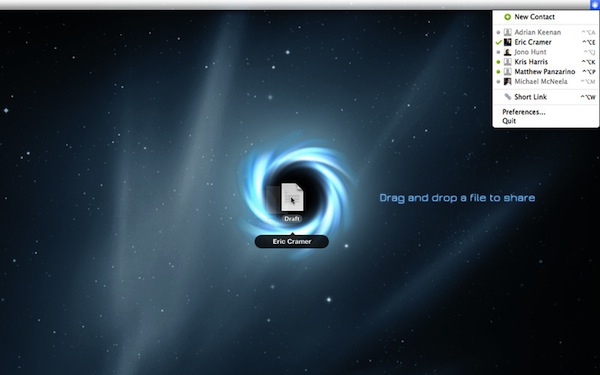 Worml is a new entry in the desktop file sharing panorama that, unlike web-based services like CloudApp and Droplr, doesn’t strictly require to upload files to a server and share them later through a short link. You can do that, too, with Worml’s own “Public Link” feature, but the focus is on the “wormhole”, an animated interface that opens a direct connection on your desktop between you and one of your contacts. Once you’ve created a free Worml account, in fact, you can start adding other people that are using Worml to the app’s Address Book, and if they’re online, the app’s menu will show a green indicator next to their name. You can also assign a keyboard shortcut to a contact, but I found clicking on names and waiting for the wormhole to open on the desktop more intuitive, and fun. The developers have designed an animation that rotates and  “closes” as a file transfer is complete – basically a visually nice overlay for what, in fact, is actually basic peer-to-peer file sharing. Worml will save files in a specific folder on your Mac, and you can tell the app to auto-open received files from contacts you know.

The only problem with Worml is that there’s a chance you might have issues if you’re behind a firewall or corporate network. The developers have released version 1.1 that “works behind most firewalls and restricted connections”, but while trying the app with my fellow coworkers, we were unable to exchange files and see each other’s online status a couple of times. Version 1.1 is undoubtedly better than 1.0 (1.0 didn’t work at all on my home network), but if you know your connection is heavily firewalled or restricted, you’ve been warned.

Overall, Worml is a nice solution for file sharing, especially considering there are no monthly fees or file size limits. $4.99 on the Mac App Store.