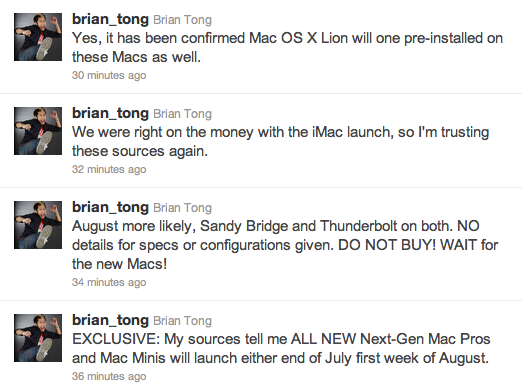 According to Cnet’s Brian Tong, sources have confirmed that updated models of the Mac mini and Mac Pro will come out in August. With a series of tweets on his profile Tong says the “all new” Mac minis and Mac Pros with Sandy Bridge processors and Thunderbolt technology will be released towards the end of July or first week of August. A report from two weeks ago claimed that Apple was looking to refresh the Mac mini and Mac Pro server line-up in July, though Tong seems to believe both the consumer and server lines will receive the much anticipated CPU and Thunderbolt upgrade to follow changes in the MacBook Pros and iMacs.

Tong correctly pinpointed the changes in the 2011 iMac refresh months ago and was the first one to claim back in February that the MacBook Air family was on track for a June update. Several rumors from different publications in the past months have indicated Apple was working on new MacBook Airs with faster processors and Thunderbolt, and the most recent theories suggest the update will come out either in late June or July.

Another report from last week also claimed Apple won’t release new Macs until OS X Lion comes out, and considering Lion’s scheduled July release, it would make sense for Apple to put new Airs for sale (the MacBook Air is now Apple’s most popular notebook) with the new OS preinstalled. In other tweets, Tong also confirms Lion will come pre-installed on new Macs this summer.