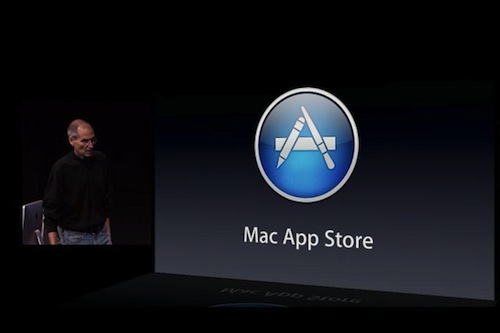 According to a rumor posted by Appletell, Apple may launch the Mac App Store as early as next week:

An inside source has just told us that Apple is targeting a Monday, December 13th launch of the Mac App Store. The company apparently told developers to have their software prepared for a launch as early as Monday the 6th of this month, but our contact would be shocked if that happened at this point. Apple has made no official announcements regarding this, and delays could always happen, but there’s a push to be launched before Christmas, well ahead of the previously estimated January release. Guess from where this push has come.

The website claims that Apple is ahead of its schedule for the new store opening, and Steve Jobs wanted a December 6th launch, but it didn’t happen. We didn’t hear anything from developers about a December 6th release, we just know that there’s a deadline for apps to be submitted that should end sometimes later this month.

At the Back to the Mac event on October 20th, Steve Jobs said the Mac App Store would launch in 90 days – which made us think of a late January 2011 opening. Last week, Apple seeded a new build of OS X 10.6.6 to developers to ensure Mac App Store compatibility and even clarified its position on the availability of trials and beta apps in the new Store.