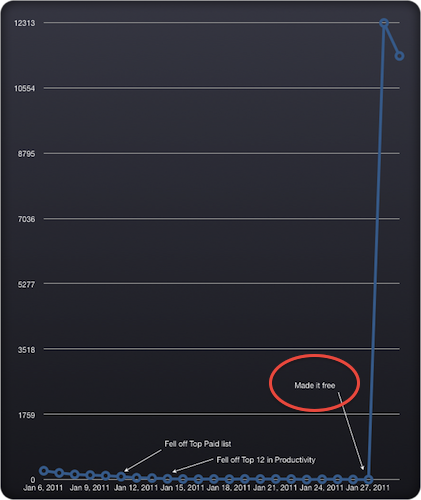 Todolicious is a neat todo app for the Mac we originally previewed ahead of the Mac App Store launch. The app was priced at $4.99 and, since the new Store’s grand opening, has been selling hundreds of copies, slowly sliding to lower sales numbers due to new apps taking over the Top Paid and Category charts. That’s what usually happens after the launch of a new app, when new apps are released and you’re not Angry Birds.

The Mustacheware developers, however, tried to make the app free for two days to see how would the experiment play out. It turns out, making a simple and useful app like Todolicious free for 48 hours over the weekend brought in more than 24,000 downloads. See the graph above to see the difference between paid vs. price drop.

We have heard several stories of success in the Mac App Store in the past weeks. Autodesk announced the new Store doubled a year’s sales of Sketchbook Pro in just 20 days, Pixelmator grossed $1 million in the same amount of time and another developer went from 7 sales a day to 1,500. Given the youth of the Mac App Store, it’s too early to say “free apps do better than paid apps”, because Pixelmator and Sketchbook Pro are here to remind us paid software can do great as well. It also needs to be mentioned, though, that Todolicious was sold at $4.99, not exactly the “premium” $29.99 you would spend for a graphic editing app. As strange as it sounds, many users are willing to pay a premium to download a pro app rather than “yet other 5 bucks” to download a simple Mac app. Still, the numbers are in and they are surprising: 24,000 downloads aren’t bad for a small indie development studio that’s seeking to build a user base for the future iPhone version of the app, and whether or not these 24,000 people will stick around the exposure provided by the Mac App Store and Top Free charts is incredible.