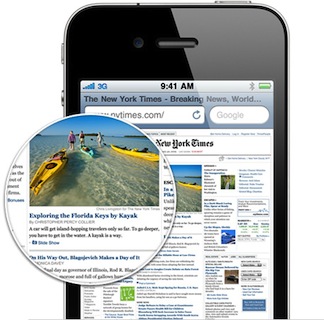 Japanese newspaper Nikkan is today reporting that Apple may have made a display component deal with Sharp for the display of the sixth-generation iPhone. It is based on reports that Sharp has begun preparation for the start of manufacturing in Spring next year at its Kameyama plant in Japan for an iPhone display using next-generation technologies.

Sharp will reportedly be producing “low temperature poly-silicon technology” displays, a next generation technology that will allow displays to be thinner and lighter whilst consuming less power than a current LCD display. The key component of these new displays is the polycrystalline silicon, which enables display drivers to be mounted directly onto the glass and thus have a thinner display. Other advantages of the technology include displaying a more vivid image and enhanced durability because of a reduced number of connecting pins.

Previous rumors had circulated that Apple had sided with Toshiba for future display manufacturing – but a Sharp representative disputed this at the time. In a similar vein, Tim Cook commented in January at the Q1 earnings call that Apple had entered a $3.9 billion component supply deal. He didn’t specify what component it was for, but it was speculated that it was for high-resolution displays and that the deal was between Toshiba, Sharp and a third manufacturer. Sharp was also at the center of another display rumor back in January in which they were supposedly preparing to manufacture glasses-free 3D displays for the iPod Touch.