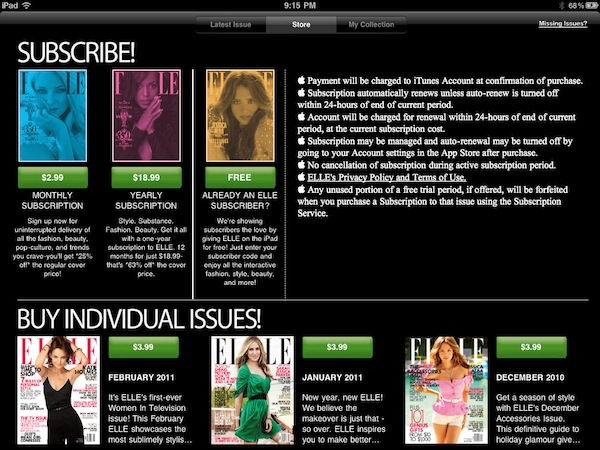 Well, look at that. Apple announced App Store subscriptions earlier today and, contrary to recent speculation, iPad magazines using the new billing system are already showing up in the App Store, before the public release of iOS 4.3. As noted by WSJ and AdAge, Elle and Popular Science are the first apps to come with the new Apple subscriptions, which rely on weekly / monthly / yearly payments and give customers the possibility to decide whether a publisher may access personal information like email and ZIP code or not.

We downloaded Elle magazine for a quick test, and it all works pretty much like in The Daily, the first iPad app to adopt subscriptions. Elle offers monthly and yearly subscriptions, provides a round-up of Apple’s rules on the right (see screenshot above) and, more interestingly, comes with a dedicated section for existing subscribers. All you have to do is enter a “special code” to unlock your free Elle subscription for iPad. 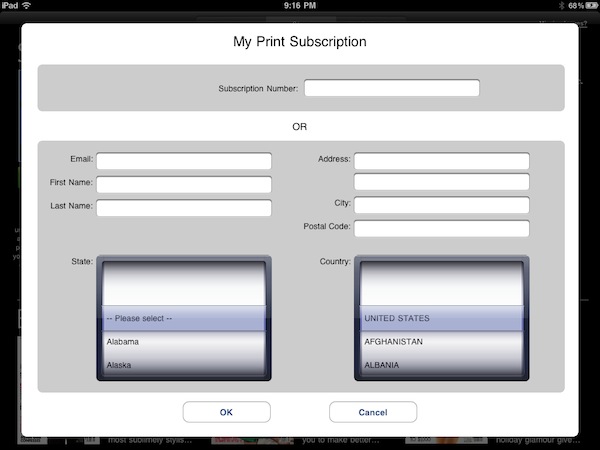 Apple’s current subscription system allows publishers to ask for information and keep 70% of revenue, while Apple retains a 30% cut for transactions happening through the App Store. Publishers can’t insert links to alternative web stores into their apps, but they can provide free access to existing print subscribers. Initial reports indicate that several publishers are unhappy with Apple’s decision to keep a 30% cut and force the use of in-app subscriptions, but it’s interesting to notice that some of them are already jumping on board today, a few hours after the announcement. Publishers of content-based apps will need to implement subscriptions / in-app purchases by June 30.