Yesterday saw the release of thousands of apps optimized, enhanced, or, in some cases, completely redesigned for iOS 7. At MacStories, we highlighted several apps that were ready for the OS’ rollout such as Pocket, OmniFocus 2, or Instacast 4, and then we fired up iTunes – or simply waited for automatic updates to do their magic on iOS 7 – and checked out all the other apps that were also released yesterday. In this post, I thought I could offer a quick overview of iOS 7 updates from four big-name companies: Twitter, Facebook, Yahoo, and Google. 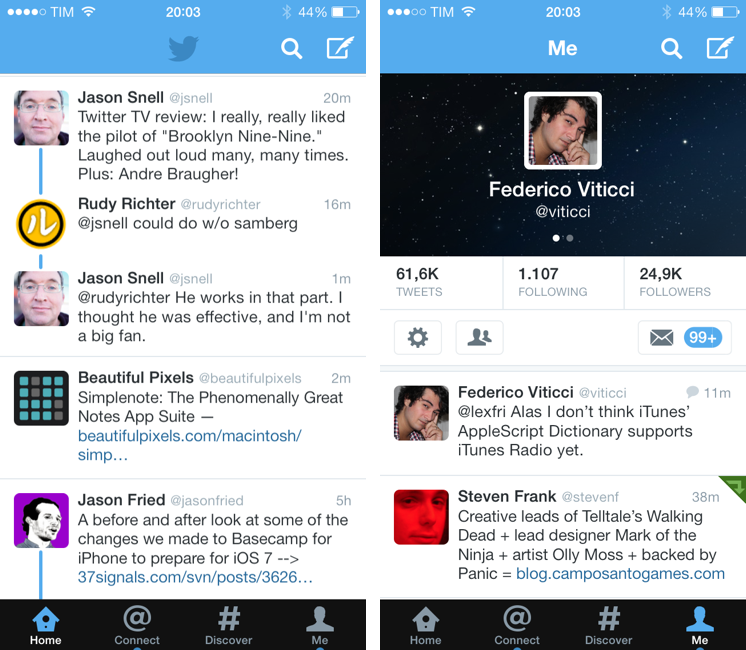 Twitter’s latest update, version 5.11, is mostly unchanged in terms of functionalities, although the changelog says that the app has been “redesigned for iOS 7”. In practice, you’ll see that the Twitter app now comes with tweaked tab and title bars to fit the iOS 7 aesthetic, borderless buttons, and, obviously, the new iOS 7 keyboard when composing tweets. The most notable change is that the status and title bars are now a single blue element (on the iPhone) with the timeline underlapping it as you scroll through tweets. The app supports iOS 7’s back gesture to go back from a tweet’s detail view into the timeline, and, on the iPad, there aren’t any other notable changes besides the slightly redesigned interface.

Twitter is rumored to be working on a major overhaul to their iOS client, which may eschew the tab bar in favor of a more swipe-oriented approach with inline media. Twitter 5.11 is available on the App Store. 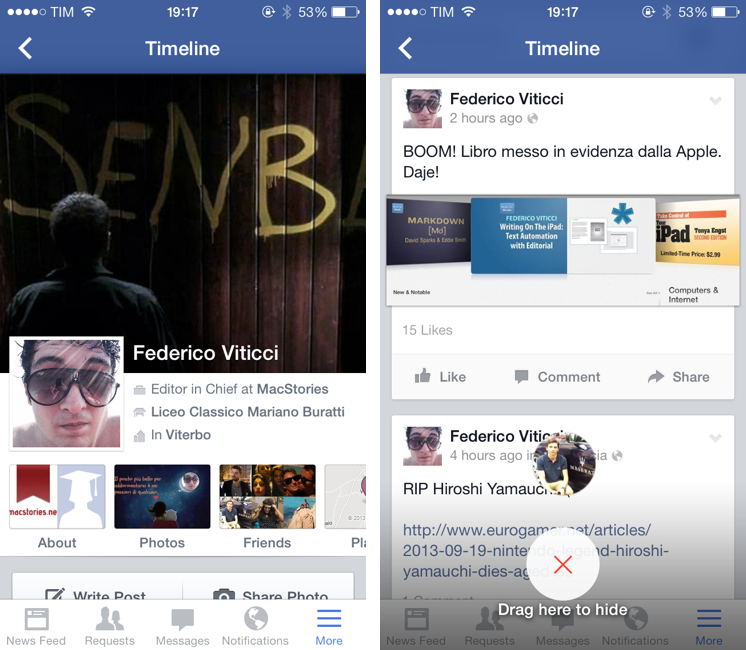 Facebook’s 6.5 update may seem more dramatic than it actually is. Following months of “unofficial” testing of a new layout with millions of selected users (The Verge has more details on the process), Facebook has decided to switch the iPhone app back to the tab bar navigation that it originally had years ago before they implemented the famous side-panel UI. On the iPhone, there are now four tabs at the bottom of the screen to move between News Feed, Requests, Messages, Notifications, and More. On the iPad, the layout is unchanged but the UI is cleaner and texture/shadow-free.

Like Twitter, Facebook has opted for an integrated status bar & title bar view, with the company’s blue color blending both elements in a single one that, unlike Twitter, is shared across the iPhone and iPad. On the iPhone 5, the new integrated top bar features a subtle translucency effect that lets you see blurred content as you scroll through a feed. There is some tweaked iconography (such as the share button), and the app uses the back gesture of iOS 7. In my tests, I have experienced a few scrolling bugs when refreshing the main feed and I’ve seen some janky animations; I wouldn’t be surprised to know these are bugs of the iOS 7 GM that Facebook couldn’t work around in time.

I’m not sure how I feel about the comeback of tabs yet primarily because of chat heads. I don’t like how tapping & hold a chat head now brings up the “delete area” on top of tabs, as I feel the bottom of the app (on the iPhone) is more cluttered than before. I don’t have this issue on the iPad, as Facebook, aside from switching interface elements to their iOS 7 counterparts, essentially changed nothing in the app. Facebook 6.5 is on the App Store. 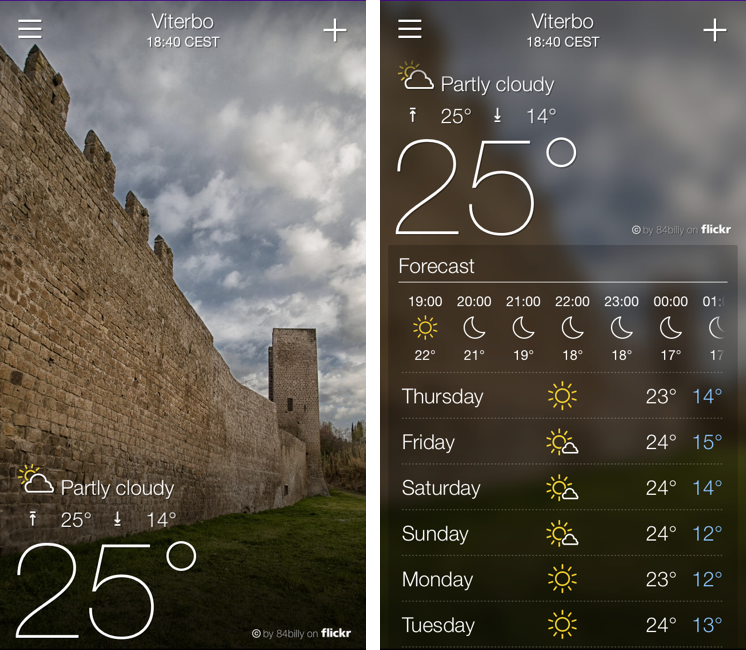 Yahoo’s Weather app already felt ready for iOS 7, and the latest update makes it official. Yahoo Weather features clean typography and makes intelligent use of Flickr photos, which are used as backgrounds for locations. On iOS 7, Yahoo’s choices make even more sense: content extends from edge to edge, photos are blurred as you scroll down to view more weather information, typographic styles feel at home with the system, parallax is supported, and there’s a lovely bouncy effect when swiping between locations. If you were missing the feature, now you can configure wind speeds in the settings of the app. Yahoo Weather is available on the App Store. 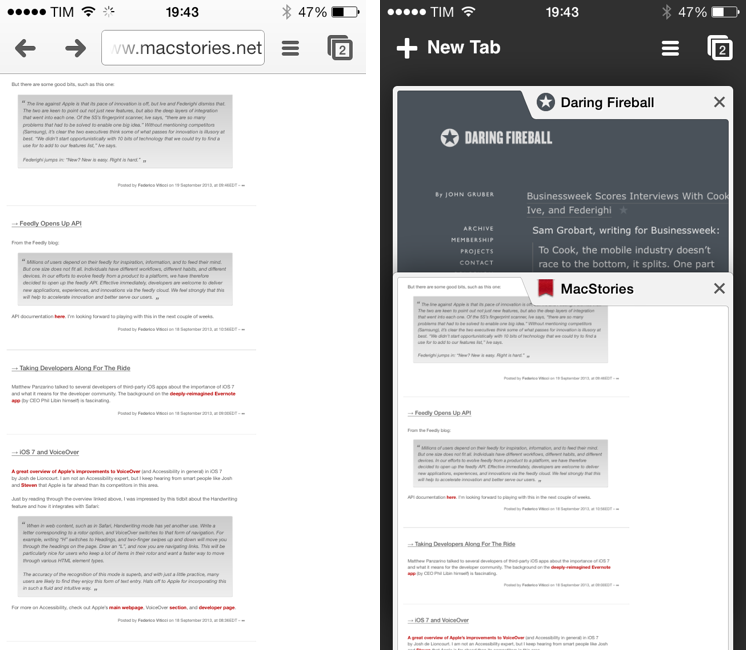 Google Chrome is my favorite browser on iOS, but Google hasn’t brought many changes for iOS 7 yet. The app gains a redesigned Settings screen that is in line with Google’s other iOS apps, an integrated status/navigation bar, and some improvements to full-screen browsing on the iPad. According to Google, stability and security improvements also came with the latest version that’s available on the App Store.

Twitter, Facebook, Yahoo, and Google decided to be ready for iOS 7’s launch day, but, unlike smaller companies or independent developers, they haven’t added major iOS 7-only features to their apps yet. I’m looking forward to seeing what they’ll do next.