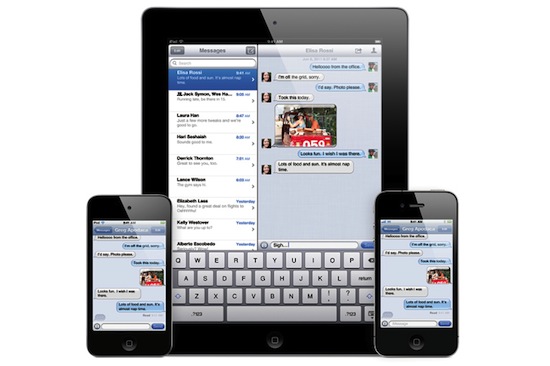 According a series of code strings found by MacRumors in the current version of iChat for OS X Lion, Apple may be building support for the new messaging system first announced at WWDC for iOS 5 devices inside its IM desktop application. The properties found in iChat’s code refer to “read” and “delivery” receipts, two iMessage features that inform users when a message has been read or simply delivered to another device, respectively. These code strings can’t be found in earlier versions of iChat, apparently, and MacRumors believes they can relate to iMessage support being built inside iChat for Lion.

The “timeDelivered” and “timeRead’ fields indicate the tracking of delivery and read receipts for instant messages. These features, however, are not supported in any of iChat’s native messaging protocols, while the same features are offered in Apple’s iMessage protocol. These properties were also not present in previous versions of iChat prior to OS X Lion. We believe the only reason Apple would have added these properties was to build in cross compatibility with their new iMessage protocol.

Ever since its introduction in June, many have wondered whether Apple could support iMessage, a free messaging protocol for iOS devices, on the desktop as well, allowing iOS users to send text messages to Mac users in their Address Book, and vice versa. Unlike FaceTime, iMessage works on both WiFi and 3G, but similarly to Apple’s video-calling solution it’s completely free of charge and works with email addresses and phone numbers – if an iOS user is already in your Address Book and he’s using the same phone number or email, iMessage will work. The service will be iOS 5-only when it launches this Fall, and Apple hasn’t revealed plans for OS X or Windows versions yet. iMessage has been compared to other free messaging solutions, like RIM’s BlackBerry Messenger, or Google’s Huddle.

A few code strings are no confirmation of Apple’s plans to build iMessage for Mac, but if history is of any indication, it would make sense for Apple to support its new app on multiple platforms. Whereas iChat as an app is still nowhere to be seen on iOS, FaceTime as a service was ported to the OS X and later built into every new Mac. For this reason, many are speculating iMessage could follow a similar trend, perhaps as a standalone app, or a service plugin for iChat.

In the past months, a number of fan-made mockups have tried to imagine what an hypothetical iMessage for Mac would look like. Just like the theories floating around, some imagined the service being supported in existing apps like iChat or Mail, others created videos showing iMessage working as a separate app for effortless Mac-iOS communication. Below, we’re embedding an iMessage concept by Jan-Michael Cart.

iMessage is currently available for iOS 5 beta testers, and it’ll publicly launch with iOS 5 and iCloud this Fall.