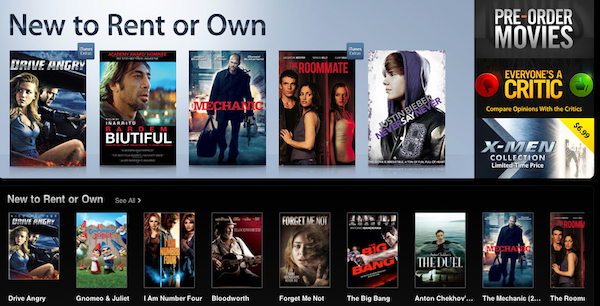 After today’s press release that confirmed Apple will hold a WWDC opening keynote on Monday, June 6, to officially unveil Mac OS X, iOS 5 and iCloud, Cnet reports the launch of the new cloud service from Apple next week may see a last-minute surprise that will make movies and TV shows available on the online “locker”. No details on how users would be able to upload, stream or purchase films and TV shows they don’t own have been posted, but it sounds like iCloud would provide a solution to store files on Apple’s servers to stream them later to a variety of devices.

Feature films could be part of Apple’s iCloud launch next week.

In the past several weeks, Apple executives have stepped up their attempts to convince some of the major Hollywood film studios to issue licenses that would enable Apple to store its customers’ movies on the company’s servers, two sources close to the negotiations told CNET. Apple began discussing a cloud service with the studios over a year ago.

Cnet also reports content providers and Hollywood studios will be harder to convince than record labels and publishers, mainly because of the deals that in the US tie some studios exclusively to a cable company that airs films and shows. For instance, Warner Bros. Pictures, 20th Century Fox, and NBC Universal have an exclusive distribution deal with HBO that would prevent Apple from making their films available through iCloud immediately. As Time Warner’s CEO Bewkes (Time Warner is parent company of HBO and Warner Bros) has made several positive remarks on the new Ultraviolet video standard in the past, however, industry sources claim a deal with Apple and other cloud services could get done, and the exclusive HBO deal reworked to accommodate more distribution methods.

So if Bewkes is a believer what is the holdup? Film-industry sources have say that there’s nothing to worry about, that a deal with Time Warner to relax the HBO window will get done. But can something be completed before June 6?

Whether it can or not, Apple could still roll something out with the other three studios that are without HBO blackout agreements: Disney, Paramount Pictures and Sony Pictures.

Apple has officially announced the iCloud name today, referring to it as “upcoming cloud services offering” that seems to suggest it will go beyond music to offer a broader set of tools for online sync and storage. With the launch of the Apple TV 2nd-gen last September, Apple began offering rentals from ABC and Fox at $0.99 only through streaming, as the Apple TV doesn’t allow for local movie storage.