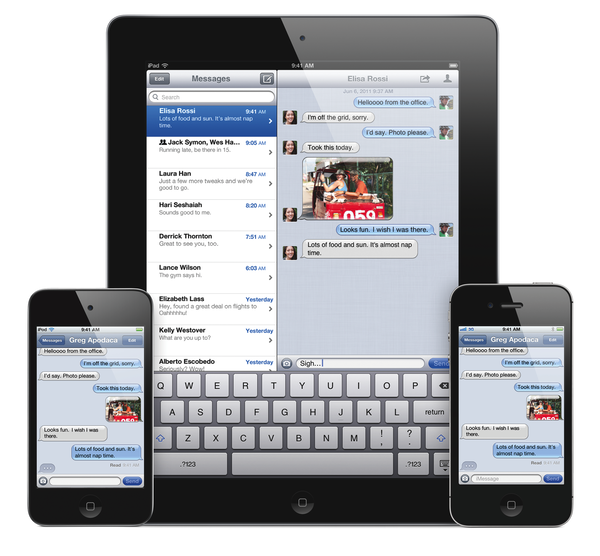 In the past few years, Apple has been rumored several times to be building a mobile version of iChat – its desktop IM communication tool – for the iPhone and iPad. And in spite of the iMessage protocol being essentially a stripped-down version of iChat for iOS users with typing indicators, attachments and even new features like read and delivery receipts, speculation has always pointed at Apple as being developing a full-featured iChat app for iOS to integrate with IM services like AIM and Jabber, just as iChat on OS X.

New code strings found by developer John Heaton inside iOS 5 (via TUAW) are bringing new life to the mobile iChat rumors. But unlike previous speculation, this code seems to indicate Apple may integrate iChat functions with its existing Phone and Messages apps. Speculation on the “facetimeService”, “aimService” and “iMessageService” strings suggests typical IM functions like text and video chat might as well live into a single existing app, rather than be scattered around the system with standalone applications. The Messages app for iOS, in fact, already integrates regular SMS and iMessage, photo and video attachments and group messaging. On the Mac, Apple was rumored to be integrating iMessage into iChat, rather than building a dedicated iMessage app. Putting all the rumors together, could this be an indication of a unified, cross-platform and integrated Messages app coming soon to iOS and OS X with iChat and iMessage functionalities?

Code strings aren’t the most reliable indicators of new features to come, as Apple often likes to bury functionalities in code and hide them from public release, even when they’re fully working and seemingly ready to go. Speculation on iChat for iOS has been growing strong lately especially after the release of iMessage, and many think it’d only make sense for Apple to least extend iMessage’s features to the desktop.