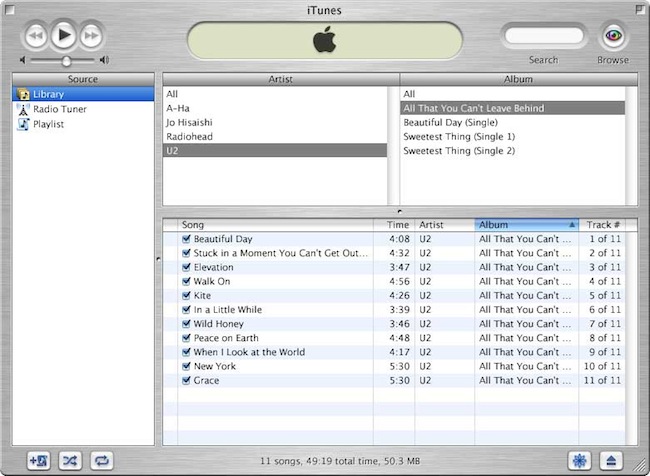 On January 9, 2001 Steve Jobs announced the first version of a new music player and organizer called iTunes at the Macworld Expo. Ten years later, iTunes has reached version 10.1.1 and it has evolved into media organizer and aggregator capable of storing music, movies, podcasts, apps, books, radio stations and playlists. Some say iTunes is bloated, and maybe it is. But truth is, it looks nothing like the brushed metal, young and tiny version we first saw 10 years ago.

iTunes has become the center of our “digital lifestyle”, a strategy Apple CEO Steve Jobs started in 2001 with the “Digital Hub” revolution. And looking back at those promises, there’s no doubt a single software running on our Macs has become the most important part of our workflow. We sync iPhones, iPods and iPads to iTunes, we store media in it, we stream content from iTunes to a variety of speakers and devices. Feature-rich or bloated, it’s undoubtedly deeply integrated with the Mac and iOS ecosystem.

So here’s to iTunes, and the digital lifestyle that’s now synced and stored on our computers and mobile devices. It’s been 10 incredible years, and we look forward to what’s next. Happy Birthday, iTunes.

Below, the first demo Steve Jobs gave of iTunes 1. We know the video quality isn’t exactly good. Also, TUAW has a great roundup of the interface changes from iTunes 1 to iTunes 7.