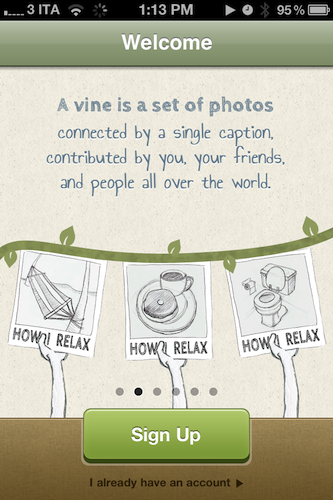 Back in July we covered the release of Photovine for iPhone, an image sharing app developed by Google’s internal Slide team that, among other things, is also responsible for Disco, a group messaging app, and Pool Party. Powered by a slick design and attention to detail, the Photovine app that was released last month didn’t allow everyone to sign up and start sharing photos as the system was invite-only without an open sign-up. With an update pushed last night on the App Store, Photovine has revamped Facebook and Twitter integration from within the app and finally opened registrations without the need of a beta invite.

Unlike the popular photo sharing app and iPhone-based social network Instagram, Photovine doesn’t revolve around the simple concept of photos uploaded to a user stream and shared with followers. Rather, Photovine is based on “vines” – photos connected by a caption and contributed by you, your friends, and other people using Photovine. So, for example, say you’d like to share a photo about your newly acquired MacBook Air, you can start a vine called “My new MacBook” and your friends will be able to let the vine “grow” with new photos related to the caption, and the photo you originally posted. This is best explained by Photovine’s promo video, which we’ve embedded after the break.

Photos in a vine can obviously be liked and commented on, each user has its own dedicated page with a profile picture and followers/following/likes counts, and an Inbox tab in the bottom toolbar allows you to check on messages you’ve received from other users, or notifications such as new followers, comments, and likes. This is not too dissimilar from Instagram’s implementation of “activity”. Users can add new photos to an existing vine (or even “watch” a vine if they’re interested in it) or create a new one from scratch – Photovine comes with a beautiful custom camera interface that lets you snap your own photo, or pick one from the Camera roll. Indeed the whole app sports a gorgeous and clean design that makes it easy to jump through vines, user profiles, and comment on photos shared by others.

Photovine for iPhone is an interesting concept with a good-looking interface and additional social functionalities to forward photos to Twitter and Facebook, and find friends on those social networks as well. You can download Photovine for free on the App Store. 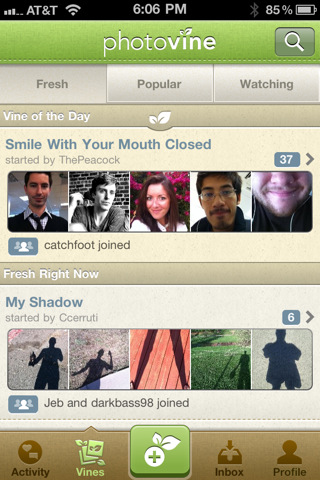 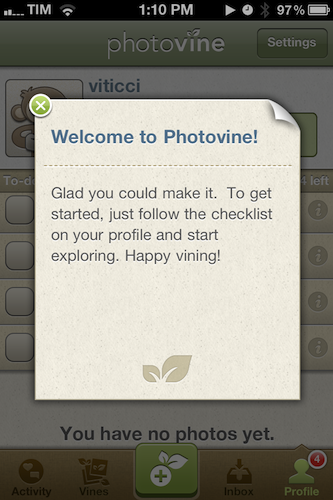 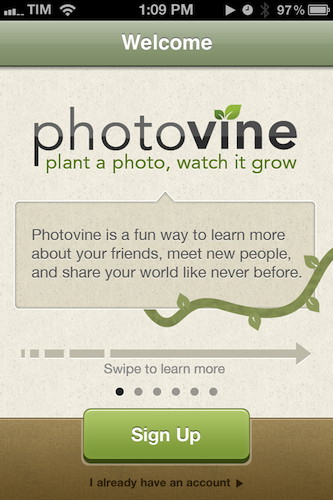