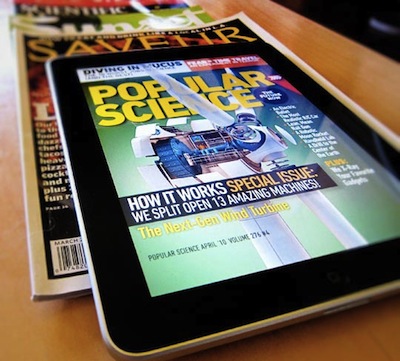 According to the sources close to the Wall Street Journal, Google is in talks with major publishers like Time Inc., Condé Nast and Hearst Corp. to discuss the launch of a digital newsstand for magazines and newspapers that would run on the Android mobile operating system. The move, still in its early planning stages, would be Google’s direct answer to Apple, which has long been at the center of digital newsstand rumors and iTunes recurring subscription speculations. Google’s newsstand, either based on the existing Market or a new infrastructure, would allow Android users to read digital content on the go. Rumors point out to Google willing to share subscribers’ data with publishers.

In recent weeks, these people say, Google has told publishers it would take a smaller slice on any sales they make of Android apps than the 30% cut Apple typically takes on iTunes sales. Google has also proposed giving publishers certain personal data about app buyers to help with marketing related products or services.

For publishers, customer data is essential in order to identify existing subscribers and provide access to extra “packages” such as print editions or additional content on other platforms, like the iPhone or Android smartphones. Currently, some applications in the iPad App Store are offering different methods to “unlock” digital content, like subscriptions sold through the web or in-app purchases. According to the WSJ’s sources, Google is willing to build a system based on recurring subscriptions and customer data sharing. Early in December, Google launched its official Books app for iOS that grants access to a digital “bookshelf” also available on the web.

The Wall Street Journal also reports that development of Apple’s rumored automatic billing system for apps has been growing rapidly and publications are expected to implement it “early this year”. Apple may also offer a way to obtain customer’s data through iTunes, although as an opt-in feature:

Apple is planning to share more data about who downloads a publisher’s app, information publishers can use for marketing purposes. According to people familiar with the matter, Apple would ask consumers who subscribe to an iPad version of a magazine or newspaper for permission to share personal information about them, like their name and email address, with the publisher.

Some publishers remain unhappy with this arrangement because they think few customers would opt to share such data, according to these people.

Publishers are unhappy about Apple’s initial decision to exclude recurring subscriptions and customer data access from iTunes and its App Store model. Subscription-based apps and magazines would still be sold through iTunes, with Apple taking a 30% cut of the revenue. According to previous speculation, Apple was planning to release an updated version of iOS to include iTunes subscriptions months ago, but then delayed the project and is now targeting a January launch with Rupert Murdoch’s The Daily as the first magazine to rely on the new subscription system.