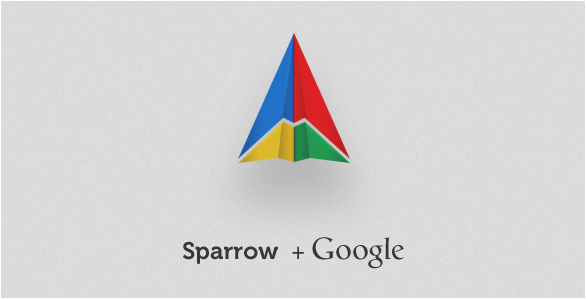 Sparrow, the email client for OS X, just announced they have been acquired by Google. The Sparrow team will join the Gmail team to “accomplish a bigger vision”. Since its release, Sparrow has quickly become one of the most popular mail clients on OS X and, more recently, on the iPhone as well.

We’re excited to announce that Sparrow has been acquired by Google!

We care a lot about how people communicate, and we did our best to provide you with the most intuitive and pleasurable mailing experience.

Now we’re joining the Gmail team to accomplish a bigger vision — one that we think we can better achieve with Google.

According to the developers, while the product has been acquired by Google, it will continue to be available, and the team will still provide support for its users, at least for the time being.

After the release of the iPhone client, the Sparrow team publicly asked Apple to figure out a solution to let them implement push notifications, which Sparrow wanted to use through a different method than the one enforced by Apple. The Sparrow team stated push was coming with or without Apple, but then suggested push would be coming with a yearly subscription after Apple’s decision not to allow their implementation of push notifications.

Recently, Sparrow also announced they were working on an iPad application. However, in an email the team just sent to existing customers, they wrote:

as we’ll be busy with new projects at Google, we do not plan to release new features for the Sparrow apps.

On the other hand, Google’s own Gmail app has always been heavily criticized (in spite of its improvements) for its performances and reliance on web views instead of “native” code in several interactions with navigation, message search, and more. In theory, the acquisition of Sparrow should hint at a major update to the official Gmail offerings for iOS coming in the future, although, obviously, the details are not clear at this point.

Interestingly enough, while Sparrow does have clients for both iPhone and OS X, Google has never offered an official Gmail application for the Mac. Similarly, one of the most prominent features of Sparrow is its ability to pull contacts’ profile pictures from Facebook, a kind of integration we assume would be going away in an hypothetical Google-owned version of Sparrow, replaced by Google+ support for avatars. Again, the same would apply for Dropbox and CloudApp, both of which are file sharing services supported by Sparrow; theoretically, Google would want to replace those features with Google Drive, their service for sharing and collaborating on documents online.

For a background on Sparrow, check out our latest coverage of the Mac client, our review of Sparrow for iPhone, and initial impressions with the Google Gmail app.

Update: A Google spokesperson has provided MacStories with a statement on Sparrow’s acquisition.

The Sparrow team has always put their users first by focusing on building a seamlessly simple and intuitive interface for their email client. We look forward to bringing them aboard the Gmail team, where they’ll be working on new projects.