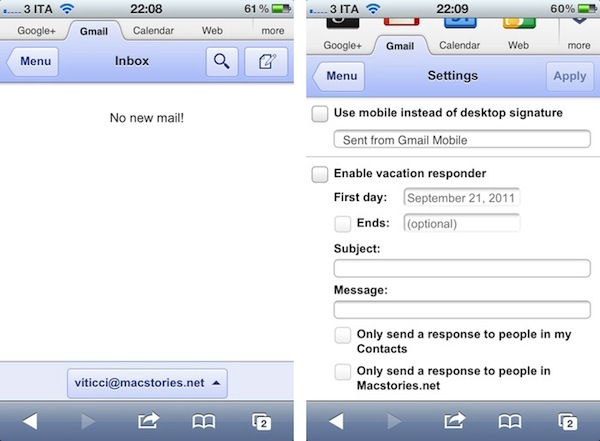 In the past months, Google has released a series of updates to improve the overall experience of the Gmail mobile web app, which works on iOS devices such as the iPhone and iPad, as well as other smartphones and tablets. Google made the mobile web app more accessible and usable with notifications, undo bar, Retina graphics and “pull to refresh”, and today they’ve announced another update that brings Preferences and multiple sign-in to the service when viewed from mobile devices.

Multiple sign-in has been around in the Gmail desktop website for quite some time, and it’s a useful shortcut to quickly switch between multiple Google accounts (and thus Gmail inboxes or Google+ profiles). Starting today, a new sign-in button will appear at the bottom of the iOS web app, allowing you to jump to another account, which will automatically load its Gmail inbox. The feature is already live in Mobile Safari (tested on an iPhone 4 running the latest iOS 5 beta).

Furthermore, Google is now allowing users to set Preferences directly from the mobile web app. The company is highlighting the possibility to create a mobile-only signature, so your friends will associate typos to a smartphone’s keyboard. Also, the Preferences come with vacation auto-responder settings, and a few more options.

We know that autocorrect and other mobile spell-checks can be frustrating as you are typing on the go. Let your friends know that you are responding via your mobile phone so that they understand why you might have sent a message that you are meeting for “monitors” and not “mojitos”. It’s an easy way to make them understand why your message might be short or have a few typos. To create a mobile signature, from the menu view, press the new settings icon, choose your signature, and then check the box that tells us you want to activate it. If you ever want to disable the mobile signature, you can uncheck the box and we will use your desktop signature instead.

Google notes that each Gmail account can have a separate bookmark. On iOS devices, you can save a Gmail shortcut to the Home screen by tapping on the Action icon in Mobile Safari, and then Add to Home Screen (Gmail’s webclip icon has been optimized for the Retina Display as well).