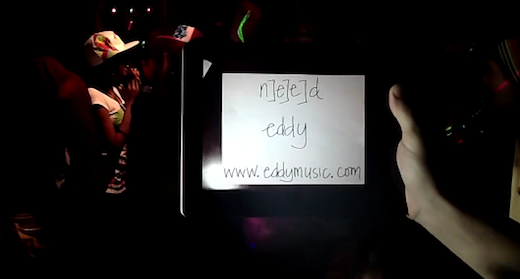 In Cody Fink’s review of the iPad 2’s camera and photo and video examples of what the results look like for the end user, we saw the iPad 2 takes some decent photos and 720p videos for carrying the same cameras of the 4th generation iPod touch, although Cody noted picture quality was suffering from a bit of grain being captured by the lenses chosen from Apple. In spite of a quality clearly inferior to that of the iPhone 4, I still think the average user is going to be more than okay with these photos and media ending up on Twitter, Facebook, and Flickr.

What we’re seeing now, though, is the iPad 2 being used as a video capturing tool in professional environments. This video for the song “NEED” by Eddy was shot entirely using 4 iPad 2 units in a low-light set with pro and DIY steadicam rig. Remedy Films was apparently one the first studios to understand the potentialities of the iPad 2 and decided to give it a shot, literally, to see how well it would perform to record a music video and, why not, gain some free publicity from Apple blogs like ours finding this experiment incredibly cool.

We knew it wasn’t designed as a professional videocamera in the slightest, so we would be stuck with whatever results we got. We probably shouldn’t have filmed in a dark setting, but it actually worked well in a “party” environment, plus it fit the song perfectly! We still treated the cameras as “professional cameras.” we had one mounted to a steadicam rig, one was on a Kessler Crane Cineslider, and the other one was on a DIY hand held rig. The fourth iPad was held by Eddy for a few shots of her singing and dancing.

The shooting session took 5 hours, whilst editing required 12. I don’t think Remedy Films used iMovie for iPad to edit the whole thing, but it needs to be mentioned that they spent 8 hours in line to get their hands on 3 iPad 2s. You can check out the video below. Now here’s to hoping someone will release a music video shot with the iPad 2, edited in iMovie, based on a song recorded in GarageBand.