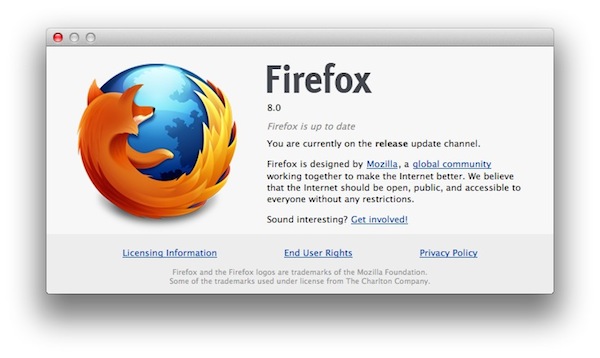 In late September Mozilla released version 7 of its Firefox browser, and as part of the company’s new fast release cycle we noted a few days after the release that a beta of Firefox 8 had already been seeded to developers. In the article, we noted Mozilla promised Firefox 8 would deliver better tab management, deeper Twitter integration, and new features for web developers.

Uploaded to the company’s FTP servers a few days ago, Firefox 8 has been officially released today, with a blog post from Mozilla outlining the differences from the previous version. As with the Firefox 8 beta, Firefox 8 final comes with an option in the Preferences to load existing tabs (the pages you left open the last time you quit the browser) only when they’re selected. This should improve the browser’s startup times, as it’s no longer forced to reload all tabs upon launch.

Another minor new feature is the addition of a Twitter icon in the app’s search box. Mozilla says “Twitter search is currently available in English, Portuguese, Slovenian and Japanese versions of Firefox”, and the new options basically just loads a new Twitter search page for anything you type in the search field – don’t expect Firefox to smartly recognize @usernames or #hashtags, and open Twitter profiles or hashtag pages instead of plain search.

Alongside better handling of third-party add-ons, security and stability fixes, Firefox 8 introduces a series of improvements for web developers:

As far as Lion support goes, whereas Google updated Chrome to take advantage of the OS’ new native scrolling and full-screen mode, Mozilla’s browser still lacks any sort of Lion integration and support for new functionalities.

To read more about Firefox 8’s new features, head over Mozilla’s blog post on the update. Expect a beta of Firefox 9 to become publicly available soon; you can download Firefox 8 from Mozilla’s website here.