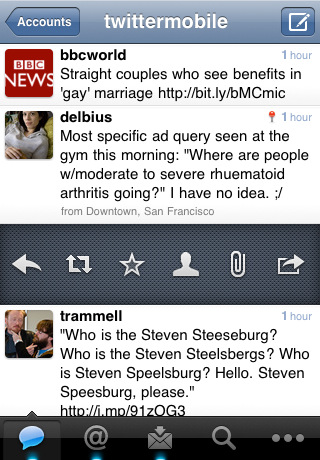 Following user criticism (an euphemism) and complaints from several aficionados of the official iPhone client, Twitter released an update to the iOS app today, and they have removed the Quick Bar. Kindly called “dickbar” by many users on Twitter in the past weeks, the bar used to appear along the top of the main timeline to show promoted and regular trends. We didn’t like it. Nobody liked it. And now it’s gone.

Rather than continue to make changes to the QuickBar as it exists, we removed the bar from the update appearing in the App Store today. We believe there are still significant benefits to increasing awareness of what’s happening outside the home timeline. Evidence of the incredibly high usage metrics for the QuickBar support this. For now, we’re going back to the drawing board to explore the best possible experience for in-app notification and discovery.

Twitter also says the Quick Bar could have evolved into a full-featured notification system for mentions, direct messages, and more. I guess we’ll never know at this point, or perhaps in-app visual notifications will be implemented in other ways in the future. We’ll see.

The updated, Quick Bar-free Twitter app is available in the App Store now. The latest version also introduces bug fixes, and we hope the company is referring to the annoying DM bug here. The bug has been around for ages now, it was fixed in a previous update, then it mysteriously came back. It’d be nice to see that gone, too.