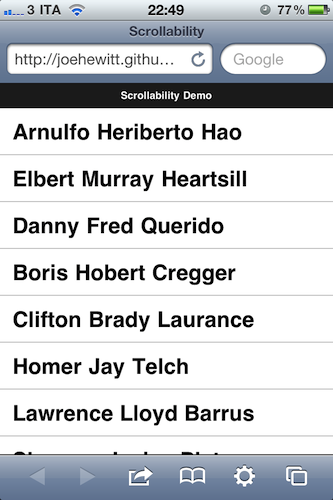 Joe Hewitt, creator and former developer of the Facebook app for iPhone, announced earlier this month his intention to leave the company to focus on personal projects to build tools for designers, programmers, and writers. The first result of his renewed development efforts is Scrollability, “a single script” that has no “external dependencies” and it’s aimed at dramatically improving scrolling on mobile web applications. One of the biggest problems of web apps, in fact, when compared to native iOS applications, is that web apps usually suffer from bad scrolling performances and an overall feeling of “slowness” that most App Store apps don’t have because of the tools and frameworks they were written with.

On the official project’s page, Hewitt explains Scrollability works best on the iPhone 3GS, iPhone 4 and iPad. Once implemented on a webpage (by adding a few “CSS classes to scrollable elements”), the effects of Scrollability can be immediately noticed thanks to a general snappier and more responsive scrolling than regular iOS web apps. For now there’s only a Table View demo out, and you can try it by heading over this link with your iOS device.

Hewitt also details some of the changes that are being worked on:

Bugs Being Worked On

Scrollability is available on GitHub, and you can follow Hewitt’s Twitter account to stay updated with the latest changes and modifications to the script. With the improvements introduced in Mobile Safari after the iOS 4.3 software update, there’s a huge opportunity for web developers to write apps for iPhones and iPads that don’t require Apple’s approval; Joe Hewitt’s project may become obsolete as soon as next month when Apple previews iOS 5, but it’s still worth checking it out now and testing it on mobile web pages. [via ReadWriteWeb]